The Citizenship Amendment Bill opens a path to naturalization for persecuted Hindus, Christians, and Sikhs, but excludes Muslims. 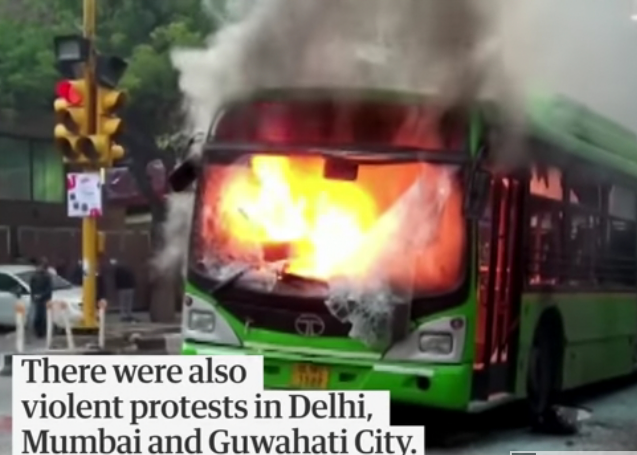 The Citizenship Amendment Bill, passed by the Lower House of the Indian parliament by 293 to 82 votes, opens the path to naturalization for the followers of six faiths, including Hindus, Sikhs, and Christians, but excludes Muslims.

Indian Prime Minister Narendra Modi backed the legislation adopted last Tuesday as a “landmark day for India and our nation’s ethos of compassion and brotherhood!” he said. “This bill will alleviate the suffering of many who faced persecution for years.”

Since winning a two-thirds majority in the May 2019 General Election, Modi’s Hindu nationalist alliance has angered the country’s Muslim population with a series of measures. In August, India revoked the special status for the Muslim-majority Kashmir region, a move that could open the northern Indian state for Hindu immigration. Earlier this year, New Delhi excluded more than 2 million immigrants, predominately Muslim, from its citizenship enrollment drive in north-eastern India.

Police fired shots in the air and volleys of tear gas to push back thousands of demonstrators in the Indian capital New Delhi on Tuesday as protests raged against a new citizenship law that has angered the country’s Muslims.

The situation spiralled out of control after demonstrators threw stones at policemen who were holding them at a barricade, police officer Rajendra Prasad Meena said.

In another demonstration in West Bengal state, protesters opposing the new laws hurled a homemade bomb at policemen, injuring three of them. (…)

Despite days of violent demonstrations, Prime Minister Narendra Modi’s government dug in its heels on Tuesday.

“Both my government and I are firm like a rock that we will not budge or go back on the citizenship protests,” Home Minister Amit Shah told the Times Network.

In the clashes in Delhi’s Seelampur area, police fired shots in the air and lobbed more than 60 rounds of tear gas at protesters, some with their faces covered, who threw bricks, stones and bottles at police.

About 10 people, including policemen, had been brought in into the Jag Pravesh Chandra Hospital with injuries, a hospital official said.

The mainstream media sided with the Indian Muslims rampaging on the streets and criticized New Delhi for “provoking” them.

The New York Times blamed Modi’s government for angering Muslims by adopting “provocative policies.” The newspaper declared: “As the government of India pushes increasingly provocative policies, it is using a tactic to stifle dissent that is more commonly associated with authoritarian regimes, not democracies.”

Qatar-funded Al Jazeera TV network called the legislation allowing citizenship to Hindus, Sikhs, and Christians fleeing Islamist onslaught “anti-Muslim.”  “The major criticism of the law has been that it prevents Muslims from seeking citizenship, something similar to US President Donald Trump’s Muslim ban under which Muslims from few countries were banned from seeking asylum,” the broadcaster added.

The sharpest criticism of them all came from Germany’s state-run broadcaster Deutsche Welle, claiming that “India’s move to exclude Muslims from seeking a fast track to citizenship is blatantly discriminatory.” The German broadcaster told India to adopt a refugee policy akin to that Chancellor Angela Merkel’s: “The new citizenship act shows us that India needs a refugee policy in line with international law, and not a law based on discrimination and dictated by an ideology that makes use of religion for political gains.”

While the “discriminatory” wordings of the new law trigger Indian Muslims, non-Muslims face forced conversions, deadly pogroms, and ethnic cleansing under the Islamic Sharia rule in neighboring Pakistan, Afghanistan, and Bangladesh. Pakistan’s non-Muslim population has declined from 23 percent in 1947 to merely 3 percent today, a 2013 report published by the Hudson Institute showed. Meanwhile, India’s Muslim population grew from 35 million to 200 million in the same period.

It is laudable of Modi’s Hindu nationalist government for looking beyond its narrow ideological confines and extending citizenship rights to persecuted Christians and other faiths. Christians have borne the brunt of Islamist persecution in neighboring Pakistan, with their churches bombed, priests murdered, and innocent believers hurled before Sharia courts on false blasphemy charges. According to watchdog group Open Doors, hundreds of “Christian women and girls are abducted every year and often forced to marry Muslim men.” The Hindus and Sikhs minorities share the same fate in the neighboring Muslim majority counties. India’s Hindu majority needs to reach out to the Christian and other faiths to counter the surging tide of violent Islamism in the region and beyond.

I always like to prove I don’t beat my wife by beating my wife.

The Religion of Peace, at it again. India is taking proper precautions against a homicidal cult.

“India decided not to any longer simply be a mute witness to this torment and with this new law has decided to allow these [non-Muslim] persecuted minorities, who have fled to India, to be given a fast-track to citizenship. Critics say this is discrimination against Muslims. Why are they not included in this program? But the answer is obvious: no Muslims are being persecuted, kidnapped, forcibly converted, or killed in Pakistan, Bangladesh, or Afghanistan. India is offering a rapid road to citizenship for those refugees — Hindu, Sikh, Buddhist, Jain, Parsi, and Christian refugees — who suffer from persecution by Muslims. The law is sensibly meant to cover only those refugees coming from India’s immediate neighbors – Pakistan, Afghanistan, Bangladesh [all MUSLIM countries] — it would not cover, for example, Christian refugees fleeing mistreatment in Egypt, Iraq, or Iran.”

Yes, indeed. JW is gracious enough to regularly repost and mention my work.

At least India knows how to say no to muslims. They wanted parts of India, and got them. Now, they want to come back? No.

Muslims are ALWAYS outraged. It’s who they are.

notamemberofanyorganizedpolicital in reply to snopercod. | December 18, 2019 at 4:47 pm

That’s the DEMS all over……

“They called us violent? How dare they! Let’s riot, burn, and pillage until they take it back!”

notamemberofanyorganizedpolicital in reply to georgfelis. | December 18, 2019 at 4:48 pm

Exactly what we should do to leftist D’Rats who flee the stinkholes they created by moving to conservative states and then trying to turn their new home blue.

Leave it to the NYTs. How do you do something WITHOUT angering muslims.

All this rioting proves the point that the law is just. None of these animals deserve citizenship as they are not civilized enough.

I’d imagine the Indians believe they adequately accommodated their Muslim population in 1947 when they carved out Pakistan exclusively for them. What more can they do?

surrender the rest of their country, of course.

Again, I ask, why don’t Muslim-majority countries take in refugees who profess Islam?

Jordan and Egypt did at one time. And learned a hard lesson. Even Jordanian Muslims from the West Bank, who suddenly called themselves “Palestinians” rioted, engaged in unprecedented crimes of every nature imaginable, and attacked the Christian community. Egypt had a similar experience. Lebanon, a Christian country, was so flooded with these animals is tipped into Muslim majority and fully a quarter of the country is dangerous to either Christian, Druze, Sunni or Shia, depending who resides in the ghetto.

Proving the worth of the law.

Well, that is convincing.

How about those rioting Pakistani lawyers attacking a hospital with resulting patient deaths?

I think India is setting the world’s standard on muslim immigration. Japan has always had it but India knows that they are never satisfied and always want more. They offer nothing to any host country except potential violence and unrest. I can see the US having a bill submitted in Congress that forbids any immigrant that puts their laws above our Constitution. Islam does just that.

It’s just like London in Portland Oregon where this is just the latest incident of this to happen again in Portland.

We need butter knife control in this country!

It’s interesting to note that almost every time Muslims outside the U.S. claim to be victimized or slighted in some way, they respond with mob violence and intimidation, thus confirming critics’ assertions that the supremacist, totalitarian and belligerent ideology of “Submission” is inherently incompatible with civil comity, religious pluralism and secular democracy.

It’s long past time to ban the practice of Submission, entirely, to raze its indoctrination centers and mosques, and to unequivocally condemn it as the greatest threat to global peace.