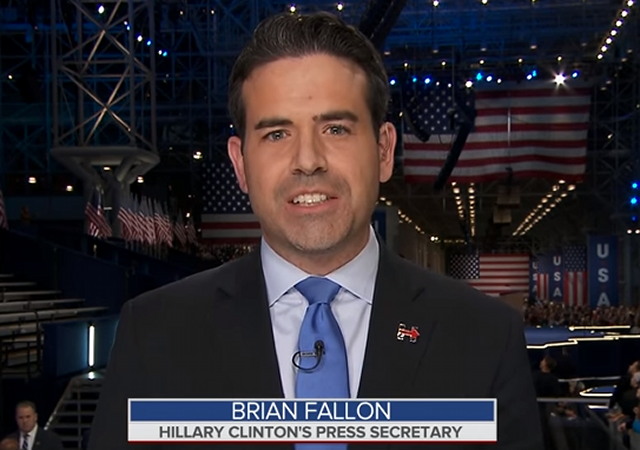 Brian Fallon was the press secretary for Hillary Clinton’s 2016 campaign. Now he is the executive director of a far left organization called “Demand Justice” which has repeatedly gone after Supreme Court Justice Brett Kavanaugh.

In the same way that leftist groups target the advertisers of conservative media personalities like Tucker Carlson, Demand Justice is going after people and groups who support Kavanaugh. The goal is to delegitimize Kavanaugh and Supreme Court Justice Neil Gorsuch.

A former Clinton aide’s non-profit is attempting to shame Facebook and a slew of major law firms for supporting a conservative group’s event that it alleges was “rebuilding” Supreme Court Justice Brett Kavanaugh’s image.

The group, known as Demand Justice, is led by Hillary Clinton’s former press secretary, Brian Fallon, who reportedly indicated support for court packing after Justice Kavanaugh’s and Justice Gorsuch’s confirmations — both of which he claimed weren’t “legitimate.”

The ads will appear on Linkedin and Facebook, focusing on the top sponsors of the Federalist Society’s annual dinner where Kavanaugh spoke, the Associated Press reported on Thursday.

They feature photos of a snarling Kavanaugh, along with Christine Blasey Ford, the woman who accused him of sexually assaulting her when they were teenagers, a charge he denied.

“The Federalist Society is rebuilding Kavanaugh’s image” through events such as its annual dinner, the ad charges, so why are the law firms paying for it?

Kavanaugh got a standing ovation at the Federalist Society event, and that’s apparently a big problem for Fallon’s group:

This standing ovation for a man credibly accused of sexual assault was brought to you by @facebook.https://t.co/iDL5IPrzQd

The Demand Justice website claims that the United States Supreme Court has been hijacked:

The Supreme Court has been hijacked & democracy is at stake

There’s one area where Donald Trump and Republicans are quietly remaking America with almost no pushback. The federal courts are supposed to be the place that protects the rights of all Americans, but Trump is now filling them with judges who are loyal to him and his agenda.

Trump’s judges are overwhelmingly white men, unqualified for their posts, and consistently hold extreme, right-wing views. His nominees have a record of favoring big corporations over workers. They have fought to restrict women’s access to reproductive health services and deny equal treatment to LGBTQ Americans.

Trump’s judges also have a clear record of bigoted views when it comes to race. His nominees have defended voter suppression tactics, promoted the racist birther conspiracy against President Obama, and even defended the Ku Klux Klan.

One of their suggested remedies for this is packing the court:

If you agree that the Supreme Court is in need of major change, join us in calling for these reforms now.

They claim the Supreme Court has become too political. Do you think they would say that if a Democrat president was choosing new justices? Of course not.

If you thought the battle over Kavanaugh was ugly, just wait until Trump gets to nominate another justice.

Well Brian, look inside your own ranks for “injustice”. This sort of thing will keep Brian from accidently committing suicide.

You have to realize the Leftist organizations have billions of dollars at risk here. They have to get power in order to channel fresh cash into their major causes such as global climate change and splintering the country into as many shards as they can.

This means they can afford to spend pocket change of a few million a year on *each* failure of theirs to turn it into an eternal source of blathering hatred to distract conservatives. Plus, each sub-organization they set up can be semi-self-supported by way of donations from gullible liberals. Heck, there are still loathsome little toads spawned by Indecision2000 running around, building their conspiracy theories and hissing at any Republican who was associated with GW Bush.

Expect the Kavanaugh Smear to be self-supporting for the next few decades, along with Stacey Abrams and the Georgia governor race perpetual delusion, and every single discredited lie from the Steele report. In 2050, the Dems will still be flacking the mythical pee tape.

In 2050, the Dems will still be flacking the mythical pee tape.

How long did it take them to move on from Sacco & Vanzetti, or the mythical Businessmen’s Plot?

Though the one about Bush Sr going to Iran to get them to keep the hostages until after the election only lasted about 5 years. I think they forgot about it when they got all excited about Iranamuck (the arms-for-hostages trade / indirect funding for the Contras).

I’m looking forward to the circus that will take place when RBG dies. There’s no telling what dirty tricks the Dems will try to torpedo anyone Trump nominates to replace her.

Trump will probably nominate a woman to replace RBG. That will make the Dems reluctant to fabricate a lurid sexual fiction, like they did with Thomas and Kavanaugh. I suspect they will look at all the decisions the nominee has made as a judge, and try to find a sentence that they can take out of context and turn into a big deal.

It will be interesting to see what kind of excuse they will find to delay and derail the nominee. Whoever the nominee is, I hope she is ready for the mud wrestling that the Dems will drag her into.

The D’rats will do a Palin job at absolute minimum.

Trump will probably nominate a woman to replace RBG. That will make the Dems reluctant to fabricate a lurid sexual fiction, like they did with Thomas and Kavanaugh.

Don’t bet on it. You’re probably right that it won’t be sexual, but it will be personal, not just criticizing her decisions. Probably something racist; they’ll claim that in high school or college she wore blackface or a hood, or both, and they’ll come up with black witnesses who will claim she said horrible things to them.

Funny how the left seem to think that a liberal court which legislates from the bench is perfectly fine, but a court that adheres to the Constitution is dangerous and extreme.

Anyone care to guess which is the party that most resembles Stalinist views of power?

This explains a lot! If this moron was the hildebeast’s PR man then we know what kind of professional he is.

Monotonic divergence. Now we know the faith, religion, and ideological bent of the hunters and judges.

He’s taking this stance because he doesn’t want to be “robbed and killed” outside a Starbuck’s in DC in the wee hours.

This white guy sure does a lot to pretend he is fighting for nonwhite. Last time I checked Clinton was white, Obama might as well have been…and black unemployment is the lowest in history…with more blacks deciding to reenter the work force and many young actually thinking that after high school or better, a job is really waiting for them.

They want to discourage any appointee who doesn’t look forward to a lifetime of harassment. And they know the Right won’t do the same to Leftoid appointees.

But here’s a heck of an idea—assign legislation exclusively to the Legislature, and policy questions to the Executive. This will put both these functions in the hand of elected officials, and so indirectly back in the hands of the voters. Not even a leftist can object to that.

They’re all panicking about the corruption and treason Barr will soon reveal. They need a distraction for their useful idiots.

Are the dim-witted Dhimmi-crat zealots so completely obtuse that they can’t comprehend how utterly Orwellian and totalitarian this ridiculous “credibly accused” conceit is?

“Credibly accused” is a rhetorical device that is right out of a Soviet Union playbook. In a just society governed by the rule of law, mere accusations — especially transparently contrived and politically-motivated accusations — are meaningless and shouldn’t carry any credibility whatsoever.

Proof, evidence and a conviction secured after a fair trial, are what counts.

The Dhimmis are vile apparatchiks.

They claim the Supreme Court has become too political. Do you think they would say that if a Democrat president was choosing new justices? Of course not

Of course they wouldn’t, because they’re dishonest, but that doesn’t necessarily mean they’re wrong. The show could easily be on the other foot, and what would we want then? We might wish for something like an 18-year fixed term, with nominations happening in non-election years, or ethics and transparency rules. I’m not sure these are good ideas, but they’re not obviously bad ones, even though this person is obviously proposing them for bad reasons.