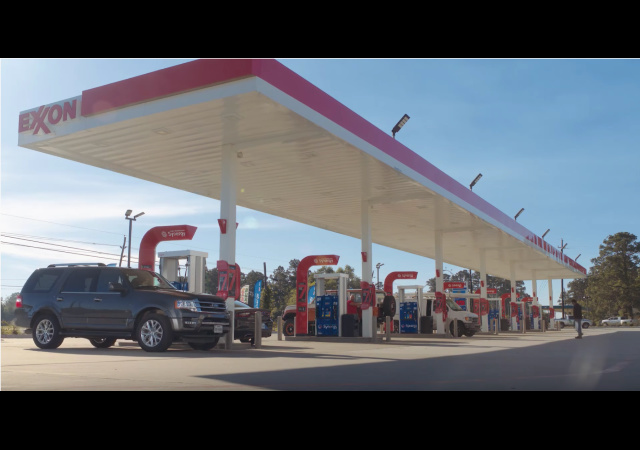 ExxonMobil has just won a crucial in the second climate change lawsuit to reach trial in the United States.

The decision was a blow for the New York Attorney General’s Office, which brought the case.

Justice Barry Ostrager of the New York State Supreme Court said that the attorney general failed to prove that the oil giant broke the law.

“Nothing in this opinion is intended to absolve ExxonMobil from responsibility for contributing to climate change through the emission of greenhouse gasses in the production of its fossil fuel products,” Ostranger wrote. But, he added, “this is a securities fraud case, not a climate change case.”

The case centered on how Exxon, the nation’s largest oil company, accounted for the potential cost of climate change in the future.

New York’s case accused the company of misrepresenting these costs, with James arguing that the company used one set of numbers publicly, while operating with a less conservative forecast internally.

When he took the stand on Oct. 30, former Exxon CEO Rex Tillerson said that the company tried to understand the impact of climate change and tried to accurately communicate this impact to shareholders. Exxon said the case was misleading and politically motivated and the result of a coordinated effort by anti-fossil fuel groups.

“Today’s ruling affirms the position ExxonMobil has held throughout the New York Attorney General’s baseless investigation,” Exxon spokesperson Casey Norton said in a statement. “We provided our investors with accurate information on the risks of climate change. The court agreed that the Attorney General failed to make a case, even with the extremely low threshold of the Martin Act in its favor,” he added, while noting that the company would continue to invest in technologies seeking to reduce emissions.

The case was dismissed “with prejudice,” which means that “this case cannot be tried again on these facts in New York.

This is good news for those employed in the country’s energy industry and the millions of Americans who own stock. It is anticipated that 2020 is going to be a YUGE year for oil production.

U.S. crude oil production is expected to rise 930,000 bpd to an average of 13.18 million barrels per day (bpd) next year, the U.S. Energy Information Administration (EIA) said on Tuesday, slightly below its previous growth forecast of 1 million bpd.

For 2019, output is expected to rise 1.26 million bpd to 12.25 million bpd, the EIA said, also slightly below its previous growth forecast of 1.3 million bpd.

U.S. shale output has boomed over the past decade, helping make the nation the world’s largest crude oil producer and a major exporter with an average of just under 3 million bpd so far this year.

The case was dismissed “with prejudice”…

In my non-lawyer experience, that is fairly rare, the judicial equivalent of “…and never darken my doorway with this c–p again.” Right?

(FYI: This is yet another reason why the Trump admin is so critical to the survival of the country. If the Greens can successfully sue anybody they want for their contribution to Global Climate Change, they will become the Holy Inquisition of the Church of the Burning Earth, and purge the climate heretics from corporate boardrooms while raking in billions of dollars to keep the whole sham going. It would wreck the economy.)

It is very difficult to prove what does not exist.

“Nothing in this opinion is intended to absolve ExxonMobil from responsibility for contributing to climate change through the emission of greenhouse gasses in the production of its fossil fuel products,” Ostranger wrote.
———-

I find it ridiculous that the judge had to proffer this feckless, needling and uncalled-for dicta swipe at Exxon, as a disclaimer to his opinion. As a signal to his Dhimmi-crat acquaintances that he’s still one of them.

The judge was worried that he’ll be persona non grata at Manhattan cocktail gatherings, as a result of this ruling.

I didn’t read it that way. As I read it, the judge was saying that Exxon was not on trial for causing global warming as the accusation was “securities fraud.”

Therefore even if it could be shown that Exxon was responsible for devastating global warming (and perhaps numerous other nefarious evils), this was simply irrelevant to the matter before the Court.

Clear expression and use of language are essential in crafting statutes, briefs and court opinions.

Notice how, in the quotation that I cited, the judge didn’t state (as he should have),that Exxon’s alleged culpability for “climate change” was totally irrelevant to the case. Instead, he proffered a statement with an unmistakable and intentionally quasi-apologetic/regretful tone, going out of his way to underscore and to reassure Dhimmi-crats that his opinion doesn’t “absolve” Exxon with regard to “climate change.” The language and intent are unmistakable and there is no other way to fairly construe them. The judge knew exactly what he was virtue-signaling, with this idiotic and inappropriate statement.

Also, I forgot to mention the most obvious point — the judge doesn’t even feign objectivity with respect to Exxon’s alleged culpability for “climate change,” in his statement, because he presents as an incontrovertible conclusion the notion that the company is indeed already properly deemed to be “culpable” in the matter, in his words.

I find that brazen and pat presumption, vis-a-vis a total non-issue with respect to the case at hand, to be incredibly arrogant and smacking of rank political/partisan overtones. It’s grossly inappropriate and improper.

Gee, that’s too bad (sarc). NY didn’t get to shake down a US company. Who will they target next?

Anyone who promotes the climate hoaxing BS and uses it to hurt – grift others needs to be banned from flying, have their car/truck/motor boat/motor cycle confiscated even the electric as they pollute too. Then all plastics removed from home, no electricity unless it is total solar that has no toxic components or hurt wild life (zero of that), and no electronics as they use rare earth. So leave them in hut/shack built from trash recycled and no candles as it would have to be shipped or wax stolen from bees.

Give them the life they want and have them live it. Leave the rest of us alone. Also if they are the type of climate grifter that blames the west but gives a pass to the real polluters of China, India, and etc. then let them get a special organic hand done traitor tattoo on forehead to celebrate it.

Losing this case will endear NY’s Attorney General Letitia James even more to her adoring base. She is a very good politician attempting to go places.

Since NY lost the case, does ExxonMobil get to stick NYS with their defense expenses?

No. That’s not (generally) how it works in the USA. If it were, we’d see fewer frivolous suits.

I feel so proud to live in a state where teachers are being laid off because of budget gaps but there’s plenty to spare for this garbage.

Come to think of it, the teachers would probably tell the kids that climate change is real and the oil companies are to blame. I guess it’s a wash no matter what!

I’m so happy to live in this state where there is plentiful natural resources which are vilified. Where the cost to consumers for natural gas and electricity rates are ranked as # 1 in the country. Where utility companies get the walking papers from the Gov. And not by the Public Utilities Commission representing my interests. I’m sure those living North of us in New England are just as happy. Oh yea..I’m real a real happy camper?

THIS is the reason behind Soros’ interest in running radical leftist for DAs nation wide. Power to vex.

This one is an outspoken radical and should come under censure for this debacle. Not for losing but for bringing it. Hell look at Cheese Boudin – another soros alumn and Bill Ayers git. Didn’t fall far from the tree.

Any relationship to radical Weatherman and Killer Kathy Boudin?

Her son. The father is still in prison. Junior was raised by Ayers and Dohrn, and as an adult proved to be a worthy heir to his terrorist parents and foster parents by going to work for Chavez in Venezuela. Now he’s SF’s DA. God help us all.

Clear expression and use of language are essential in crafting statutes, briefs and court opinions.

Notice how, in the quotation that I cited, the judge didn’t state (as he should have),that Exxon’s alleged culpability for “climate change” was totally irrelevant to the case. Instead, he proffered a statement with an unmistakable and intentionally quasi-apologetic/regretful tone, going out of his way to underscore and to reassure Dhimmi-crats that his opinion doesn’t “absolve” Exxon with regard to “climate change.” The language and intent are unmistakable and there is no other way to fairly construe them. The judge knew exactly what he was virtue-signaling, with this idiotic and inappropriate statement.