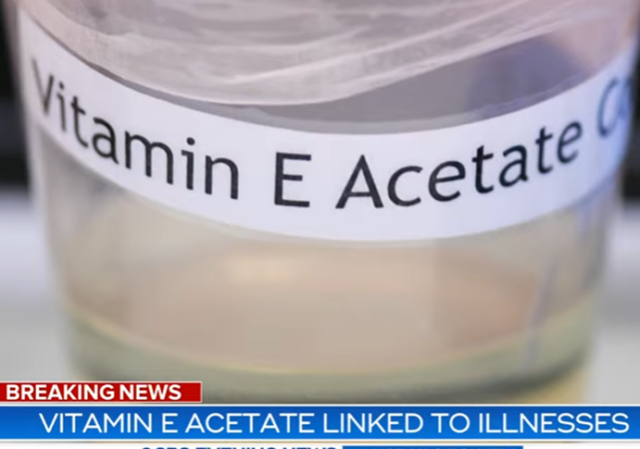 We recently covered the troubling incidents of illness, lung injury, and potential fatalities associated with vaping. Initial reports suggested that additives, such as Vitamin E Acetate, triggered immune system reactions and other symptoms that lead to serious medical problems.

Now the Centers for Disease Control and Prevention (CDC) has officially linked Vitamin E Acetate to the reported health problems.

U.S. health officials finally have a potential breakthrough in the vaping illness outbreak that’s killed at least 39 people, narrowing in on vitamin E acetate as a “potential toxin of concern,” Centers for Disease Control and Prevention officials said Friday.

The compound used in supplements, cosmetics and some vaping products was detected in all 29 lung tissue samples from patients health officials tested, Dr. Anne Schuchat, the CDC’s principal deputy director, told reporters on a conference call.

“We have a potential toxin of concern from biological samples in patients,” Schuchat said. “We are in a better place than we were a few weeks ago in terms of finding a culprit.”

Vitamin E Acetate is an oil that is often used quite safely in creams and cosmetic products. However, when it is heated and inhaled, it causes chemical burns to the sensitive tissues of the respiratory system.

Vitamin E acetate is one of the compounds used to dilute Tetrahydrocannabinol (THC) oil that is added to the vaping oil by black-market distributors. THC is the compound in marijuana that produces central nervous system effects.

Of 29 lung tissue samples from 10 states tested for the additive, all contained vitamin E acetate.

“These new findings are significant because for the first time, we have detected a potential toxin of concern – vitamin E acetate – in biologic samples from patients with lung injuries associated with the use of e-cigarette or vaping products,” Dr. Anne Schuchat of the CDC said.

She described it as a “breakthrough” that the additive was found “at the primary site of injury within the lung.”

The CDC reported that as of Tuesday, the outbreak had sickened 2,051 people and resulted in 39 confirmed deaths. Schuchat noted the “trend in cases appears to be downward, but some states are still being hard hit.”

President Donald Trump has just announced that he will be meeting with vaping industry representatives as his administration considers tightening e-cigarette regulations in the wake of the findings.

Trump did not give a time for the meeting or offer any other details. He said on Friday that his administration would come out with “an important position” on vaping this week.

Whatever is decided, the target should be the black market vaping producers and not the responsible producers of completely legal products.

Punishing legit e-cigarette manufacturers will only lead to more black market products, which will worsen an already bad situation.

Gee, if only there was some way not to inhale noxious vapors into one’s lungs. If only…

“Whatever is decided, the target should be the black market vaping producers and not the responsible producers of completely legal products.”

Coincidence does not infer causality. It is at best a potential cause which still needs to be proven. I suspect there are tens or hundreds of thousands who have used the same vaping products containing Vit-E acetate who have suffered no adverse effects above and beyond incomprehensible stupidity.

More than likely a toxic by-product in the manufacture process which has yet to be identified. This is especially true with meth that was made by a high-school dropout. The toxic byproducts are those who bear a structural similarity to the active agent which then allows them to interfere with normal receptor binding or mucks up the degradation process. The black market has never been known for quality control. We probably have another MPTP incident in the early stages.

I have a friend/acquaintance who is allergic to vitamin E and has to make her own lotions, can’t wear sunblock, etc. because it’s in everything for your skin and isn’t always included in the list of ingredients (or wasn’t, several years ago when we discussed it.)

If one in ten thousand people had a milder reaction to vitamin E, such that they could rub it on their skin but it was a health hazard when inhaled, there would still be a lot of people affected.

doesn’t make much sense. it’s used in many products, both topical and oral. i’d be curious to know if a tested wider group. i’d suspect that most would test positive.

This will likely turn out to be another attempt to scam the people.

2000 people suffered detrimental effects from vaping to need hospital attention. Now, the article does not say exactly how many lung tissue samples were actually tested, it only states that from 29 samples all had evidence of Vitamin E Acetate. So, it possible that these are the only samples out of 2000 which showed the presence of Vitamin E Acetate. If so, this is hardly conclusive evidence of anything other than these samples contain residue of the oil.

The 29 samples were taken from cadavers.

Lesson learned. Do not ban things.

Are there people who think that burning something, inhaling the smoke, then hold it in your lungs is anything close to a good idea? There may be some natural selection in play.

This just in: Key ingredient in adult beverages linked to liver damage, cancer, domestic violence, vehicular manslaughters, child abuse and a host of other illnesss. We need more advertising showing the fun and coolness of substance in order to make sure everyone knows it causes no harm. In the meantime VAPING!!!! OMG!!!!! YOU’RE GOING TO DIE!!!!!!!!!!!!!!!!!!!!!!!

In the old days Southern Comfort was known as “liquid panty remover.” I guess those advertising campaigns are a thing of the past. OTOH, I recently came across root beer that contained THC as a cunsumable. I guess the same person who came up with candy cigarettes is still working in marketing somewhere.

The only thing bad about telling others what to do is that someone will come along and tell YOU what to do. Good luck peoples.