Why are e-cigarettes now the target of panic-based regulation?

Why are e-cigarettes now the target of panic-based regulation? 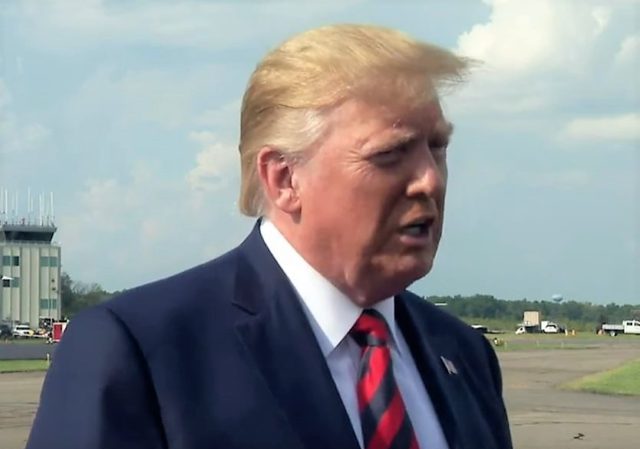 The Trump administration announced this week that it plans to ban the sale of most flavored e-cigarettes, after hundreds of people have been sickened by mysterious lung illnesses.

Sitting in the Oval Office with the government’s top health officials, President Trump acknowledged that there was a vaping problem and said: “We can’t allow people to get sick. And we can’t have our kids be so affected.”

Alex M. Azar II, the health and human services secretary, said that the Food and Drug Administration would outline a plan within the coming weeks for removing flavored e-cigarettes and nicotine pods from the market, excluding tobacco flavors. The ban would include mint and menthol, popular varieties that manufacturers have argued should not be considered flavors.

There is some social media speculation that it is connected to President Trump’s youngest son, Barron, and that the teen’s parents are worried about him “vaping”.

President Trump on Thursday said that he and first lady Melania have warned their teen son about the dangers of vaping.

Trump made the statement on the White House lawn before departing for Baltimore on Thursday evening when a reporter asked what they have told Barron.

Yes, there have been some very troubling medical cases that have apparently arisen from the use of e-cigarettes. For example, a Minnesota student was hospitalized with vaping-related lung injuries that left him on a ventilator, and American e-cigarette users have reportedly suffered from serious health effects related to their use of the product.

Elijah McClure, 21, of Brooklyn Park, has been on mechanical breathing apparatus for 11 days so far, after his nausea and sickness developed into lung failure.

…Sedric [McClure], who hasn’t heard his son’s voice in a week, described the damaged as ‘absolutely devastating’ and now wants to warn others about the potential harm of e-cigarettes.

He said: ‘The violent retching with the dry heaving and vomiting, the pain that he was going through really shook me to my core.

‘You go to text something and you just lose it because you’re typing and saying that he’s on a respirator.’

The family revealed their son started using e-cigarettes at the age of 15 and thought he had stopped after they verbally scolded him for it.

It was not clear whether he was using liquids that included just nicotine or THC [Tetrahydrocannabinol, the psychoactive constituent in marijuana] too they explained, after finding his lemonade flavored cartridges.

It is the last sentence in the above block that highlights the likely root cause of this report. Nicotine has serious effects on the central nervous system in high doses. On the other hand, there have been reports of severe, acute lung injury induced by vaping Cannabis Oil.

And that may be the true source of the recent scourge of “killer vape.” In fact, a police raid has recently exposed an illegal TCH vape cartridge empire run by two Wisconsin brothers.

Tyler Thomas Huffhines, 20, and Jacob David Huffhines, 23, were arrested last week in Kenosha County, Wisconsin after simultaneous raids on their home and a secret headquarters in a rented condo.

Cops discovered 31,200 vape cartridges filled with one gram of THC each and another 98,000 unfilled cartridges in the condo during the raid on September 5.

…Cops say that the brothers employed a team of under-the-table workers known as ‘juicers’ to fill cartridges on a crude assembly line, using syringes to inject the potent liquid TCH into each cartridge.

But they later discovered they could maximize profits by paying workers 30 cents per cartridge filled, according to Beth.

The filled cartridges were packaged in brightly colored boxes touting the names of fruit or candy flavors.

One can easily imagine what other additives might have been included to maximize illicit profits.

Then, there are the black market blends that contain a Vitamin E derivative, one that triggers an immune system reaction.

After testing products, New York has focused its investigation on vitamin E acetate, which recently has been used as a thickener, particularly in black market vape cartridges. Suppliers say it dilutes vape oils without making them look watery. Vitamin E is safe as a vitamin pill or to use on the skin, but inhaling oily vitamin E droplets into the lungs can trigger pneumonia.

Immune cells containing oily droplets have been found in the lungs of some patients. These large cells, called macrophages, are the clean-up crew of the immune system. University of Utah doctors think this could be a marker for vaping injury. They wrote up their findings about six patients in the New England Journal of Medicine.

The problem with the ban is that it will inspire further harmful black market blending. Perhaps the better approach would be education, ads, and a Reagan-style “Just Say No” campaign.

Except that’s not true.

read my statement below

Nothing like Trump making a controversial declaration to call attention to a problem. Everyone on both sides will try to fact check him.

No different than the “Opioid Crisis”. They go breathless over the dangers while conveniently leaving out the additives that are the likely cause of the illnesses.

The Opioid bit where they tote so many thousands dying leave out that most of the deaths are not from prescription drugs but the illegal drugs like heroin.

Sure, there are issues with both these things, but not to the extent that is pushed. It is a money grab. The government wants more money and so they are going after pharmaceutical companies in a shake down that would have Jackson and Sharpton look like upstanding guys. They will use this to collect millions from e-cigarette companies because their product is being used through the blackmarket to vape THC and use heavy nicotine doses that aren’t available through the legal channels.

Of course the problem isn’t also cannabis, which is part of all this in a potent dose, but that is because the shake down artists want to build that industry up to higher wealth levels before they step in to fleece them.

Attacking e-vaping is a distraction, and useful apparently.

As a person that smoked almost 3 packs a day for over 20 years, I tried everything to quit. Vaping gave me the ability to quit smoking and I vaped for just under 2 years to wean myself off nicotine completely.

Medical evidence bears you out. Unfortunately, far too many formerly reliable medical journals are now property of the left, and good data, sound research and reasonable conclusions (saying vaping is more effective than big-pharma’s Chantix and nicotine patches) just aren’t going to see the light of day. You are right, and countless ex-smokers will agree with you.

I know many success stories such as yours. This is insane

Took my son 3 months. Thank you that these ridiculously dangerous additives were not in market yet.

So because black market black alley mixes are contaminated, we need to ban the legitimate market?

Life was so much simpler in 1957 or it may have been 1958, when cranberries caused cancer. For about five months. Then, they didn’t.

I remember that – the Thanksgiving that wasn’t

I for one have complete confidence in the government which collects tens of millions of tax dollars from the tobacco industry when it comes to determining the immediate, toxic, terrible, horrid threat of vaping which garners the government no money at all.

On a more serious note, I suspect about 95% of this current panic is indeed caused by idiots putting CBD oil or Vit.E into the vaping fluid to get high. Grats, nitwits. You found something more dangerous than tobacco.

The vaping crap is just the newest something shiny to detract from real news.

The cases don’t involve older people who’ve been vaping for years and they’ve occurred relatively recently. They are the result of dumb young people who think they’re bullet-proof buying tainted carts and pods off the street. Studies done overseas have shown that vaping is a hell of a lot safer than smoking and Britain is actually urging people to ditch the cigarettes for the vape. Why? Because they have government funded healthcare and they recognize how much money they’re going to save down the line if they can get people off the cancer sticks.

At least one case was a 50 year old and there have been numerous cases, young and old, that haven’t resulted in death.

I do believe many of them are due to bad products. Your air sacs are actually a pretty delicate membrane and some people treat them like crap.

I really have no opinion about vaping, but I am adamantly against stupidity and manipulation of public opinion and this issue is nothing more than the latest case.
>
Sure, all or nearly all cases of people getting sick were related the use of black market THC vaping or something similar so, instead of cracking down on those who sell the THC products, the government goes after all manufacturers of vaping materials. Expect huge fines for vaping manufacturers son.
>
Likewise, the opioid epidemic became a huge issue because of all the overdoses that were killing people. These deaths were almost exclusively from illegal drug users using pills and other opioid products manufactured by pushers using illegal fentanyl (often smuggled in from China) so, instead of going after the illegal market, pill mill doctors, or pharmacies who break the law by dispensing ever increasing quantities illegally, the government goes after pain patients who have a very legitimate need for pain medications.
>
Then there is the issue of guns. Hundreds of millions of law abiding people own hundreds of millions of guns and they have yet to commit any crime. Time and again, it has been shown that the overwhelming number of gun homicides (excluding suicides) occur at the hands of criminals or mentally unstable people. Instead of going after the mentally unstable (other than the vague and Soviet Union sponsored idea of red flag laws where the government gets to define who is mentally unstable and is often done for political reasons) or the criminal, the government (largely Democrats) is targeting the law abiding gun owner who has done nothing wrong.
>
Even worse is global warming where a hypothesis has been given that CO2 increases in the atmosphere is going to destroy the Earth. Never mind how every model attempted overstates the warming by up to orders of magnitude, these models are still used to stir fear and paranoia in the public. Never mind how CO2 is a minor greenhouse and how water vapor (responsible for over 90% of the greenhouse effect) isn’t even modeled in any of these predictions. Never mind how few seem able to understand that the climate has changed far more dramatically than it has in the last century or that the Earth has been far warmer than it is today, the fear mongering must still continue.
>
The list goes on and on of the stupidity that we face in our media and the government. When will it ever stop? Likely never because the media and the government has become so adept at their misinformation campaigns that just about everyone now considers themselves an expert with strongly held opinions largely based on ignorance. In today;s world, the worst position to be in is the real, honest to goodness expert for they see the lies and yet they can get no one to listen to them for the public’s thinking programming is complete.