“…first of all, I was told “Who’s Jeffrey Epstein. No one knows who that is. This is a stupid story.” 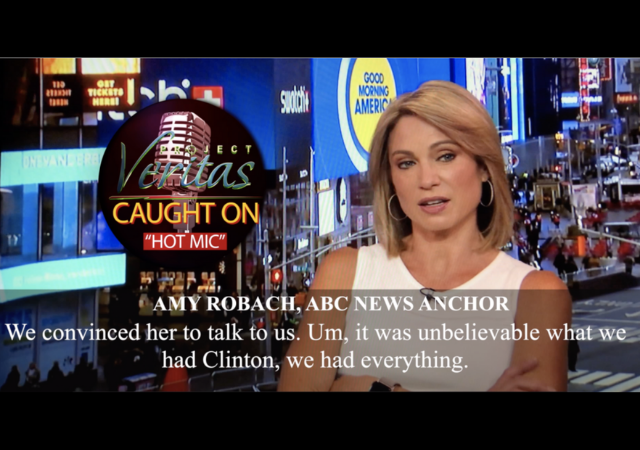 Tuesday, Project Veritas released a video showing what appears to be ABC News reporter Amy Robach, ‘Good Morning America’ Co-Host and Breaking News Anchor at ABC, discussing how the network had the Jeffrey Epstein story with extensive detail from one of his alleged victims, corroborated by other women, three years ago, but that the network ultimately killed the story.

PV obtained the footage from an off-camera producer.

Amy Robach, ‘Good Morning America’ Co-Host and Breaking News Anchor at ABC, explains how a witness came forward years ago with information pertaining to Epstein, but Disney-owned ABC News refused to air the material for years. Robach vents her anger in a “hot mic” moment with an off-camera producer, explaining that ABC quashed the story in it’s early stages. “I’ve had this interview with Virginia Roberts (Now Virginia Guiffre) [alleged Epstein victim]. We would not put it on the air. Um, first of all, I was told “Who’s Jeffrey Epstein. No one knows who that is. This is a stupid story.”

She continues, “The Palace found out that we had her whole allegations about Prince Andrew and threatened us a million different ways.”

Robach goes on to express she believes that Epstein was killed in prison saying, “So do I think he was killed? 100% Yes, I do…He made his whole living blackmailing people… Yup, there were a lot of men in those planes. A lot of men who visited that Island, a lot of powerful men who came into that apartment.”

Robach repeats a prophetic statement purportedly made by Attorney Brad Edwards “…[T]here will come a day when we will realize Jeffrey Epstein was the most prolific pedophile this country has ever known,” and Disgustedly Robach states “I had it all three years ago.”

Both ABC and Robach responded to the publication of the video.

“At the time, not all of our reporting met our standards to air, but we have never stopped investigating the story. Ever since we’ve had a team on this investigation and substantial resources dedicated to it. That work has led to a two-hour documentary and 6-part podcast that will air in the new year.” – ABC News

“As a journalist, as the Epstein story continued to unfold last summer, I was caught in a private moment of frustration. I was upset that an important interview I had conducted with Virginia Roberts didn’t air because we could not obtain sufficient corroborating evidence to meet ABC’s editorial standards about her allegations. My comments about Prince Andrew and her allegation that she had seen Bill Clinton on Epstein’s private island were in reference to what Virginia Roberts said in that interview in 2015. I was referencing her allegations – not what ABC News had verified through our reporting. The interview itself, while I was disappointed it didn’t air, didn’t meet our standards. In the years since no one ever told me or the team to stop reporting on Jeffrey Epstein, and we have continued to aggressively pursue this important story.” – Amy Robach

For ABC, CNN and the rest of the media, censoring real news that hurts their cause is every bit an important as reporting fake news that supports it.

Did the law require ABC and its employees to report to the police their suspicions of child abuse? It’s time for a criminal investigation.

notamemberofanyorganizedpolicital in reply to nebel. | November 5, 2019 at 2:49 pm

In every case such as this we must Press the Question of:

How many employees were using Epstein’s services and island!?

venril in reply to notamemberofanyorganizedpolicital. | November 6, 2019 at 9:22 am

Perhaps the person who killed the story was a ‘FoJ’. (Friend of Jeffery)

notamemberofanyorganizedpolicital in reply to venril. | November 9, 2019 at 12:20 pm

Which, while certainly newsworthy, pales in comparison to Epstein’s empire of sexual abuse that possibly enabled some of the world’s most powerful men to exploit vulnerable youth.

I believe the far bigger story is the other side of Epstein’s business.

Documenting his guests antics then blackmailing them. Who did he blackmail? And what did he demand? Cash? Favorable votes? Who has the videos and blackmails lists today and what how are they using them?

Did the CIA seize the info and take up the reins to use as they see fit? To blackmail info, votes, behavior?

Who was Epstein’s handler/boss? Because this was SOP for the KGB back in the day. Because he had to have some serious muscle behind him for protection.

This isn’t over. Not by a mile.

notamemberofanyorganizedpolicital in reply to venril. | November 9, 2019 at 12:32 pm

Imo the CIA set him up in that business.

No one has ever been able to explain how Jerry suddenly sprang from being a plain, undistinguished nobody to a multi-millionaire overnight.

Besides, it’s been known for decades that the CIA has been running everything illegal to entrap and blackmail people into doing what they dictate.

Confessions of a D.C. Madam: The Politics of Sex, Lies, and Blackmail – by Henry W. Vinson

A firsthand account of how public officials and other well-connected individuals have been compromised or blackmailed by their sexual improprieties, Confessions of a D.C. Madame relates the author’s time running the largest gay escort service in Washington, DC, and his interactions with VIPs from government, business, and the media who solicited the escorts he employed. The book details the federal government’s pernicious campaign waged against the author to ensure his silence and how he withstood relentless, fabricated attacks by the government, which included incarceration rooted in trumped up charges and outright lies. This fascinating and shocking facet of government malfeasance reveals the integral role blackmail plays in American politics and the unbelievable lengths the government perpetrates to silence those in the know.

BS to continuing to work on the story.

Agreed. The story was squashed so there was no justification to keep going on it. Sounds like guilt. It’s also BS about the interview not meeting their standards. It put Bubba in a bad place and that wasn’t going to be allowed. Hillary was to be president so they wouldn’t allow a story against their dawg come out and possibly hurt Hillary.

Did ABC ever report on Trump’s alleged Russia-gate? So much for editorial standards needing proof before airing the piece.

notamemberofanyorganizedpolicital in reply to Petrushka. | November 5, 2019 at 6:09 pm

But ABC has a great mushroom farm…

Didn’t meet their editorial standards — but Avenatti’s Julie Swetnick did?

Jim Treacher –” Modern journalism is all about deciding which facts the public shouldn’t know because they might reflect badly on Democrats.”

When the story fits the “narrative” that the nedia are trying to push, for example anything negative about the President or the smears of the Covington boys and Justice Kavanaugh, they don’t seem hesitant or insistent on any corroboration. I would like to know whether Amy Robach was ordered, under threat of being fired or being sued by the network for defamation, to produce a benign explanation.

I was thinking the same thing about Covington Catholic. How can the media justify some teenage boys possibly being rude to a 65 year old man as a lead national news story? Every day teenage boys assault or kill seniors and there isn’t any mention on national news.

Anonymous sources are automatically corroborated. It’s the real ones you have to be careful about.

The world just gets harder for never-Trump folks. I will shed a single manly tear for the media.

Oh, I’m sure the networks are working on it. Smothering these things is a full-time job.

Now, if Robanch really wanted to air the story, and she was slick about it, she’d have put something bogus in there about DJT being a frequent guest. Then the network would have boosted it rather than smothering it. And all she’d have to do is delete the imaginary Trump involvement at the last moment. Of course just after that she’d probably be unemployed or found floating in the river, but hey, no plan is perfect.

It seems that pedophilia (i.e. trans-social orientation) is a threshold that few will cross.

That said, a consensus has been revealed that assures and enables people to leave the Twilight Fringe including: Chamber, Pro-Choice quasi-religion or “ethics”, and progressive liberalism (i.e. monotonic divergence).

As for the Fourth Estate and journolism:

On the one hand I respect the palpable anger she expressed in this hot mic recording but, on the other, I have to wonder why she didn’t resign from ABC and blow the lid off the case somewhere else if she truly believed that Epstein was the most prolific pedophile in American history and further that he enabled some of the world’s most powerful men to engage in it as well.

It seems she is more angry as missing a big “scoop” rather than at the opportunity to stop Epstein’s actions and expose his sordid ring of perverts.

That was my first thought.
She didn’t get the Pulitzer.
Lamentable, that is how she came across.

Yes, that is her only anger. That she missed the credit due for the story.

That’s not correct. She didn’t like it that the spiked the story.

I’m a former professional journalist, from when that meant something. I watched the clip, and am convinced that her frustration was genuine and legitimate.

She describes making a major, time-consuming effort to cultivate a great source. She and her assistants actually get the damn story on the record. And then it’s spiked.

I’ve been there. Nothing nearly as important as what she found, but I’ve been there. Frankly, I think her demeanor and words were restrained given the magnitude of ABC’s malpractice.

To denigrate her for her frustration at losing the scoop is ridiculous. That is, always has been, and always will be a driving force in actual journalism. Really, children, what in hell is wrong with a reporter wanting to get the scoop, as long as it’s accurate and fairly reported? These are human beings, not machines. The thrill of the chase is part of the game. Ask any cop, fire fighter … or real reporter.

Why didn’t she quit and go elsewhere? Maybe because a) She wants to keep her cushy job, and b) She has this strange desire to stay alive. People are so funny that way. LOL

LA Times buried the video of Obama giving the keynote speech for a Terrorist. Still haven’t released it. They had it during the campaign in ’08.

Hillary and Huma are both listed on the flight logs of at least one of Epstein’s flights to his pedophile rape island.

This story would have obliterated Hillary’s campaign if our corrupt media had given it the Billy Bush treatment.

This, this is deliberate election interference.

They have no business making any pretense of being a news agency. They function entirely as if they were a PR firm working for the DNC.

The big part is being ignored.

Who was being blackmailed and for what? Was is it for money? For votes? Where are the files and videos and blackmail ledgers now? Who is using them for what? This would be a treasure trove for a modern day J Edgar Hoover. Money, votes, legislation?

And who was Epstein’s boss/handler?

notamemberofanyorganizedpolicital in reply to venril. | November 9, 2019 at 12:34 pm

To be known as “The Zucker Effect”…

“We didn’t kill the story. It committed suicide.”