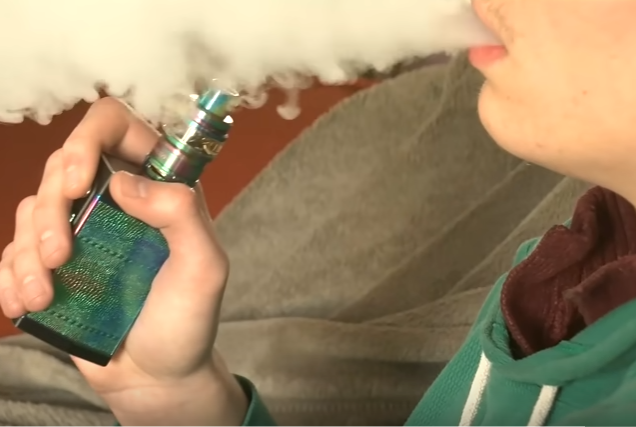 This event focused on addressing the concerns over minors using flavored e-cigarettes as well as ending the spate of serious illnesses tied to additives in vaping products.

As many Legal Insurrection readers noted, any ban would simply help the black market for these products.

“If you don’t give it to them, it is going to come here illegally,” Trump said during a meeting with vaping industry leaders according to the Washington Post.

“They could be selling something on a street corner that could be horrible. They are going to have a flavor that is poison.”

Trump indicated that history and federalism were factors that will be considered in any recommendations his administration would offer in regards to this matter.

In Friday’s meeting, Trump inquired about a state-based approach to laws and questioned whether a national flavor ban would be reminiscent of alcohol prohibition in the 1920s.
“When you watch Prohibition, when you look at the alcohol, you look at cigarettes, you look at it all, if you don’t give it to them, it’s going to come here illegally,” Trump said. “That’s the one problem I can’t seem to forget.

However, plans to raise the legal age of use are still on track.

…Trump indicated support for legislation to raise the federal minimum age for buying tobacco products to 21 from 18, which is pending in Congress.

While health groups generally support an age increase, they say “Tobacco 21,” as it is called, is not enough to check the increase in teen vaping.

Reports indicate that the roundtable addressing the health risks of vaping between industry representatives and public health advocates was contentious.

Utah Senator Mitt Romney was at the center of several of the most heated exchanges.

Sen. Mitt Romney, R-Utah, clashed multiple times with vaping advocates, complaining that half the students in his state’s high schools are vaping.

“How about the children? We’ve got almost 6 million kids addicted to nicotine and they’re getting addicted to nicotine because of flavors,” Romney said. He said minors think vaping is “just a candy type product. It’s the flavor that’s drawing the kids in, it’s a health emergency. … It’s killing our kids.”

“Most adults are not using flavors,” he said. “Yes, they do,” advocates shot back.

Of course, Trump follows Romney’s suggestions at his own peril.

If Mitt has any say on vaping, i’m voting for Bernie https://t.co/niSRwIuulC

Milktoast Mitch caved on gay marriage like a hollow egg, but now he’s got his knickers in a twist over vaping flavors?

You cannot look at the rising numbers of vaping without looking at the numbers for smoking over the same time period. (Well, you can, but it loses a lot of real context)

Meant to upvote, sorry for the downvote.

I teach at a small rural school where pretty much all of the young boys dip. Vaping has really cut down on that. The girls usually didn’t use a tobacco product, but around half of them now vape. We see a spike in using a vape in 8th and 9th grade, but the juniors and seniors have pretty much stopped vaping. Raising the age won’t matter for us because the source for the vape/juice is almost always the parent.

Just an anecdote from one small school; I don’t know how generalizable it is.

http://freakonomics.com/podcast/vaping-nicotine/ gives excellent background on the problem and why banning – including Juul’s virtue signal, may make things worse.

Ex Smoker “vapers” prefer the flavors to the cigarette emulations. But Juul removed the flavors, so the vapes now remind them of cigarettes.

The deaths and injuries were from witches brew unauthorized potions that others made mainly for THC (Marijuana) which is only fat-soluable so vitamin E acetate was added and blocked the lungs. No manufacturer provides these.

Senator Delecto is a Mormon Carrie Nation that just wants prohibition and to be a spoilsport.

Is this what Romney demanded in return for holding the line on Impeachment?

If so, I assume the deal was just for these photo ops and not for an actual policy change.

Yes, the adults buy the flavors, too (I know, because I sell the stuff). No one holds back from indulgence these days. People think they have a right to happiness, and that it’s just one bite, taste, or flavor away. And there is no dignity that can not be sacrificed for momentary pleasure. Look at the drunks falling down on the street and the fully-grown, adult women who dye their hair pink.

And then there’s Pierre Delecto, the man with no dignity at all.

What’s wrong with this picture? Why in God’s holy earth is Romney, asshat par excellence, sitting next to DJT?

Is this an example of Trump’s four-dimensional chess? Or does it indicate he has no principles whatsoever?

Mittens has put himself into an old category I used to use, back when Fatso Ted Kennedy was alive: my position on any issue was the opposite of the one taken by Ted.

As to vaping itself, I don’t care. Seems to me it’s a dumb idea, but I’ve read enough testimony from former smokers to accept the fact that it operates as designed, it helps smokers stop smoking. Yes, kids do it.

But, like Trump says, outlaw vaping and you will only create a new class of drug dealing billionaires.

If Mittens is in favor of something, there must be an angle and President Trump should dismiss it out of hand just for the sake of karma…

Research is indicating that vaping leads to as many lung issues as cigarettes. What we need to do is educate people appropriately.