“…despite the fact that I pay millions of dollars in city, state and local taxes each year, I have been treated very badly by the political leaders of both the city and state.” 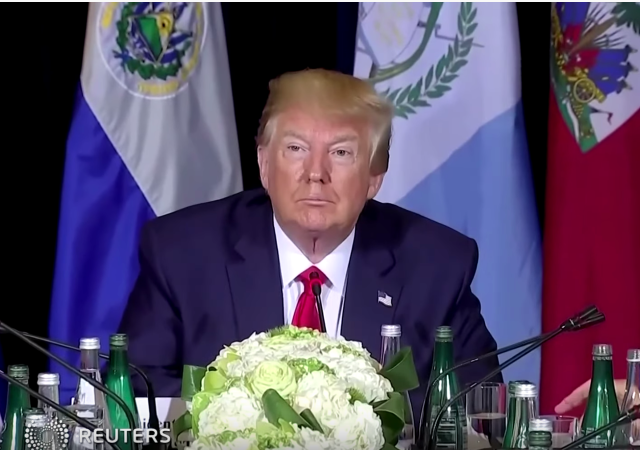 President Donald Trump announced this morning that he and his family will officially leave New York once his presidency comes to an end.

Due to the bad treatment he’s received from New York, the Trump family will make Palm Beach, FL, their permanent home. His Mar-a-Lago Club is located in that city.

1600 Pennsylvania Avenue, the White House, is the place I have come to love and will stay for, hopefully, another 5 years as we MAKE AMERICA GREAT AGAIN, but my family and I will be making Palm Beach, Florida, our Permanent Residence. I cherish New York, and the people of…..

….New York, and always will, but unfortunately, despite the fact that I pay millions of dollars in city, state and local taxes each year, I have been treated very badly by the political leaders of both the city and state. Few have been treated worse. I hated having to make….

….this decision, but in the end it will be best for all concerned. As President, I will always be there to help New York and the great people of New York. It will always have a special place in my heart!

Trump and his wife Melania made it official in September.

Many people leave New York due to taxes, laws, and regulations. It reminds me of why people leave Illinois. Not only will it save Trump money, but also his family. New York’s estate tax rate tops out at “16 percent for estates larger than $10.1 million.”

In an article in the Florida Bar Journal in January 2019, three lawyers with Proskauer Rose wrote about the recent wave of people moving from New York to Florida in “large part” because of the repeal of the state and local tax deduction that was a byproduct of the tax bill that Mr. Trump signed into law in 2017.

“While it may be easy enough for an individual to buy a home in Florida and move, the act of physically moving to Florida is only part of the battle,” the three wrote.

“The real challenge is proving by clear and convincing evidence that the individual is no longer a New York domiciliary and does not qualify as a New York statutory resident for New York State income tax purposes,” they said.

David Pratt, a partner at Proskauer Rose and one of the authors of the Florida Bar Journal piece, said Mr. Trump had probably changed his primary residence for the same reason other people have left New York.

“What he’s doing is not any different than what a lot of individuals from New York are doing, and they’re becoming Florida residents,” Mr. Pratt said.

Palm Springs? Can Trump see the wall from there? 😉

Electronically, yes. Optically, it depends on the vantage point.

The sitting governor of NY actually said that? What a low-life. Trump has been the hand that has been feeding them and is tired of continuously getting bitten. Time he moved on. He will never win NY in 2020. With FL a swing-state, maybe this can lock-in their electoral votes.

And the Governor somehow has reviewed private tax returns, and publicly comments on them? All the worse because it is untrue.

Don Jr. tweeted back to Cuomo that he can remember being in The Donalds office when Andrew was up there begging for campaign funds

Of course Cuomo has reviewed tax returns of his political enemies. Under no circumstances do laws restrict the actions of Democrats.

Re: “I have been treated very badly by the political leaders of both the city and state”

I’m sure you have … I don’t doubt it for a second.

OTOH you reap what you sow. You came out of the gate acting like an AH and you’re still acting like an AH. Little surprise you’re “treated very badly”. You could have been a pretty good president … but you threw it away with your big mouth.

His “big mouth” got him elected. It has caused the Lefty establishment to reveal themselves. His BM will get him re-elected.

I’m just trying to decide whether the original poster is the Ghost of Rags or David French.

Such boorish behavior! Where’s Mitt Romney when you really need him? He knows how to lose with style.

This isn’t true. I noticed this, and started commenting on it, during the primary for 2016. There would be some kerfluffel over something DJT said that was absolutely outragious, and I would go to the source material, usually a video, and find out that, no, he did not say that.

It happened over and over.

DJT is far more gently spoken than most prominent Democrats. If somebody hits him, however, he will hit back. Given the way he has been treated, I have no problem with it. You probably would not, either, if you weren’t putting your faith in liars.

Trump has been what I said he would be, the most effective conservative president since Eisenhower.

That’s why they hate him so much – he actually accomplishes what he set out to accomplish.

said Mr. Trump had probably changed his primary residence for the same reason other people have left New York.

Wow, NY must be harassing a lot of people about their tax records.

Not that it bothers me any . . . I have nothing whatever to do with New York, and my taxes are very uninteresting. Win-win!

Rush was describing how they harass ex-pats like him today. Tax audits are just part of it. I literally have no idea how they get away with it for people who never do business in the state or city.

They do that in CT too. They even make you prove where you go to church. Of course our Democratic lawmakers hate people who go to churches but if you don’t go to church in Florida, they come after you.

They check how many days you spent at least a part of in NY. If you were here more than the allowed number of days, you’re subject to NY taxes no matter where you live. Even a one-hour visit counts as a day spent here.

PODKen, how you get treated in New York shouldn’t be a function of what you say or how you behave. Unfortunately we frequently apply our laws here based on which party you contribute to and who your friends are. The taxes are high here, the laws are almost as leftist as California, and our politicians think their job is picking the winners and losers. It’s amazing that he stayed in New York as long as he did.

Throughout my life in Florida a great many New Yorkers have moved to this state. Most of them come here believing that we should bow down to them because they came from NY. so you might think that I would be adverse to another one moving in.

I’ll trade all the displaced D’m Yankeys for Trump and his family any day. At least they are good for bussiness. And, the better the bussiness the better the revinue stream.

Rush said he was paying $10M in NY taxes a year when he announced he had had enough and moved to Florida. Even sold his properties in NY so they could not tie him to the city (nevertheless they attempted to audit him every year after he left for half a decade). The governor then also said “good riddance”.
…
Makes one wonder about these Democrats.

“New York state tax revenues fell by $3.7 billion, or 4.7 percent, last year — the largest collapse since the 9/11 attacks — but officials downplayed the significance.

Trying to find a bright side, state Comptroller Thomas DiNapoli said things could have been worse since a surge in collections last month staved off an even steeper drop.

“After months of concern over lower-than-expected tax collections, the state ended the fiscal year on a positive note,” he said.

“The sharp revenue declines in December and January, however, remind us to take nothing for granted. With expectations of a slowing economy and ongoing concerns regarding federal fiscal policies, a strong commitment to building robust reserves in preparation for the next economic slump is essential.”

The primarily culprit was a 6.6 percent decrease in personal income tax revenues, which came in at $48.1 billion — $3.4 billion less than the previous year.”

….
So trump just made your ‘brighter’ by leaving. A win-win.

By moving to Florida, maybe DJT is trying to stay ahead of the insects. The State Bird of New York is the bedbug—I’d want to skip out too. Hey, some things you can fight; others, well, not so much.

There is a little irony in the fact that Trump, who is a true son of New York, is treated so badly yet they constantly kiss the a** of the carpetbaggers…