Sanders also said that he cannot think of anyone “who has had more of an impact on American politics as a freshman member of Congress than she has.” 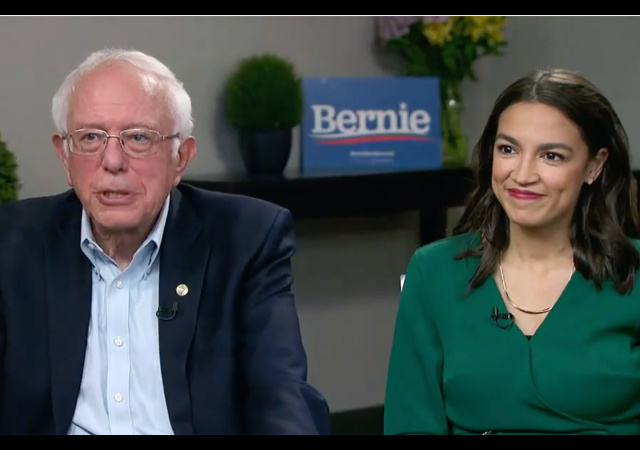 He apparently adores her so much that he wants her in his White House.

With an eye on 2020, Sanders pledged that his partnership with Ocasio-Cortez would continue should he win the presidency.

“If I am in the White House,” Sanders added, “she will play a very, very important role, no question, in one way or the other.”

Sanders was asked what type of role.

Sanders also said that he cannot think of anyone “who in the course of less than one year — she’s been in office less than one year, who has had more of an impact on American politics as a freshman member of Congress than she has.”

He described her as “a leader in the United States Congress” while claiming “[H]er ideas are resonating all over the country.”

Ocasio-Cortez joined Sanders on the campaign trail in Iowa after she endorsed him over Sen. Elizabeth Warren:

Ocasio-Cortez met with Sen. Elizabeth Warren before she ultimately decided to endorse Sanders. The New York congresswoman said Sanders’ Medicare for all plan and decades-long progressive record are what swayed her.

“It’s about a personal story and a personal history, and I think his history and commitment is unique,” Ocasio-Cortez added. “I think we’re so used to electoral cycles about being the lesser of two evils that we are not used to selecting the best of great options.”

hope ole’ bernie is getting his payoff from aoc now, because there is zero chance he’ll get the job.

The white house will need a bartender, right?

A barmaid who googling “how to mix a drink that makes the old phrt have a heart attack?” and then “What’s Bernie Sanders’ favorite drink. Asking fer a friend.”
Followed about two hours later by “how to erase search history? It’s, like, real urgent!!”

Where do these people come from?!?

Last night Tucker Carlson had a professor on, an immigrant person of color, who’s name, school and title of the book he wrote escapes me at the moment. The professor wasn’t at all complimentary about the US colleges and universities. Lincoln’s quote about seeing what your government will look like in a couple of generations by looking at students today came up and Carlson asked the professor what his take on that is. He responded that based on what he sees in colleges and universities today, in a couple of generations he believes the US will be a nation with a totalitarian Socialist government. He strongly suggests parents not look just at their children’s grades, but what they are actually being taught.

notamemberofanyorganizedpolicital in reply to The Friendly Grizzly. | November 13, 2019 at 9:02 pm

Upper Uranus or our schools…….

“His White House” ???
She will be the official Unicorn Trainer, right?

I wouldn’t let her work in my green house.

Every court needs a jester

Pretty pathetic that he’s even getting more than .01% of the vote.
Shows us how far we’ve fallen in the education of the kids.
Might as well just shut the Dept. Of ?Education? down now and save us some money.

The propagandizing and dumbing down precedes the dept of Ed.

Bernie’s crew was signing people up to vote in front of a Walmart today. So I talked to a couple of people working there. I said that there is no difference between Communism and Democratic Socialism and they disagreed. I said that Bernie really is a communist as he spent his honeymoon in Soviet Union and vacationed in Cuba and they gave up talking to me.

notamemberofanyorganizedpolicital in reply to rochf. | November 13, 2019 at 9:07 pm

Well that’s another good reason not to vote for that old fool.

Is one of Bernie’s three houses white? He’s certainly never going to live in the Whitehouse.

Meet the new Monica, same as the old Monica.

Does she already have a blue dress?

Do we have an ambassador in Greenland?

No, because it isn’t a country. Right now there’s not even a US consul there, but Trump is planning to appoint one next year.

I was thinking more along the lines of sending her and her “green” new deal there to give it a shot … tell her she can come back when Greenland is green.

Greenland turning green again would be proof of “global warmening”. It was green before the Little Ice Age; that it isn’t green again means we haven’t yet quite recovered from that.

I hope Bernie gets the nod. Trump will ruin him in the debates and win with 66%. AOC will be lucky to regain her old job at Starbucks.

His faith in her shows very poor judgment. What would happen if he actually had to decide something important?

Guess he has to pander more to those who love to follow, but know not where.

You can’t take her to the White House, Bernie. Her village wants its idiot back.

The only reason Cortez has any notoriety at all, much less any ability to look like she’s a leading Socialist-Democrat, is the MSM giving her the full treatment. She is very savvy regarding the media and they are more than happy to promote her at every opportunity. Beyond that ability to work with the MSM, she had street smarts and is otherwise an ill educated youth who put in time in the Ivy League and is thus destined to lead the nation for she is part of the “in crowd” by virtue of that Ivy League time. If voters in The Bronx and Queens (IIRC) are smart they will dump her a$$ next year for another Democrat in the Primary (it is highly unlikely any Republican would win that seat in this, or any other, millennia).

he is like every football player who decided to run before completing the catch. She has end-zone fever but has failed to realize that she is not bringing anything of value, other than her purty smile.

On an objective basis, AOC is an attractive woman. This, BTW, is why I appreciate conservative women as opposed to liberal women.

Conservative women understand that when I talk about ONE person I’m not talking about ALL persons in whatever group leftist people lump them into on pain of persecution if they object.

So for instance if I say this Muslim is a terrorist I’m not saying all Muslims are terrorists.

I once accidentally dated a feminist. I knew her from high school in Kali. We ran into each other on the East Coast. I asked her to dinner. And because she was in Washington D.C. and I was living in Virginia Beach she invited me to stay over.

That’s all it was supposed to be. I drive up to D.C., I take her to dinner, she lets me sleep in the living room.

I didn’t understand she had designs on me. Most women don’t. Some of you may have picked up on the fact I’m not a really great prize myself. But this woman was a disaster. A disaster in the level of AOC.

I don’t believe I can recall just how bad it was because I’ve blocked that part of my memory out. But maybe the guys will understand. After dinner she slips into a teddy and walks into the living room. She actually didn’t look bad in the lingerie. She also didn’t want me sleeping on the couch. But, who knew? I have standards. I had learned what was going on in her mind. No way, not ever.

She now thinks I’m gay because I didn’t go for it. Not all women, that one woman.

I don’t know what is wrong with the people of New York. AOC should be working as a stripper. I wouldn’t trust her to open a bottle of beer let alone mix a concoction I’m going to put in my body. And if she keeps her mouth shut she can probably make good tips. But now she’s in Congress.

So, Bernie is building himself a small house in VT, painting it white, and AOC is going to do what? Be his maid?

Thanks for the free material for a GOP campaign commercial, Bernie. If you win the nomination, that is… which you won’t.

Seriously, do any of these Democrats have a plan beyond “win the primary by going as far left as possible?” Does Bernie think this sort of thing is going to win him votes from people who aren’t outright socialists?

The new First Lady, no doubt. Jane O’Meara Sanders is in for a rude awakening. Heh!

I take it there are now even many, many, many more people asking Hillary to consider running.

2 socialists walk into a bar.
one screams for free drinks the other steals the tip jar.
sadly this is not a joke….

Back to first principles: Follow the money. Bernie makes a nice living out of running for President. Having vacuumed up the youth/radical vote makes him more valuable when it’s time to sell out and endorse someone who thinks they’re viable. He also serves a purpose for the party by giving the AOC supporters a place to go, allowing Warren and Biden et al to ignore them in public. Mainstream candidates prefer not to have to denounce the radicals or embrace them. I do note that Warren wasn’t bright to recognize that early on, and pandered to them, apparently hoping not to have to pay Bernie for them. This was a rookie mistake which will cost her plenty in the main. That whole nationalized healthcare thing was probably never supposed to survive beyond a couple early campaign appearances and thus there was no need for figuring out how it would work… but someone hung it on her and now she has to wear it.

In the normal cycle of life Warren would fade away by February for her sin of having gone too far left and then trying to return to the center, but Hunter Biden has made all things possible for her.

Bring AOC into his “Whitehouse” makes sense. If she is nearby, Bernie is no longer the village idiot. That is an important assignment that few people can fulfill.