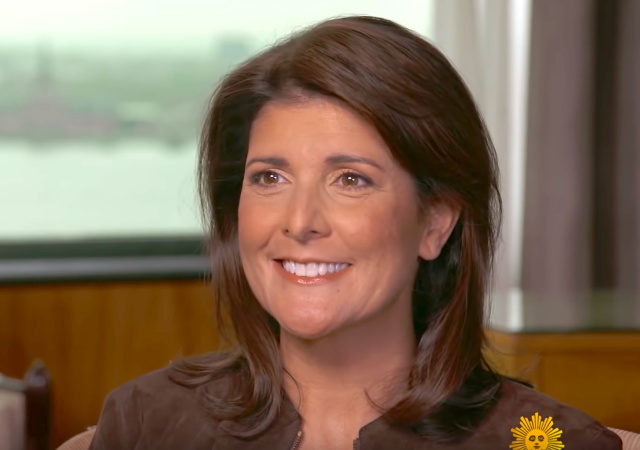 Haley said on CBS This Morning:

Haley recounts a closed-door encounter with then-White House Chief of Staff John Kelly and then-Secretary of State Rex Tillerson: “Kelly and Tillerson confided in me that when they resisted the president, they weren’t being insubordinate, they were trying to save the country … Tillerson went on to tell me the reason he resisted the president’s decisions was because, if he didn’t, people would die. This was how high the stakes were, he and Kelly told me. We are doing the best we can do to save the country, they said. We need you to work with us and help us do it. This went on for over an hour.”

O’Donnell asked, “You memorialized that conversation? It definitely happened?”

“It absolutely happened,” said Haley. “And instead of saying that to me, they should’ve been saying that to the president, not asking me to join them on their sidebar plan. It should’ve been, ‘Go tell the president what your differences are, and quit if you don’t like what he’s doing.’ But to undermine a president is really a very dangerous thing. And it goes against the Constitution, and it goes against what the American people want. And it was offensive.”

Haley wrote about the events in her new memoir, With All Due Respect.

Haley described “Tillerson as ‘exhausting’ and imperious and Kelly as suspicious of her access to Trump.”

The men told Haley that “their decisions, not the president’s, that were in the best interests of America” since Trump “didn’t know what he was doing.”

Tillerson did not respond to questions. Kelly said: “If by resistance and stalling she means putting a staff process in place … to ensure the (president) knew all the pros and cons of what policy decision he might be contemplating so he could make an informed decision, then guilty as charged.”

Haley replied, “No. On what? You’re gonna impeach a president for asking for a favor that didn’t happen and giving money and it wasn’t withheld? I don’t know what you would impeach him on. And look, Norah, impeachment is, like, the death penalty for a public official. When you look at the transcript, there’s nothing in that transcript that warrants the death penalty for the president.”

“To be clear, it was not a complete transcript. There are still things that are missing from it. And in it, he does say, ‘I would like you to do us a favor, though.'”

“The Ukrainians never did the investigation. And the president released the funds. I mean, when you look at those, there’s just nothing impeachable there. And more than that, I think the biggest thing that bothers me is the American people should decide this. Why do we have a bunch of people in Congress making that decision?”

Haley is correct. The media and the left try to twist the phone call, but the transcript clearly shows no “quid pro quo.” Ukrainian President Volodymyr Zelensky has said numerous times Trump never applied pressure or threatened him.

Haley is a snake. She will say/do anything for power.

In this case I believe it is the truth however. Kelly and Tillerson were both bad choices and were attempting to undermine the elected leader of the United States.

notamemberofanyorganizedpolicital in reply to Barry. | November 11, 2019 at 5:20 pm

Enough of the Haley pushing already.

So why didn’t she go to the President and warn him?

Seems to me that she realized she didn’t want to be part of the cabal because if it leaked into public knowledge of her being part of the cabal it could damage any future plans to run for president BUT she wouldn’t have minded it if they succeeded.

Exactly. Why wasn’t this asked in the interview? If she found it so offensive and believed it was unconstitutional, I would think she was obligated to do so. She took the oath to “support and defend” the constitution.

In defense of her choice, she was only an Ambassador to the UN, with no real power, going up against the Chief of Staff and Sec. of State, who DID have real power. Kelly especially is well known for destroying anyone who opposes him; he was the one who completely destroyed EPA chief Scott Pruitt’s career because Pruitt wasn’t “deferential enough” to him. (that got blamed on Democrats, but Kelly leaked all the material to the NYT to take Pruitt down, because he hated him)

If Haley would have gone to Trump, Trump, who still trusted Kelly at the time would have turned it over to him, and Kelly would have had her disgraced and fired on the spot.

and now to amend my own remarks – turns out that Nikki says she *did* Tell Trump all about it. I wonder if that was part of what led to Tillerson getting the early boot.

As far as I know Haley resigned on her own terms, she was not forced out*.

Tillerson and Kelly were fired. So, perhaps she did report it.

*or Pompeo decided she was not the right person after the dustup that occurred and it was agreed she should leave.

About 25 years ago I warned the president of a company I worked for that a recently hired VP was maneuvering to take his job (was also a VP). I left the company to pursue a new business not long after that.

Over twenty years later, that president called me to help him evaluate a business investment. The issue of that snake VP came up, and he told me that he did not believe me at the time, and I told him he should have.

In any event, messengers are often shot.

So much for Trump hiring only the best people

This time… borrowing from Nancy P… you have to hire someone to find out what they are really like. Ask any employer.

Doesn’t wash. Trump made his TV bones by pretending to be the guy who always knew who to hire.

Bad news. Those *are* the best people.

There doesn’t seem to be any Smedley Butlers around anymore.

There doesn’t seem to be any Smedley Butlers around anymore.

I found out about General Butler’s foiling of a plot against FDR just yesterday. Quite instructive and relevant, especially the apparent cover-up, and the coordinated efforts to smear the General.

“Hiring the best people” is a euphemism for “firing the worst people”.

Grant and Harding are popularly ranked among our worst Presidents primarily because they didn’t know when to fire bums.

His signature “You’re fired!” may end up being one of DJT’s most valuable contributions to American politics.

When I was a kid, I saw the musical “Lil’ Abner,” and in it was a song with the chorus “What’s good for General Bullmoose, is good for the USA!” At the time, I had not yet learned that the original quote involved General Motors.

Apparently, it’s easy for successful, powerful people to make the mistake of thinking that their personal interests coincide with that of the nation. At least, the mistake is common throughout history, and the root cause of much drama and catastrophe.

That is why we have so many elections at so many levels, not to mention three different branches of government. It’s also why we had civil service reform. Apparently we are overdue for another round of reform, and also term limits.

If I were Trump I wouldn’t care if she wants to sell her books by sucking up and making herself a heroine for Trump.

But this seems like deceptive wording to me. Replace the inflammatory word “resisted” with “disagreed” and it has a whole different feel to it. I doubt President Trump wanted to be surrounded with yes-men. The question is that once Trump made his decision did they execute or not?

Maybe any civil servant caught misusing time and/or resources should be immediately terminated, not be eligible for any other government position and lose all accrued deferred benefits.

Civil service protections are there for a reason. A CS employee who does as you list can be fired, but it takes months to go through all of the steps and appeals.

The *reason* is partisan political appointees like to surround themselves with partisan political operatives, and without CS protections, they can cook up whatever they want against people they want evicted and promote minions into those spots. Straight up CS employees across the nation tend to nonpartisan (believe it or not) political views, it’s just that DC is so jam-packed with political appointees that the ‘ratchet’ effect pushes CS employees hard to the left.

(Federal Ratchet: Republican appointees tend to accept and promote both R and D employees, but Democrat appointees don’t. Dispute if you wish, but I’ve seen it many times.)

I’m not a fan of the “civil service” appellation. Most of them serve no one but themselves. They are government employees. We should call them what they are, and we would be better off if they were limited to a decade of sucking off the government tit.

I don’t have a problem with that. Anything else leaves the nuts & bolts of government in the hands of long-term time-servers—the comfortably lazy or corrupt. Some things should be shaken regularly or they ossify.

I’m imagining that Tillerson did call President Trump a “f-king idiot”, which of course he denied

S Carolina and it’s residents remember her too, too woke , too cute by half, antiTrump until that meant the sidelines.

With a swipe of a pen she eradicated a hundred and fifty year history minimum.

Who hasn’t called their boss a f’n idiot? Someone who tattles it to the world is the one you need to look out for.

I have no trust in nikki.

Haley is a closet RINO feathering her own nest right now for a Presidential run. IMO she is wasting her time. The south will never vote for her after her stunt in South Carolina.