FIRE on Binghamton Protest of Art Laffer: “Latest in a Disturbing Trend of Protesters Silencing Others”

FIRE on Binghamton Protest of Art Laffer: “Latest in a Disturbing Trend of Protesters Silencing Others” 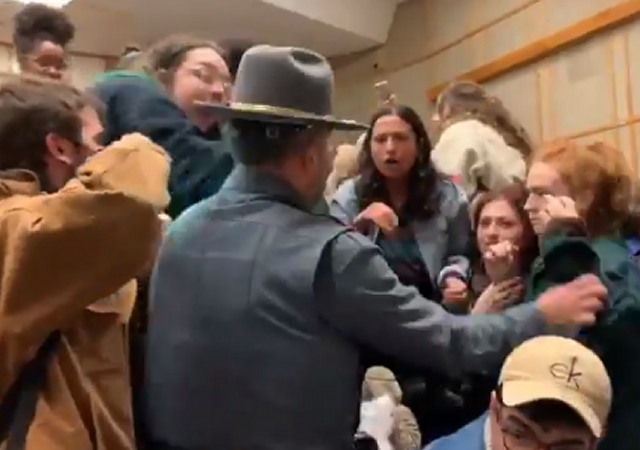 “Disturbing” is an excellent word to describe what happened. Read the full back story here.

After Binghamton shoutdown, protesters need to know how the First Amendment works

It happened again. This time, at New York’s Binghamton University.

A protester with a bullhorn hijacked a Nov. 18 lecture from economist Art Laffer, who was invited to speak by the BU College Republicans. The shoutdown, which happened just minutes after the event began, is the latest in a disturbing trend of protesters silencing others rather than debating them.

Binghamton prepped for controversy about as well as a university can — it provided an alternative space for protesters to exercise their own First Amendment rights, ensured police were on site to prevent violence, and asked attendees to save questions for after Laffer’s speech. Today, the university also issued a laudable statement acknowledging that “freedom of speech is fundamental to our core mission; academic inquiry and the exchange of ideas rest on the principle that all have a right to express their beliefs.”

On a campus still navigating the aftermath of last week’s violent confrontation between protesters and College Republicans, tensions were already high.

Authorities should not punish every instance of protest at a public speech — particularly quiet or fleeting protests. But where a time and space is reserved for a particular speaker, and protesters create a sustained disruption, colleges can and should step in. The First Amendment does not protect continuous protest intended to make it impossible for an event to continue. Protesters don’t have the right to silence a speaker’s event, and open discourse is not for sale to the loudest bidder.

In that sense, there is a sad irony in protesters chanting “Free speech!” as police attempted to allow the event to proceed. The biggest threat to free speech at Binghamton Monday evening wasn’t the police or Art Laffer — but the vigilante censors who decided they alone should dictate what others can say or hear.

You know, with the power of video software like After Effects, it would be interesting to see a video editor put uniforms on these protestors making them look like the Nazis they really are acting like.

Then they could intercut the video with videos of Kristallnacht to demonstrate the relationship between the past and present.

Oh, to have such skill! Maybe someone will do it.

Could the speaker sue the protestors for a denial of his civil rights?

Let all federal and state aid be immediately cut off to any university (or other educational institution) when this occurs. Some institutions will go belly up – good riddance – and those who prevent it will flourish, ’cause that funding would be diverted in their favor.

So Harvard would not be affected by this – they’re well endowed by private funding. But I think when it happens to a couple of colleges, the rest will get the message.

Why is this a pipe dream? Because the deep blue states would never allow their precious indoctrination centers to fold.

Next step would be to withhold funding as long as they offer what we might call “snowflake” courses. But that’s a whole ‘nuther issue.

Now back to sleep for me, to dream about other ideas for recovering our sanity at the societical (is that a word?) level. You don’t recover from 90+ years of sedition (over 4 generations) in one year.