“what we will do is have a four percent tax on income exempting the first $29,000” 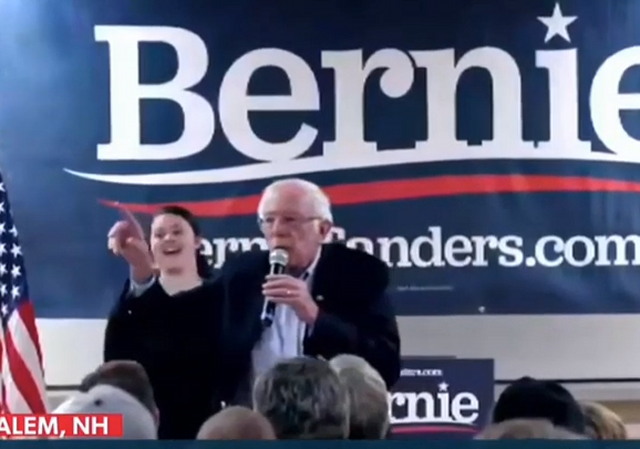 Bernie Sanders likes to talk about making billionaires pay their fair share. But he recently admitted that as far as taxes are concerned, he is coming after pretty much everyone.

During a campaign event in New Hampshire, Sanders revealed that he wants to raise taxes on low-income Americans.

Sen. Bernie Sanders (I-VT) has been one of the strongest supporters and advocates of Medicare for All. After all, he wrote the original bill for the system. While some of the other 2020 Democrats have said they wouldn’t raise taxes on average families, Sanders has been upfront and honest that taxes would need to be raised in order to pay for this new system. But he has argued those tax increases would actually cost Americans less in the long run.

Bernie has targeted the wealthy, saying they should “pay their fair share” (whatever that means), but he hasn’t been very descriptive about what tax increases would look like if his Medicare for All plan was implemented. During a town hall meeting in Salem, New Hampshire, Sanders laid out the tax proposal associated with his plan.

“What we will do — what we will do is have a four percent tax on income exempting the first $29,000,” he told a cheering crowd. “All right, good. You — you’re better at arithmetic than I am. Because what that means is if you are that average family in the middle who makes $60,000 a year, that means we’re going to tax you on $31,000 at four percent.”

Is “fuzzy math” making a comeback in 2020? Sanders, Warren, and other supporters of Medicare-for-All seem to think we can redistribute our way to ‘free’ healthcare. Voters are right to be skeptical.

Christopher Jacobs writes at The Federalist:

If You Think Health Care Is Expensive Now, Just Wait Until It’s ‘Free’

Libertarian columnist P.J. O’Rourke once famously claimed that “If you think health care is expensive now, wait until you see what it costs when it’s free.” A left-of-center think-tank recently confirmed O’Rourke’s assertion. In analyzing several health care proposals, the Urban Institute demonstrated how eliminating patient cost-sharing from a single-payer system would raise total health care spending by nearly $1 trillion per year.

Those estimates have particular resonance given the recent release of a health care “plan” (such as it is) by Sen. Elizabeth Warren (D-Mass.). Warren’s policy proposals contain myriad gimmicks and rosy scenarios, all designed to hide the obvious fact that one cannot impose a $30 trillion-plus program on the federal government without asking middle-class families to pay—a lot—for its cost.

Bernie’s total spending plans amounts to 75% of current GDP. However, this would greatly reduce our GDP so it’s more like 90%

Hope this Fake Socialist Berns through all his ill gotten gains.

Bernie is changing “work wilI make you free” to “Work will make you healthy”. The whole GDP can be buried in the quest for “good heLth”. The Leftist mantra of “we haven’t done enough” can drain the coffers. Any and all failures will be immediately covered up.

Once the 16th Amendment was added to the Constitution (February, 1913*) Congress swiftly enacted the Revenue Act of 1913 (October, 1913; Pub. Law 63-16. 38 Stat. 114), progressive rates a heralded feature. That statute was soothingly sold the same way. “Just the top. top earners will be paying, and at a really low rate.” But the 1913 statute was amended almost immediately [e.g., Revenue Act of 1916, War Revenue Act of 1917 (remember, war is Big Gov’s / Democrats’ best friend; lying is second nature to Democrats; Democrat Wilson ran on the platform of no US involvement in the European war, meaning that there would be no new taxes to pay for war costs)]. Suddenly, a huge percentage of the naive, i.e., income earners who were “promised” to remain unaffected, was included among the so-called “top, top earners.”

But it was the Revenue Act of 1918 that really brought the fangs out, setting the tone for what we are saddled with today, roping in everyone productive. No longer was the left singing a “just tax the wealthy” refrain. Now it was “Tax Everyone.” Take note of how fast that happened. The combined progressive high end tax rate was now >75%. The significance of the 1918 statute was the corralling of everyone productive into paying the income tax. And it remains with us >100 years later, except now an expanding Welfare Class (which didn’t exist in 1918; that magical event of “creation by statute” had to wait until Democrat LBJ’s Great Society programs) has been saddled onto a shrinking productive Tax-paying Class.

And once Congress started taxing income, that rang the dinner bell. Many states put on bibs and started helping themselves to heaping portions of chump-roasted taxpayers.

Oh how the times and the Times have changed.” Here’s a quote from a NYT editorial, titled “An Unnecessary Amendment,” during the period when Congress was making way for the proposed 16th Amendment, dated July 8, 1909. “When men once get the habit of helping themselves to the property of others, they are not easily cured of it.” When Peter is robbed to pay Paul, Paul’s unlikely to report the crime of robbery.

You see, once a leftist premise is accepted (progressive taxes are good; health care, housing are rights; a 4% health tax is good), then the leftists’ hard work is over. Amending and expanding is easy once the thin edge of the wedge, meaning the initial premise, has been accepted and put into place.

*Blame for the 16th Amendment goes to a group of “progressive” Republicans (yep, duplicitous RINOs have always been among us), from both houses of Congress, which pushed this effort over the top, led in no small way by the oily Senator Nelson Aldrich (R-RI). The 16th Amendment’s Article V amending resolution was passed by Congress in July, 1909, then sent out to the states for ratification. The 75% approval mark was reached in February, 1913 when Delaware said “Yes,” putting the proposal over the top

Thanks for the history/background. It helps me understand few things.

Rudyard Kipling:
And that is called paying the Dane-geld;
But we’ve proved it again and again,
That if once you have paid him the Dane-geld
You never get rid of the Dane.

I hope Bernie dies with his d**k in his mouth.

“I will raise your taxes and raze your health care!”

thinking the same thing, bernie, kamala, and lizzie don’t have to wait to be president to raise taxes on the rich, they are in the senate and they can do that anytime they want. they can take their comedy routine on the road and call it ‘ the three stooges 2020’

Warren is proposing the exact same “medicare for all” garbage, only her plan will be paid for with fairy dust.

At least Bernie is maintaining some contact with reality.

Those on the Left never get tired of dreaming up new and more ways to take from those who work in order to give to those who don’t so they can buy votes for themselves with your money and so they can keep raising your taxes.

Bernie’s total spending plans amounts to 75% of current GDP. However, this would greatly reduce our GDP so it’s more like 90%.