As clashes devolve into Medieval combat, the US economic commission recommends that Washington suspend the city’s trade status if China intervenes with troops. 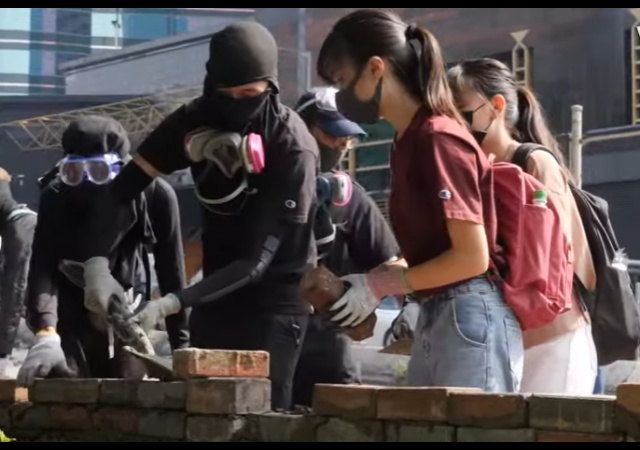 Hong Kong pro-democracy protesters have paralyzed parts of the city for the past several days by forcing schools to close, blocking highways, and escalating the intensity of the demonstrations.

Protesters have torched vehicles and buildings, hurled petrol bombs at police stations and trains, dropped debris from bridges on to traffic below and vandalized shopping malls and campuses, raising questions about how and when more than five months of unrest can be brought to an end.

…The unrest was triggered by what many see as the stifling by China of freedoms guaranteed under the “one country, two systems” formula put in place when Hong Kong returned to Chinese rule in 1997.

The protests, concentrated at the universities, have taken on a Medieval nature.

As a rolling strike cripples the transport system of the famously frenetic city and fuels already intense clashes with police, hardcore protesters have bolstered their arsenal of Molotovs and bricks with an unlikely array of weapons.

Those include sports gear – javelins and bows and arrows lifted from university storerooms, as well as tennis racquets to bat away tear-gas canisters.

Chairs and mattresses have been pulled from college dorms for use as barricades or shields against increasingly heavy barrages of police rubber bullets.

This homespun approach has also taken on a medieval edge in one of Asia’s most modern cities.

Giant wooden catapults have been constructed from scratch, while caltrops – three-pronged spikes made of plastic piping and nails – have been laid to impede officers on foot alongside mazes of bricks to trip up police snatch squads.

American groups are beginning to respond to the escalating violence and potential response by China. For example, American universities are canceling Hong Kong study abroad programs.

“Georgetown University’s study abroad programs in Hong Kong have been canceled for the remainder of the semester because of protests in the region,” the tweet reads. “Students are working to leave in the coming days, according to three Georgetown students on the programs.”

The US Senate has now initiated an expedited “hotline” process to pass the Hong Kong Human Rights and Democracy Act.

US Senator Marco Rubio, the bill’s sponsor, and Senate Foreign Relations Committee chairman Jim Risch, started the quick passage process in a bid to speed up the passing of the bill, which would clear the way for sanctions against individuals deemed to have violated Hong Kong’s autonomy from mainland China.

The strategic procedure carried out by the Senate’s leadership checks for last-minute opposition to bringing a bill immediately to the floor for a vote. If no senators voice opposition to sidestepping a formal vote, the bill passes.

Additionally, the US-China Economic and Security Review Commission, which has a mandate to advise US lawmakers on the implications of Washington’s economic relationship with Beijing, recommends that the country suspend the special financial status granted to Hong Kong if Beijing deploys its military forces in the city.

“Hong Kong’s status as a separate customs territory, distinct from mainland China, is under pressure,” the commission, which was established in 2000 as part of Washington’s acceptance of Beijing into the World Trade Organisation, said in its annual report.

“Beijing’s more assertive imposition of sovereign control over Hong Kong undermines the ‘high degree of autonomy’ that underwrites trust in the Hong Kong government’s ability to restrict sensitive US technologies from being diverted to mainland China,” it added.

This is how a free people fight against communism. Or eventually “progressivism”.

notamemberofanyorganizedpolicital in reply to Whitewall. | November 15, 2019 at 6:11 pm

Communism and Progressivism are One and the Same.

Whitewall in reply to notamemberofanyorganizedpolicital. | November 15, 2019 at 6:23 pm

Correct. Progressivism is entro to communism for slow learners.

notamemberofanyorganizedpolicital in reply to Whitewall. | November 15, 2019 at 7:02 pm

Wasn’t it Lenin who stated that “Socialism” was just a stepping stone to Communism?

pfg in reply to notamemberofanyorganizedpolicital. | November 15, 2019 at 7:49 pm

Another description was that a communist was a socialist in a hurry.

We cancelled the last leg of long-ago planned travel that was to end in Hong Kong, a city we’ve not been to and looked forward to seeing. We talked to the State Department who, while not outright banning US residents from traveling there, suggested if we do go, we be “constantly vigilant”. Our travel agent said many of her clients are choosing not to be tourists there now.

Ya, I am sure all the violence is coming from the demonstrators./s

The demonstrators are destroying things, but haven’t been very violent, unless property destruction is violence.

Many mainland Chinese owned business have been targeted. Go watch Michael Yon’s videos on YouTube. You’ll get an idea.

The young Hong Kongers are really just trying to make a statement. They want freedom, not tyranny. Their best hope is that the mainland starts to rise up with all the growing economic pressure building up as China’s economy starts to fail as the US decouples itself from mainland China thanks to the authoritarianism of the Beijing prince-lings.

They made the statement months ago, years ago. Do they break things and set fires and put people in danger until they get a “yes” answer?

It seems they are being defeated. They’ve given up most or all the university campuses except for HK Polytechnic, which they hold especially because it’s at a hub of many roads, and they wanted to “bring Hong Kong to a halt” according to one of the protesters.

But they’re losing that too. It looks like the police will succeed without having to provide them with any videos that they can use to blame China for what happened.

The sweet, fair-skinned HK Chinese lasses shown in the screenshot are not hardened radicals. They’re not latter-day Madame Defarges. Mainland rural Chinese would flay them alive.

The young students aren’t prepared for what may happen next. They think the person standing next to them will die for The Cause. Getting killed is an abstraction. Tienanmen is only a impressionist painting to them – a historical myth-fiction. That’s how young people think. The arrogance of youth will betray them.

What if they all got free vacations to a US-run boot camp? Run by entrepreneurs on ‘vacation’, of course. Describe it as a tourist action experience, except the training happens to be the same as usual. Training includes machine shop and how to make your own RPG, all to, uuhhmmm, honor Great Chairman Mao or somethin’.

yeah, not very practical. Plan B:

Give all the young ones who are building professional or technical skills asylum and green cards here, while at the same time “loaning” our Antifa and BLM members to HK. If we could move the Japanese to temp camps based on almost nothing, we can certainly move real anti-US types into a diverse, multicultural vacation for cause.

dropped debris from bridges on to traffic below

This is no laughing matter. People get their faces ripped off this way.

Hell, they might just as well stop pussy-footing and start a genuine assassination program. They’re practically there now.

Well, that’s different. Caltrops were indeed medieval weapons in the West, but they were specifically intended to cripple horses, not men.

Anything the US threatens it will most likely have to do. The Chinese hate internal disorder, and do what they must to bring it into line. So if they think troops are needed, then troops they will use, and no “foreign barbarians” will influence that.

Hell, they might just as well stop pussy-footing and start a genuine assassination program. They’re practically there now.

The aforementioned Michael Yon has been adamant that this is no longer “protesting” it is a full-on insurrection and civil war.

notamemberofanyorganizedpolicital in reply to gonzotx. | November 15, 2019 at 7:03 pm

The NBA, Bernie, and the Squad will cheer Xi on.

I believe that’s nonsense. China knows all eyes are on what it does. We can see the students throwing Molotov cocktails and catapulting bricks and destroying much property that is not theirs, both public and private. But people are watching how the Chinese and the police respond. Generally they look much better than the protesters, and they want to keep it that way.

Not everything in the world depends on Trump.

I find your report incomplete. Motorcycle cops are running over protestors. These are not the HK police. They have been withdrawn. These are paramilitary police from the mainland. Remember Trump’s tweet that we can see movements from the mainland to HK? https://twitter.com/hoccgoomusic/status/1193702352429019136?s=21

If China uses military violence, it would take quite a long time, not a single day, rather night’s action, like Tienanmen. These valiant people would try to make it as like Stalingrad as possible – all videoed out to the world.

Vote democRATs out of office BEFORE it gets this bad here!!