“Here’s a man that could not bother to show up for a meeting of police chiefs, the most respected people, in his hometown.” 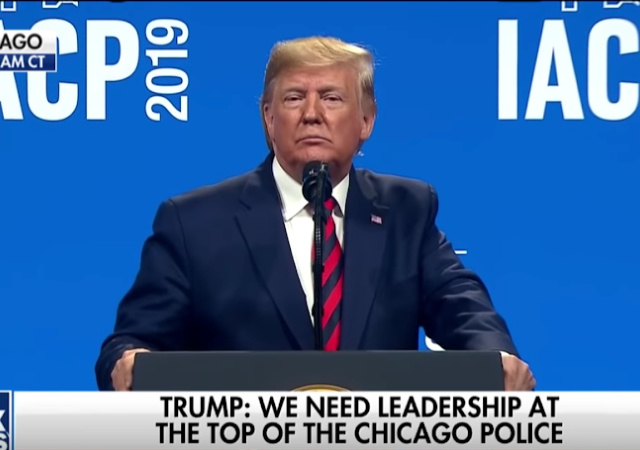 President Donald Trump slammed Chicago Police Superintendent Eddie Johnson during his speech at the Association of Chiefs of Police conference in Chicago. From The New York Post:

“There is one person that’s not here today. I said, ‘Where is he, I want to talk to him. In fact, more than anyone else, this person should be here because maybe he could learn something. And that’s the superintendent of Chicago Police chief Eddie Johnson,” the president said in the Windy City.

“A few days ago, Johnson said quote, ‘The values of the people of Chicago are more important than anything President Trump could have decided.’ I don’t think so. Because it’s a very insulting statement,” Trump told the crowd, who’d been fired up as “Macho Man” blared from the McCormick Place ballroom speakers just before he spoke.

“After all I’ve done, and I’ve done more than any other president. Here’s a man that could not bother to show up for a meeting of police chiefs, the most respected people, in his hometown. And with the president of the United States.”

Johnson announced last week he planned to skip Trump’s speech due to his personal feelings towards the president.

Chicago’s Fraternal Order of Police (FOP) voted “no confidence” against him due to his decision.

Graham told [Steve] Doocy: “He has said that he has problems with President Trump. And, my feeling is, there are plenty of people that I have problems with but, the reality is when police officers are out on the street, we do not engage in political activity.

“The reality is that we are here to enforce the laws and, unfortunately, the police department doesn’t get to choose which laws they want to enforce. We try to enforce them impartially and if you want laws changed, you go to that body and try to change them,” he stated.

Perhaps Eddie Johnson changed his tune after members of his own police force caught him asleep in his car after having a few drinks. He was not arrested.

He is now wholly owned by the Chicago Machine.

After his he now love Jusse Smallet?

notamemberofanyorganizedpolicital in reply to dystopia. | October 28, 2019 at 3:11 pm

Was DiFi and her Communist Chinese driver in his car also?

He was not arrested

Unlike a mere “civilian”.

Sir, Mr. Johnson must protest. His highly trained Chicago Police Officers were instantly able to detect there was no DUI there. Instantly. That’s good training (and job preservation).

Of course had it been me or thee, we would have been in handcuffs at the Police Station blowing into a breathalyzer.

Breathalyzers are used in the field. At the jail, official BAC would be determined by a blood test.

I guess not much has changed since the days of Billy Flynn (Chicago the movie and play). So Eddie Johnson is now going to so the Roxie Hart dance. You want me to hate Trump, I’ll hate Trump.

Perhaps Eddie Johnson changed his tune after members of his own police force caught him asleep in his car after having a few drinks. He was not arrested.

He is now wholly owned by the Chicago Machine.

You get what you vote for.

Police union leadership has shoveled billions of dollars to Democrats over the last few decades.

THEY get taken care of, while the rank and file gets called racists if they attempt to enforce the law.

Chicago PD refers to him as special Ed

Here we have the 2019 International Chief’s Of Police summit. It is being held in Chicago. This means that the Chicago PD is essentially hosting the event. So, the head of the host police department, the Superintendent of Police, decides to boycott his own summit. Not only is this a slap in the face to the President of the United States, but it is a slap in the face to everyone of his peers, the other Chiefs of Police. And, it makes him look weak, because if he had any power he should have been able to stop an invitation to the summit. And, then he looks weak and petty because he refuses to show up. Terrible optics, even in Chicago.

But, it gets worse. It allows the President to tee off on the Commissioner and the City of Chicago for the horrendous crime problem there.

Does anyone think special Ed is the best qualified person for the job or is it possible Ed is a steaming pile of affirmative action?

If you look around at many major police departments, you’ll find that qualifications and local extortion experts demand black, female, or black female chiefs.