Chicago Police Union Criticizes Superintendent for Skipping Trump Visit: ‘We Do Not Engage in Political Activity’

Chicago Police Union Criticizes Superintendent for Skipping Trump Visit: ‘We Do Not Engage in Political Activity’

Trump will address the International Association of Chiefs of Police next week at its annual convention. 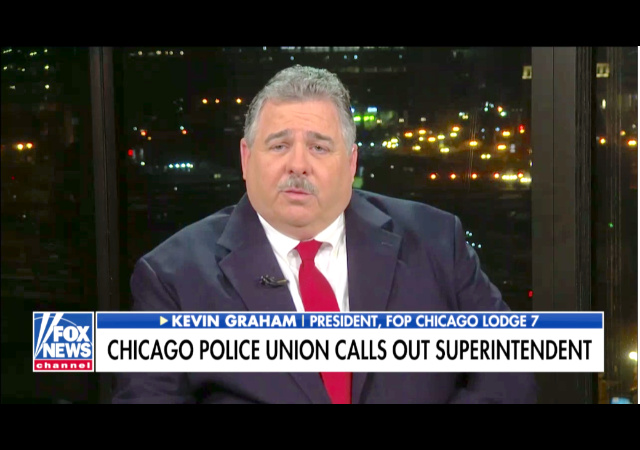 On Fox and Friends this morning, Chicago Fraternal Order of Police President Kevin Graham tore into Chicago Superintendent Eddie Johnson over his decision to skip a speech scheduled next week from President Donald Trump:

Graham told [Steve] Doocy: “He has said that he has problems with President Trump. And, my feeling is, there are plenty of people that I have problems with but, the reality is when police officers are out on the street, we do not engage in political activity.

“The reality is that we are here to enforce the laws and, unfortunately, the police department doesn’t get to choose which laws they want to enforce. We try to enforce them impartially and if you want laws changed, you go to that body and try to change them,” he stated.

“He is the president of the United States. And, the reality of this is there are plenty of times I’ve sat listening to speeches that I didn’t care for, and I certainly didn’t walk out on them,” he said.

Graham noted that the city of Chicago has “derived a great deal of support” from the president, particularly with ATF agents and federal prosecutors that “prosecute our gun laws because our local prosecutor hasn’t done the job.”

“And, it’s driven down the crime. Last month we took a thousand guns off the street. Last month alone,” said Graham.

Trump will address the International Association of Chiefs of Police next week at its annual convention.

Johnson said he will not attend:

In a statement issued on Wednesday, Johnson said that he “understand[s] and respect[s]” that the board is upset with his decision not to stand alongside the president.

“As police officers, our job is to be the voice or the voiceless and ambassadors to the communities that we serve,” he said. “I can’t in good conscience stand by while racial insults and hatred are cast from the oval office, or Chicago is held hostage because of our views on New Americans.”

Johnson’s spokesman Anthony Guglielmi said that “The values of the people of Chicago are more important to [Johnson] than anything that could be discussed at that speech.”

The union then voted “no confidence” against him:

“The FOP would be extremely disappointed if Superintendent Eddie Johnson would disrespect President Trump by not attending the President’s speech at the convention, as has been suggested in the media,” the FOP wrote in a post Tuesday.

“Such a gesture would be an insult to both President Trump and the office of the presidency itself and would be a mark of disgrace upon the city throughout the entire nation, including Mayor Lori Lightfoot.”

A spokesman for the union confirmed the no confidence vote to WTTW News, but provided no further comment.

The union described the decision as “the last straw.” The department recently placed Johnson under an internal investigation after officers found him “slumped over in his vehicle” at 12:30 AM last week. The responding officers allowed him to drive home.

Johnson claimed the change in his blood pressure medicine caused his drowsiness. Mayor Lori Lightfoot said the superintendent enjoyed “a couple of drinks with dinner” that night.

This is not the first time a police union has criticized a local official for engaging in political activity against Trump.

Kroll also took issue with a new rule that does not allow “off-duty officers from appearing in uniform at political rallies or events.” The police chief and Frey claimed the rule is not political, but the union did not believe them.

Seeesm CPD is all about politics when it is liberal.

IIRC it was at DePaul University that had a extra cost “security” for Milo Y that, in police uniform, stood back arms folded while the protesters attacked those who tried to attend the speech.
https://www.washingtonpost.com/news/volokh-conspiracy/wp/2016/05/25/speech-by-conservative-speaker-milo-yiannopoulos-shut-down-by-protesters-at-depaul-police-and-security-dont-intervene/

Chicago is a mess–the teachers are out on strike, wanting a contract that addresses affordable housing for students, and assistance with buying houses for teachers. There is no money. Chicago is broke; the State is broke; and the Mayor’s answer is to tax Uber rides, restaurants, and perhaps increase the property tax at some point.

Now the teachers are conducting civil disobedience classes–I assume they’re going to obstruct traffic like the resistance group in London.

Cook County also has a State’s Attorney who doesn’t prosecute serious crimes; cut a sweetheart deal with Jussie Smollet at the request of an Obama insider; and is despised by the police. They also have a number of liberal judges who release criminals on ROR bonds; and now they’re talking about restorative justice.

At this point I don’t know why anyone wants to live and work in Chicago.

Well, the FOP could always use a cardboard cutout of Super. Johnson as a stand in.

Besides, the cutout would be just as shallow as Johnson is. Really, no difference at all in attendance either.

Interesting that a union is supporting President Trump.

Is this the same Eddie Johnson that was found by police <a href="https://www.nbcnews.com/news/us-news/chicago-police-superintendent-had-been-drinking-he-was-found-asleep-n1068986 sleeping in his car after a couple of drinks. Someone called 911 on the Superintendent. Responding officers took him home and failed to perform the Standardized Field Sobriety Tests.

I think the Superintendent will do what he is told now.

Chicago is one of the most corrupt cities in the United States. A large portion of the Dems/Progs constituency is criminal. No surprise here. Keep electing crooks, then act startled that gangs run everything.

The guy in the picture is saying “Nice place. Be a shame if something happened to it…”

““As police officers, our job is to be the voice or the voiceless and ambassadors to the communities that we serve,” he [Johnson] said.

I loathe this state.

Police Chiefs are hired precisely for their political persuasions

Chicago is held hostage because of our views on New Americans.

As far as I know Chicago’s views on new Americans (or even New Americans) are exactly the same as the President’s. Their differences concern people who are not Americans, new or old, and who aren’t even eligible to become Americans.