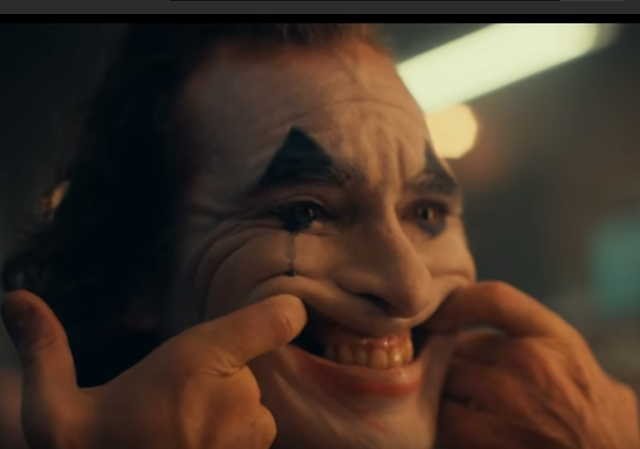 When Joker premiered in August at the Toronto International Film Festival it was met with cheers as a modern masterpiece and an 8-minute standing ovation. The radical new take on the famous DC Comics villain, an homage to the style of Martin Scorsese films like Taxi Driver and The King of Comedy, is supposed to be one of the year’s best films.
Unfortunately, the past month has brought a great deal of controversy and woke anxiety about how the film is going to be received culturally. Many in the film press immediately began pontificating that the movie could become a source of incel/far-right violence during its opening weekend.

The film’s star Joaquin Phoenix was asked directly about the film’s controversial content and walked out of an interview to ask his producers how he should answer the question.

Joaquin Phoenix walks off interview after being asked about violence in 'Joker.' https://t.co/rtwlvPyAnY pic.twitter.com/e20YknhbyZ

The antagonism between Warner Brothers and the film press is at a point where they announced that they’ve disinvited the interview press from the movie’s red carpet premiere.

“Our red carpet is comprised of photographers only,” a studio spokesperson told Variety, “a lot has been said about ‘Joker,’ and we just feel it’s time for people to see the film.”

The film press aren’t the only ones worried about violence at Joker screenings. The Army sent out internal memos in early September warning soldiers attending the movie that incel violence was possible.

As reported by Daily Wire,

In a memo sent on September 18 and confirmed by U.S. Army officials on Tuesday, service members were informed about threats on social media about a mass shooting at a “Joker” screening. While the memo states that at the time there were “no known specific credible threats to the opening of the Joker on 4 October,” a separate memo sent Monday by senior officials of the U.S. Army’s criminal investigation division cited “credible” intelligence of such a threat gathered by Texas law enforcement.

The term ‘Incel’ refers to an online community known as “involuntary celibates.” It’s a group largely comprised of young men who struggle to connect with women. They’ve developed an underground culture that divides human social/sexual interaction into a strict hierarchy which they believe they’ve been wrongly imposed.

The culture is self perpetuating enough that members can develop a deeply self loathing complex to the point where some of them lash out at women. This has been the case with several individuals who have gone on killing sprees who shall go unnamed as to avoid giving them further attention.

While the threats may prove to be little more than deep web internet chatter or bait to make the media freak out, some fear there is cause for concern that someone is going to attempt a copycat shooting of the 2012 Aurora, Colorado shooting at the movie theater where a man dressed up as the Joker character and shot multiple people.

Given the prevalence of Joker/Clown-themed memes on the fringe right and the Incel community, it’s not impossible that something like that could happen again with such a topical movie but the recent egging on and persistent fears amongst progressive critics that the movie is actively feeding “dangerous” culture narratives seems to be creating a feedback loop.

Is the backlash over the new 'Joker' film mere moral panic or does the film actually sympathize with incel culture? https://t.co/LsTMk8dhjJ pic.twitter.com/xEngE06dTY

Why the Joker movie is problematic. Rachel Miller nails it. pic.twitter.com/vTHlVOBHCY

All too frequently the media fails to take their own culpability into question when horrific shootings happen. The discussion devolves into gun control demands and mental health debates. Mass shooters want attention. When the media plasters a mass shooter’s name all over the headlines it brings them the attention they want.

As stated by the National Center for Health and Research,

Studies indicate that the more media attention a shooter gets, the more likely the event will inspire a future mass shooter. For example, a 2015 study found that after a mass shooting, there was an increased chance of another one occurring in the next 13 days.[9] A 2017 study found that media coverage of a mass shooting may increase the frequency and lethality of future shootings for much longer than two weeks.

When Rolling Stone, The Guardian, Forbes, Vulture, Gizmodo, Comic Book Resources, MSN, Fox News, ABC, CBS and every major news source repeats “Will Joker cause violence?”, you’re amplifying an idea that one person may decide to act on.

If something happens and God forbid someone gets hurt, it won’t be the fault of Todd Phillips, Joaquin Phoenix and Warner Brothers just as it wasn’t Christopher Nolan or The Dark Knight Rises‘ fault in 2012.

Are there actual threats, or is this another case of the media/studio creating a fake controvery for attention?

They’re creating a media storm HOPING that somebody is going to do something so they can validate their idiocy. And given some spree killers desire for mass media coverage, it MIGHT be successful.

It’s a situation that absolutely WOULD NOT exist without the scumbags in the media.

notamemberofanyorganizedpolicital in reply to Olinser. | October 2, 2019 at 5:41 pm

In short,
it’s all the Democrats doing………

…doesn’t legally exist. But as a form of silencing rhetoric…

Hate speech apparently exists in Illinois. A guy was recently arrested on charges of battery with a knife against a gang of Blacks. When video evidence showed the guy was lawfully defending himself against a gang attack, the battery charges were dropped. However, because the guy reportedly used the n-word toward the gangsters, he is now being investigated for a hate crime.

In Illinois, as in other places in the U.S., a hate crime must include an underlying offense. You don’t provide the instance, but you are probably referring to Ranferi Basilo. The people Basilo assaulted were not causing trouble. He pleaded guilty to a hate crime, and was sentenced to two years in prison.
https://patch.com/illinois/glenellyn/lombard-7-eleven-clerk-who-yelled-racial-slurs-sentenced

“year’s best film” is a damn low bar to clear, given the dreck Hollyweird spews out these days…

Indeed, that bar is so low, it’s next to dinosaur bones.

” taxi driver ” was disturbing–though artfully made, the subject matter was twisted to say the least–deniro’s travis bickle was gut-wrenching–unfortunately, have known a few just like the character–the film did launch jodie foster’s career–she went on to some excellent films

phoenix is an odd one–he was excellent in ” gladiator ” and in ” American Beauty “(a brilliant film IMO)–in a way, he’s like depp–a genuine introvert in real life, totally divorced from his screen personas

texansamurai: phoenix is an odd one–he was excellent in ” gladiator ” and in ” American Beauty “(a brilliant film IMO)

We hear that Joaquin Phoenix as the Joker is up for an Oscar for most acting in a motion picture film.

I think Jesabel is onto something. The “if it bleeds it leads” dirty-laundry media (thanks, Don Henley) must be suffocating after going so long without another mass shooting to freak out about.

Direct your advice to,

We don’t commit mayhem nor do we litter.

Is Kamala the Joker?

Kamala has come out against Free Speech.

Everything the media does is for clicks. The more hype, the better, as far as they’re concerned.

‘Year’s best film’?
If Joaquin farted would it win a Grammy?

I don’ know. But, if he fahrted in Germany, he would certainly go the distance! /ducking

I don’t plan on seeing the movie, not because I find it “problematic” but because any attempt to explain the Joker is silly and must fail.

The Joker is just nuts.

Am I the only one disturbed by Heather Antos’ completely unnecessary references to “white” boys and “white” men?

I laughed. SHE is the type of woman who is rejecting these — what is i now? — incels.

I presume she would have hated “Falling Down,” but she’s probably not familiar with it.

It’s not like Taxi Driver caused anyone to try to kill someone.

Maybe Martin’s looking to add another silhouette mark to his fighter plane. What do they use for Presidents, eagles? Who knows, maybe he’s going for Ace…

It’s not “right” wing men who can’t find a woman to have a relationship with, it’s the left wing soy boys

It’s not “right” wing men who are violent, who obsess on video games, and comic book figures and have no ability to form relationships, it’s left wing nut jobs.

Helps explain the hard-on for Islam a lot of them seem to get. Traditional Muslim culture has arranged marriages.

“… the 2012 Aurora, Colorado shooting at the movie theater where a man dressed up as the Joker character and shot multiple people.”

This misconception has been around since it happened. No, the Aurora asshole did not dress up as the Joker.

Are these the same woke critics that find Chappelle’s latest offering problematic also?