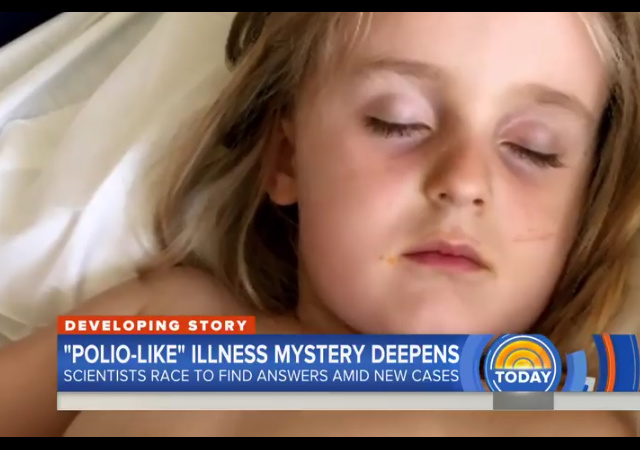 Last year, we reported on outbreaks of Acute Flaccid Myelitis (AFM) in the US. The poorly understood illness, which can cause paralysis and death in rare cases, infected over 200 children in 31 states.

Scientists have narrowed down the cause of the illness.

A new study conducted by researchers at the University of California, San Francisco and published Monday in the peer-reviewed journal Nature Medicine, suggests that the devastating disease could be caused by a strain of a respiratory virus called enterovirus.

AFM cases are exceedingly rare; fewer than one in a million children are affected. But for a small number of children, the results are devastating.

It can paralyze a child’s arms and legs. Some need ventilators to breathe. It can also cause muscle weakness, slurred speech and difficulty moving eyes and swallowing.

Many scientists attempted to find the “missing” virus in the spinal fluid but failed with traditional testing methods. Experts remained skeptical after the virus couldn’t be found in 98% of AFM patients, later proposing that the disease may have been caused by an autoimmune disorder.

The scientists focused on detecting the immunological remnants of a common seasonal enterovirus in spinal fluid from dozens of patients diagnosed with AFM.

Epidemiologists tracking recent U.S. cases of AFM already had reasons to suspect a relatively common enterovirus called EV-D68 known to cause generally mild respiratory illness. The timing and location of AFM cases seemed to coincide with EV-D68 outbreaks in 2014, 2016, and 2018. AFM patients, most of them young, commonly had other symptoms consistent with EV-D68 infection, such as cough and muscle aches, days before the condition struck. And a strain of EV-D68 can trigger AFM-like symptoms in mice.

…In the new study, Wilson and his collaborators searched for indirect evidence of a viral invasion: antibodies in spinal fluid that would suggest the viruses had provoked an immune response. They analyzed fluid from 42 children with AFM and 58 children with other neurological diseases, who acted as controls. The researchers exposed each sample to viruses displaying peptides from thousands of different viruses on their surface.

Only levels of antibodies to enterovirus peptides were significantly higher in the AFM patients, the researchers report today in Nature Medicine. Even though just one of the AFM patients had detectable enterovirus RNA in spinal fluid, 69% of them had elevated antibodies against enteroviruses versus 7% of controls. “[Enterovirus] infection probably underlies most AFM cases tested in the present study,” the authors conclude.

There have been 20 confirmed cases of AFM this year. Researchers still have many questions to address related to this disease.

…[B]ecause enteroviruses are extremely common, scientists are still trying to figure out why fewer than 1% of infected children get AFM, and they’re also trying to understand why children are the only ones affected. “We don’t know for sure why children get paralysis and adults don’t,” Schubert said. “The thinking is that young children have low immunity to the virus that increases as they get older, so we see the most severe effects in children around the age of two. But more work needs to be done to understand AFM.”

For study co-author Riley Bove, MD, answering these unresolved questions is a deeply personal mission. Bove, an assistant professor of neurology and member of the UCSF Weill Institute for Neurosciences, is the mother of a child who was diagnosed with AFM. Bove hopes that the new study will lead to a scientific consensus around enterovirus as the cause of AFM, since this a key step on the road to improved diagnostics and the development of a vaccine for the illness.

“Public health education is important, but it’s not enough to prevent AFM,” Bove said. “The virus is too common to avoid. A vaccine is the only way to meaningfully prevent the disease.”

AFM cases tend to come in waves every 2 years. The next big cycle would be in 2020. Hopefully, research will have answered the key questions and scientists will have developed a vaccine by then,

If we had a map overlay of where high levels of illegal immigrants settle and this “mystery disease” occurs, what would we find?

Probably nothing at all. Especially if this report turns out to be correct, and the illness is an unusual reaction to enteroviruses. Enteroviruses are everywhere, and there is no reason in the world (other than outright racism) to suspect immigrants, legal or otherwise, of bringing them in.

Right, no reason other than the proven fact that illegals bring a multitude of diseases with them.

And it is pathetic when the only response is “That’s racist!”. You’ve already lost the debate.

Proven fact?! Who exactly has proven it, and when? In any case, enteroviruses are no less common in the USA than in any other country, so it’s nonsense to blame it on immigrants; the only reason it would occur to anyone to do so is racism.

You are moving the goalposts, but no surprise.

No other reason in the world, except for all the other cases of 3rd world diseases that have been showing up in California.

The trend was noticed by grandparents of children in elementary schools. It seems that illegal alien children were allowed to disperse into CA schools without prior medical evaluation, and suddenly these odd disease started cropping up in that population.

No reason, not at all, and we all live in China, now.

This is not a “third world disease”. Therefore your entire comment is irrelevant.

The “virus” started occurring in 2014 in the USA, about the time illegal aliens began their increased overrun of our Country, bringing numerous, before eradicated diseases with them.
That’s not racist, that’s a fact and that’s science!

Enteroviruses were never eradicated in the USA. They’re no less common here than anywhere else. Therefore only a racist would even think of blaming them on immigration.

“Illegal alien” can be quite the inkblot test. I suppose some see it as racist, because they have formed a concept and/or image of what/who illegal aliens are. I promise you, there are Caucasian illegal aliens living in the USA. My opinion is they should be deported under the concept of equal application of the law. Back to the article: To pretend someone born/raised in a completely different pathogenic environment, with different standards of healthcare/immunization (or no standards at all) might not bring something here that we are not immunized for is dangerous.

Strawman. I did not suggest that the term “illegal alien” is racist. But some people’s ideas about illegal aliens are indeed racist. The actual racial mix of illegal aliens does not affect this, since racism is about perception, not reality. Those who blame the spread of measles, or of this new illness, on illegal aliens do so only because they are racist. Especially if the finding this story is about — that enteroviruses are to blame — turns out to be true, since there’s no basis for supposing enteroviruses to be more prevalent among illegal aliens (of any race) than among people who are here legally.

When this hit a few months ago I did some homework. It seems to spike every 2 years and has for a time. The interesting part was it coincided with the election cycle. It was cursory research no multi-million dollar work but I found it interesting.

A 4 year old in Weatherford , Texas got this disease last year, my daughter’s Pediatrician is hers.
Now my 2 y/o granddaughter has a “cold” a RV, now I have to worry every time that happens
And it’s a lie these kids return to normal, “some” get partial feeling and movement, but never “normal, some” are paralyzed forever, and then “some” die!

I grew up in the pre-Salk vaccine era. I can remember my mother getting quite hysterical about us going swimming mid to late summer because that was when the polio virus seemed to hit the most. I can sympathize with your worry.

Smart money is on a strain of Enterovirus 68 from Latin America. Political Correctness is killing our children. Prove me wrong.