Mysterious, paralyzing disease has now spread to 31 states and Canada

Mysterious, paralyzing disease has now spread to 31 states and Canada

After 4 years worth of AFM cases impacting young children, the CDC is now putting together a task force targeting AFM. 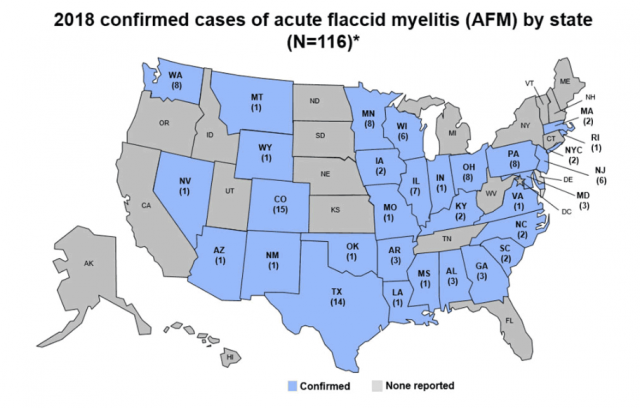 We have been following the spread of a mysterious, polio-like disease that the Centers for Disease Control and Prevention (CDC) has named acute flaccid myelitis (AFM). The illness, the cause of which remains undetermined, continues to expand its range and public health officials have recorded 286 cases.

The mysterious, rare ‘polio-like’ disease blighting the US has now spread to 31 states, sickening at least 116 children.

And yet, officials still have no idea what causes acute flaccid myelitis (AFM), nor how to treat or prevent it.

The poorly understood illness, which can cause paralysis and, in rare cases, prove deadly, has struck Colorado the hardest, followed by Texas.

The Centers for Disease Control and Prevention (CDC) is currently investigating a further 170 cases of people with tell-tale symptoms of AFM.

There has already been more than three-and-a-half times as many cases as last year, but doctors remain baffled as to what is causing the illness.

Over 90 percent of people stricken with AFM are under 18, with 4 being the average age. Cases of the illness are now being reported in Canada.

One case of an unusual polio-like illness that targets children may have shown up in Alberta, but health officials say they can’t provide a definitive answer because the specific condition is not tracked.

According to Alberta’s deputy medical officer of health, Dr. Kristin Klein, a child was hospitalized in January with a possible case of Acute Flaccid Myelitis (AFM).

While the condition is not new, cases are on the rise in the United States and doctors in other parts of Canada say they’re starting to see cases, too.

Public health officials are alarmed at the spike in cases, the continued spread, and the fact that no specific pathogen has been tied to the disease. After 4 years of continuing reports of AFM, the CDC has recently announced a special task force is being created to focus on AFM.

“This task force will ensure that the full capacity of the scientific community is engaged and working together to provide important answers and solutions to actively detect, more effectively treat, and ultimately prevent AFM and its consequences,” CDC Director Robert Redfield said…

The latest outbreak has gotten the attention of Congress, too. Sen. Amy Klobuchar, D-Minn., asked the CDC in October to investigate why the illness was spreading there.

The CDC has additional information on AFM, including the following recommendations:

Certain viruses are known to cause AFM including enteroviruses, such as poliovirus and enterovirus A71 (EV-A71), and West Nile virus.

Mysterious paralyzing disease. When I was a child we called it Polio. Thanks to the Democrats for inviting in los illegalies.

If it were simply polio the vaccine would work more reliably.

What is utterly unclear from the reports is the Polio vaccination rate among the victims.

parents in current environment are NOT having their kids vaccinated in the numbers like 50 years ago.

Indeed, they’ve got it figured out. I just saw one of them explain that the whole success story of the vaccine is a giant hoax because polio never went away, it was just renamed. What had been called polio started being called aseptic meningitis, acute flaccid paralysis, traverse myletis, Guillaume Barre Syndrome, and now acute flaccid myletis, or was simply defined away as just an unexplained temporary paralysis, all in a giant conspiracy to pretend that vaccines are effective so people would be sucked into consuming them and Big Pharma could make billions and billions. Or something like that. Trying to follow anti-vaxx “logic” is tiring; sooner or later the brain just gives up. Hmmm, I wonder if there’s a vaccine for that…

Polio was pretty hard to ignore. Between WWII an 1955, there were several thousand cases a year, and about 20 percent resulted in paralysis. My best college friend died around age 40 from post polio syndrome.

The severe form was the result of extreme cleanliness. It mostly affected the wealthy. In “dirty” places, the virus was endemic, and kids got immunized by getting mild versions. There were no paralytic cases in India.

The disproportionate effect on the rich may be why so much effort was made to find a vaccine. And the eventual vaccine turned out to be a weak , deliberately disabled, form of the virus. Artificial “dirt”.

Sadly, there is a huge amount of information, from numerous sources, that discuss the pros and cons of vaccinations.

Most of it (that discussing alleged “cons” that are entirely invented) is worthless.

Yep, in fact the “physician” that started all this Anti-Vax BS lost his medical license and was jailed for Fraud.

Vaccines are not a magical elixir without cost or consequence. And for that reason they are part of a risk management protocol, not a broad spectrum cure or mitigation strategy.

Gee, wouldn’t it be great if we had an agency staffed with bug doctors and researchers who could tackle these infectious diseases? I know we have the CDC, but they are too busy sending out their Grievance Studies and Public Health majors to shill for gun control and study lesbian obesity.

The CDC is not a “health” organization.

They are a political organization

But the map doesn’t show it.

Which hints that maybe certain persons in certain states might be covering up medical reports they think might be embarrassing.

it could also be misdiagnosed

Or, it doesn’t come from where you think, without any reason, let alone even a shred of evidence, that it comes from.

query – how prevalent is polio worldwide ?

In other words it doesn’t come from where tom_swift thinks.

As usual, you assume too much. I didn’t say where it comes from. You seem to have determined where it doesn’t come from. Without evidence, again as usual.

Gotta love the liberals. The talk often about the horrors of imperialism, such as Europeans decimating the US native population, but then they turn around and think nothing of letting the whole third world in as if it will have no adverse effects.

It was (is) racism and genocide when White Europeans enter any other area..BUT, when non-Whites invade Europe, that is progress, Diversity, Multi-Culturalism, The Coudenhove-Kalergi plan in play. Yes?

OK, some, if not most of you, are really going to have a fit here:

It is the 2nd most SHOCKING video I have ever come across and could not believe it. I bought the book, bought more books, did the research (I am in the Medical Profession, by the way, multiple degrees, including Chemistry, etc….)…and have come to the conclusion that this area of Health Care is true.

SO, enjoy, but once you are made aware of this, you can’t go back and I’ll bet you will begin taking the advice.

It has a direct and serious connection to this illness, and others.

Vaccines are not a magical elixir without cost or consequence. And for that reason they are part of a risk management protocol, not a broad spectrum cure or mitigation strategy.

I lived in California when the classmate of a friend’s son was stricken with this about 4 years ago just before her high school graduation. I remember thinking at the time that it seemed a lot like polio but no one was saying much of anything.

So I find it curious that California is not reporting any cases. Actually I find it very suspicious since the state is Ground Zero for illegal immigration.

Richard Grant- I don’t watch any videos that are claimed to be “SHOCKING!”

If it’s not in California, it’s either not being reported or reported as something else. No map that looks like that excludes California. Simple math would have a couple cases. Whatever is happening is damn odd.