German state broadcaster: “Poland will continue to be a difficult partner for both the EU and Germany” 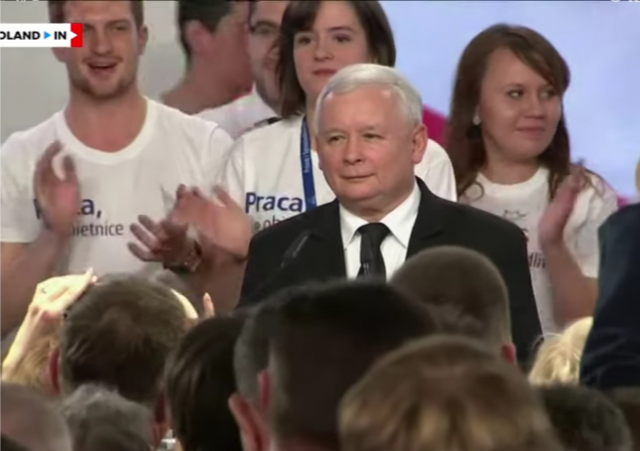 The Catholic-conservative PiS is set to secure an absolute majority of 239 in the 460-seat parliament, initial projections show.

“We have reasons to be joyful. Despite the powerful front that was arraigned against us, we were able to win,” Kaczyński said, referring to the hostile campaign waged against the party by the European Union and media establishment.

Today’s result is an endorsement of the anti-EU and pro-business approach taken by the Polish government. Despite the recession and economic slowdown hitting major European economies, Poland has registered an impressive economic growth under the current government. Since the party took power four years ago, wages have gone up, and unemployment has fallen to a record low.

The widespread support for the ruling party also rests on its firm opposition to the open border immigration policy pushed by Brussels. Poland has been the most prominent opponent of the EU’s efforts to settle illegal immigrants across all of the 27 member states.

With 99.49 percent of the ballots counted, the governing Law and Justice (PiS) party had 43.76 percent of the vote, while the largest opposition bloc, the Civic Coalition, led by the Civic Platform (PO) party, had 27.24 percent, the National Electoral Commission said on Monday afternoon.

A block of three leftist parties led by the post-communist Democratic Left Alliance (SLD) finished third in Sunday’s election with 12.52 percent, a result that would open the way for a left-wing grouping to return to parliament after a hiatus of four years, according to the data released by the National Electoral Commission. (…)

Law and Justice leader Jarosław Kaczyński claimed victory after an exit poll was released when the polls closed on Sunday evening. He told cheering supporters: “We’ve won; we’ve managed to win despite a powerful front against us.”

He added: “We have four years of hard work ahead of us because Poland must continue changing, and it must be changing for the better.”

In the run-up to the Polish election, EU officials waged a fierce campaign against the nation’s ruling party. For instance, the EU dragged the Polish government before the top EU court for undertaking justice reforms. Since taking power four years ago, the Law and Justice party have passed a series of laws aimed at freeing the country’s courts from the EU stranglehold.

The EU has also sued Poland, Hungary, and other eastern European countries for refusing to take in migrants as part of its massive European relocation scheme.

It was “populists,” like the ones running Poland, who were posing a threat to the “European way of life,” and not the illegal immigrants, EU Commission chief, Ursula von der Leyen, warned last month. These European right-wing parties “want to replace democracy, diversity and the rule of law with ‘traditional values’ and ‘illiberal’ democracy,” Politico reported paraphrasing von der Leyen, a long-time associate of German Chancellor Angela Merkel.

“Sunday’s PiS victory could also prove a headache for Brussels and several European capitals,” UK newspaper Guardian warned. The result comes as a big disappointment to the EU officials who were rooting for the pro-EU parties in the Polish election, the left-wing newspaper disclosed. “European diplomats admitting in private that many in Brussels had hoped the problem would be taken out of their hands by Polish voters,” the UK daily added.

Germany’s state media was equally disappointed at the result. With conservatives surging in polls, Poland was now moving “further toward an authoritarian dictatorship,” German public broadcaster Deutsche Welle complained. “The strong voter mandate for PiS means that Poland will continue to be a difficult partner for both the EU and Germany,” the state broadcaster predicted.

The German broadcaster also attacked what it saw as a tacit alliance between Poland’s ruling party and the country’s Catholic church, calling it disparagingly an “alliance of throne and altar.” Despite the recent Liberal stance taken by the Vatican, the Church in Poland remains mostly committed to traditional Catholic values. Today’s “victory would be unthinkable without the support of the powerful Catholic Church,” Deutsche Welle commented.

With Germany and France dominating the EU, Poland has emerged as the fiercest opponent of its transnational agenda. In the face of the EU’s relentless push for mass immigration and a European superstate, Poland has provided crucial leadership to the eastern European countries. Today’s outcome strengthens the anti-EU resistance all across Europe.

Notch up another victory for right wing racists 🙂

Diversitists, including racists, sexists, politically congruent, and other color judgments?

As they have for a couple of centuries now, Germans demand to know “Vie Von’t you do Vut Vee tells you to do!!!”

notamemberofanyorganizedpolicital in reply to Tom Servo. | October 15, 2019 at 1:59 pm

TIME FOR POLAND
TO INVADE
GERMANY for once!

The Friendly Grizzly in reply to notamemberofanyorganizedpolicital. | October 15, 2019 at 3:37 pm

I think the Dutchy of Grand Fenwick could take Germany.

[email protected] in reply to notamemberofanyorganizedpolicital. | October 15, 2019 at 3:56 pm

why on earth would they want that? german economy is slumping. they invited all the immigrants in. and herr merkel is still their leader. if anything, poland would be wise to build a wall between germany and poland.

Why is it that you call anyone to the political right of Karl Marx “right wing racists?”

“Since the party took power four years ago, wages have gone up, and unemployment has fallen to a record low.”

Isn’t it amazing what a government can do for its people when it’s actually concerned about them instead of importing unskilled immigrants and climate change?

“Since the party took power four years ago, wages have gone up, and unemployment has fallen to a record low.”

That has such a familiar ring to it. I just can’t seem to recall what country has had a similar result in the recent past.

Mystery to me too

“calling it disparagingly an “alliance of throne and altar.””

don’t forget about the poles wanting ‘tradition values’. can’t be having that now, can we.

I see the problem. It should read: legal choice and social justice.

And how does Poland feel about Brexit?

I suspect Poland itself is much closer aligned to BREXIT than some of the other, more heavily debt laden countries in the EU.

For countries like Greece and Italy, leaving the EU is not an option for them given the EU effectively owns those two countries lock, stock, barrel and the wool shed they all live in.

Good for Poland! They well remember rule by the USSR not that long ago. Brussels will eventually be as bad.

Golf clap. Now they need a 2nd amendment for the next time Germany and Russia roll over their borders.

Poland traditionally is a “difficult partner” for Germany. The reverse is even more true. While Americans educated by Howard Zinn won’t know this, I’m guessing every Polish child learns exactly what the Germans have done to their land over the past millennium.

Meaning “Give them an inch, they’ll take a country”.

and it’s not just the germans. during wwii thousands of free polish army soldiers and airmen fought side by side with the allies. polish pilots help defend london during the blitz.
when the war ended the allies showed their gratitude by rounding up these brave warriors and shipped them back. right into the waiting arms of uncle joe!
i hope they have learned this lesson; trust no one whose name doesn’t end with wicz, ski, or czky.

“Poland will continue to be a difficult partner for both the EU and Germany”
GOOD! As it should be.

given the sorry state of the german military, they should be thankful poland isn’t an adversary!

First, to call Poland a “right-wing” nation betrays human historical and cultural stupidity. As a Central European nation, it has fought over 200 wars and has outlasted numerous invaders over the past 1,000 years. Russian and German partitions tried to crush the Polish language, faith, and history. All failed! The language lives and so does the Polish Spirit of life. Poland is a Republic using democratic principles of self-rule that goes back to the First Polish Republic. Sound familiar?

Yea, that’s a right-winged people (/sarc). The lead banner in the 200,000 citizen march in Warsaw across the Vistula, celebrating the 100-year anniversary of the Second Republic’s Independence read “My Chcemy Boga (We Want God)”. Can YOU do that in America without the rock throwing, media hissy fits, or mockery? Not!

Have you had your personal family letters sent back and forth from Poland (1960s-1980s) censored with sentences taken out of the letter by razor blades? Have you had a family obituary censored? EU, or the communists, what’s the difference? Since censorship has ended, Polish literature and historical scholarship has exploded. Real historical study, not the PC redacted American gówno prawda of self-pity.

“[T]hat Poland will continue to be a difficult partner for both the EU and Germany.” Indeed! Stalin attempted to collectivize Polish agriculture after WW II and gave up. Think the EU will dominate a blunt, independent thinking, libertarian culture that has outlasted Tartar, Bolshevik, Russian, German, Turk, socialist and communist invasions, and internal insurrections? Good luck. Its God’s Playground (Norman Davies).

To the press and all others who judge: “Żegnaj nieznajomy, już nie chcę twoich rad.”
[Farewell stranger, no longer want your advice.]

Well, America you have patriotic songs and music and so does Poland. Written at the height of the Austrian, German and Russian brutal partitions, Polish spirit of life endured. How? Of course, this was banned by the partitioning powers and the communist censors after WW II.

Catechism of the Polish Child (like our Pledge of Allegiance)
By Władysław Bełza, 1900

The first stanza for the version for girls:

your comments are spot on! i really had to think of any additions.
i’ll give it my best shot:
when all was dark and bleak and the muslim invaders were only days/hours away from defeating vienna, only one nation answered the call. Enter Jan III Sobieski, King of Poland, and his winged cavalry the hussars. if this had not happened it’s no stretch to say europe would have fallen under the dark cloud of islam. no europe no france to help america defeat the british.
and finally, in 2016 poland officially installed Christ as the King of Poland.

Outstanding for Poland and it’s citizens. Stand firm against this EU globalist crap.

Notes from the Fourth Reich:

“Ursula von der Leyen is a German politician and a member of the center-right Christian Democratic Union, President-elect of the European Commission and the longest-serving member of Angela Merkel’s cabinet.”

In party congress photographs Leyen sits on Chairman Mao’s right next to Zhou Enlai and Liu Shaoqi while Jiang Qing and the her gang sit on his left.