“Here in this campaign, we hear the word socialism a lot.” 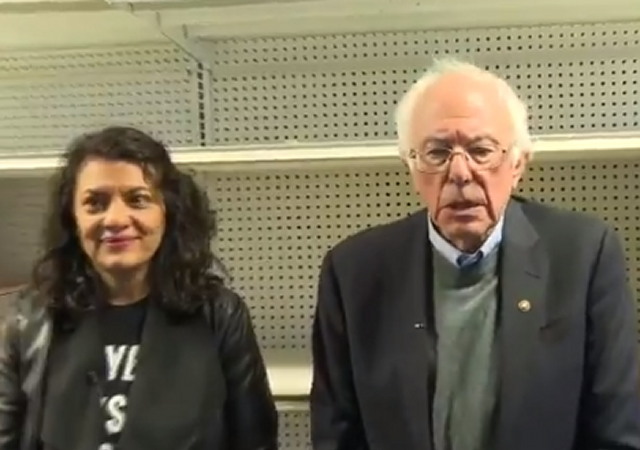 Bernie Sanders appeared in Detroit this week with Rep. Rashida Tlaib (D-MI) who had just endorsed him. At one point they spoke to the press from inside a food pantry and the optics were rather ironic.

In a visit to Detroit on Sunday, where Democratic Michigan Rep. Rashida Tlaib endorsed his presidential candidacy, Independent Vermont Sen. Bernie Sanders talked to reporters in front of some empty shelves.

Sanders was at the Brightmoor Food Pantry in Detroit to demonstrate that it was out of the bottled water that some residents are forced to buy because the city has shut off their water services for not paying the bill, the Detroit Free Press reported Sunday.

“Here in this campaign, we hear the word socialism a lot. Well, what this is a perfect example of is socialism for billionaires, massive amounts of subsidies and tax breaks,” Sanders said, during his stop. “But for children, there’s not enough money for a decent education and for poor people, there’s not an ability to get clean drinking water.”

The optics of a left-wing candidate having a photo with imagery that is closely associated with socialist failures from Soviet Russia to Venezuela was not lost on at least one reporter.

Which social media genius decided to film Bernie Sanders –the presidential candidate people accuse of being a socialist — in front of empty grocery shelvespic.twitter.com/hpPRh7irRU

It’s amazing that no one on Bernie’s team saw how this would be perceived.

FINALLY @BernieSanders uses a backdrop that perfectly shows the reality of #socialism.

@BernieSanders must be campaigning from Caracas, Venezuela.

You don’t need food on the shelves if you think breadlines are a good thing.

This is the perfect setting for us to envision the socialist utopia of Americans standing in line for toilet paper.

Seriously, what were they thinking?

Detroit… who’s been running that city for the past half century again?

I’m having a hard time deciding who I’d like to see as the democrat nominee. I thought biden would be entertaining, but now the idea is sad and cruel. bernie and warren are so angry, they’re going to get trolled into oblivion.

Sorta like choosing a meal from an empty food shelf…

Empty heads, empty shelves compliment each other, both being the fruit of socialism.

Seriously, what were they thinking?

It makes sense that he would choose that spot. After all, he’s on record saying how bread lines are actually a good thing sometimes.

Don’t take my word for it: https://youtu.be/zJBjjP8WSbc

Bernie knows that shelves full of food can be wasteful. Choice let alone appetite are only capitalist constructs. Governmental control of calories is the future.

What a pair of schlumps!

didn’t know they were campaigning in Venezuela

Sanders is a horrible parasite, corrupt, and was bought-off by hillary clinton.

Just ask her: it’ll be the first time she never lied about anything.

Interesting. Reminding us that chronic shortages of everything are an identifying feature of any economy which relies on central planning (i.e., socialism) would seem to be a catastrophic propaganda blunder. And if the socialists can’t even do propaganda right—well, what else have they got?

I saw Soviet Moscow in the 1970s, and it’s all true—loads of stores, well-lit and fully staffed, and bare shelves. As Shelly didn’t say,

. . . Round the decay
Of that colossal wreck, boundless and bare,
The lone and level shelves stretch far away.

A few things were in good supply—hats, little souvenir pins—знаки—and . . . I can’t think of anything else. Even the vital minutiae which keep things running . . . like, say, ball-point pens . . . were simply unavailable. At rare intervals something arrived at a sales counter, so crowds got in line to get one of whatever it was, even if useless—to swap it later. The trade economy was flourishing; it was only the official economy which was an animated corpse. A huge country, reduced to an empty shell by mere lousy policy.

Come on down! We’ll hold a place in line for ya!

I’m no Bernie Sanders fan, but I sure wish that the people who care about him would convince him that failing to win the presidency is not worth dying for. The poor man looks awful.

Accidental downvote that was intended to be an upvote, but I can’t seem to change it.

By the way, Bernie has always looked awful.