Joe Biden: As President, I Would Refuse to Pardon Trump Because I Want to Get Re-Elected

Joe Biden: As President, I Would Refuse to Pardon Trump Because I Want to Get Re-Elected

Biden goes on record admitting his desire to get re-elected would be the deciding factor in whether or not to pardon his Republican predecessor. Good to know. 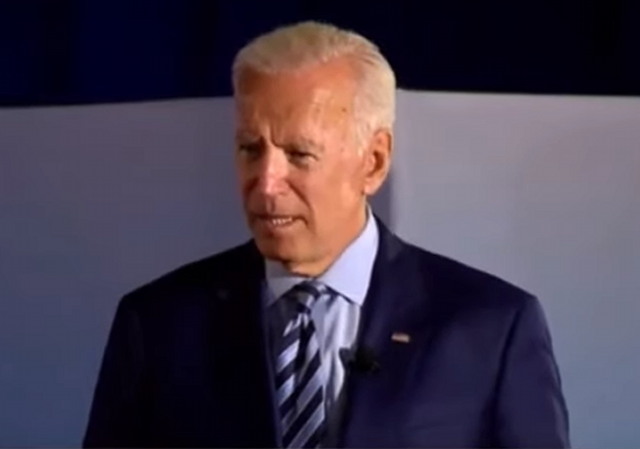 As expected, a hot topic of discussion was the Democrats’ impeachment inquiry and President Trump’s allegations that Biden engaged in quid pro quo by way of using his position as vice president in 2016 and a billion dollars in U.S. loan guarantees to have the Ukrainian prosecutor fired for investigating Burisma Holdings. Biden’s son Hunter sat on the Burisma board member at the time.

South Bend, Indiana Mayor Pete Buttigieg, who no doubt was throwing his hat into the vice presidential ring, received high praise from Biden in Iowa for defending the family from what Biden called Trump’s “outrageous, lying ads” on the Ukraine issue.

While there, Biden told a roomful of reporters on Sunday that family members would not receive perks in a Biden administration:

Biden on Sunday said at a press conference that he would build on “the squeaky clean … environment” of the Obama White House, according to Radio Iowa.

“No one in my family will have an office in the White House, will sit in on meetings as if they’re a cabinet, will, in fact, have any a business relationship with anyone that relates to a foreign corporation or to a foreign country,” he said.

He also told Radio Iowa that if elected president, he would not seek to pardon Trump:

During an interview with Radio Iowa later Sunday afternoon, Biden said if he is elected, he will not follow President Ford’s example in pardoning Nixon so Nixon was not prosecuted for his role in Watergate.

“It wouldn’t unite the country,” Biden said. “You’d say: ‘Wait a minute. I get a parking ticket and I’ve got to pay it. This happens to me and I’ve got to go to jail. This guy does all these things that put us jeopardy and he gets off? I think this is of a different nature.”

And just why would he not pardon Trump if elected president? Because he feels it would hurt his chances at re-election:

“And I think President Ford, God love him he’s a good guy, I knew him pretty well, I think if he had to do it over again he wouldn’t have done it…because he didn’t get re-elected.”

So here we have Democratic presidential contender Joe Biden going on record admitting his desire to get re-elected would be the deciding factor in whether or not to pardon his Republican predecessor. Good to know.

Should we have expected anything better from “Sleepy Joe?” No, says Hot Air’s Ed Morrissey:

Regardless, no one would expect a pardon of Trump by any succeeding Democrat administration anyway. Their bloody-mindedness in seeking his impeachment over the last two-plus years shows just how angry they are over his 2016 election victory and how dedicated they are in avenging it. This isn’t about Trump’s corruption as much as it is about Democrats’ abuse of power in the House, and how their base eggs them on to greater abuses in the name of revenge. Don’t think for a moment that a Democratic victory in the presidential election next year will slake that thirst. Democrats will still keep coming for Trump and for those who supported him. The last thing Democrats want to do is “unite the country,” as their chaotic quest for impeachment demonstrates.

Joe Biden, who if he lives will be 82 years old in 2024, is worried about getting re-elected. Riiiggghhhhtttt.

notamemberofanyorganizedpolicital in reply to Tom Servo. | October 15, 2019 at 5:07 pm

Those Communist Chinese and Globalists sure want ol’ Joe.
(Witness all the Media craziness backing him.)

Guess they want to make sure they get their money’s worth of what they’ve bought from him already.

That darn senility, he forgets he would have to be elected first and that isn’t going to happen.

The bloom is well off the rose for the Obama regime’s reign where things were far from being rosy. Biden thought he could cash in despite his towering record of lies, gaffs and corruption. Hillary thought so too.

Biden won’t even be the nominee from the leftists. So, would he go “independent”?

Biden was never going to be the nominee. The powers that be who control the DNC had no desire to see him win.

LoL. Now that’s funny. Biden actually thinks he’s going to be president. And that he’ll have a second term. Not likely Joe, not likely. The democratic leadership are going to pull a Bernie on you and nominate Warren as their candidate. Guaranteed.

P.S. Will the “Preview” button ever be fixed or is it just a feature that won’t work any longer for some reason.

Well he doesn’t need to do anything more for his kids, billions kind of does that itself…

Poor ole Plugs will be out of the running before Iowans cast their first vote. A second term…HaHaHaHa!!

notamemberofanyorganizedpolicital in reply to budmania. | October 15, 2019 at 5:08 pm

“A Second Term” in Prison!

I can believe that for you Groping Joe.

Every time he opens his mouth he gets shabbier.

Pardon Trump for what? Taking bribes from Ukraine and China?

No, wait! That wasn’t Trump. Can’t remember who it might have been though.

notamemberofanyorganizedpolicital in reply to irv. | October 15, 2019 at 5:47 pm

Think it was most all Democrats in DC…..

What’s ol’ Joe got to say about CNN secreting doing things to support ol’ Lizzie over him among the DEMS?

More of CNN’s bias, this time, favoring Warren over Biden, just as they favored La Hillary over Bernie last time.

Most of it is about the network’s bias towards Warren, and Jeff Zucker’s sleazy carnival barker approach to micromanaging each day’s narrative.

That crazy loon Biden will never be in a position to pardon anyone. He should be worried about getting a pardon for himself and that dope fiend son of his.

I thought Biden said at one point that he’d only run for one term? Or was that Pelosi?

WE cant hear yo in you Phatasmgoria Quid Pro Joe speak louder.

Apparently, Republican presidents are not permitted to work with other leaders with whom we have a legal treaty and obligation to report and investigate corruption, graf, etc.

After Horowitz, Huber and Durham are done, the rift in this country is going to be huge. The one most likely to get a pardon is going to be bho. In exchange for the pardon, he’ll have to lay out the chapter and verse of Spygate and a few other scandals. He’ll have to throw all his cohorts under the bus and apologize to the American people. PJDT has spoken confidently of many things early on, such as the “wires tapped” tweet. The msm howled and laughed but it it turned out to be true. The word ‘spying’ was dragged out of the shadows and is now commonly used in reference to FISA abuse. He has also tweeted “Treason.” That’s not a word to play around with and he knows it. My bet is the DoJ is putting an airtight case as we speak. (Yeah I know there are some that will call me a conspiracy theorist etc. but we’ll all find out soon enough).

Huber? Looks to me like he was another Rosenstein plant. An Obama Prosecutor.

I might cast a vote for a Dem at my local level. Perhaps.

A race in which there is none but Dems, for the least leftist candidate.

Hasn’t anyone told him he has incipient dementia or has he forgotten?

Projection seems to be the left’s favorite tool.

Joe doesn’t need to worry about getting elected or reelected. How about a vacation in the Ukrainian countryside?

Look at how the Democrats are handling the so called impeachment proceedings in the House. This is a harbinger of what will happen if they gain a majority in the Senate and/or win the presidency and gain far more power than what they currently have. Look at the obvious corruption of Joe Biden who not only tries little to hide it, but is actually proud of it. Look at the over-the-top claims of single payer healthcare for all, no national boundaries, etc., and you see pie-in-the-sky promises that will make today’s deficits seem trivial in comparison. The list goes on and it all leads to the same question – Who in their right mind would ever vote for these people?

That’s called talking past the sale. You have to assume Trump will be both impeached and convicted. So it’s good rhetoric, at least. I suspect a consultant is responsible.

Poor Groping Joe doesn’t need to clog his devious mind with pardons as he will never be in the position to worry about it.

The senile f.art is already talking about his re-election. SMH.