Miss Intercontinental finalist: “I am against our government. The Iran government is terrorist.” 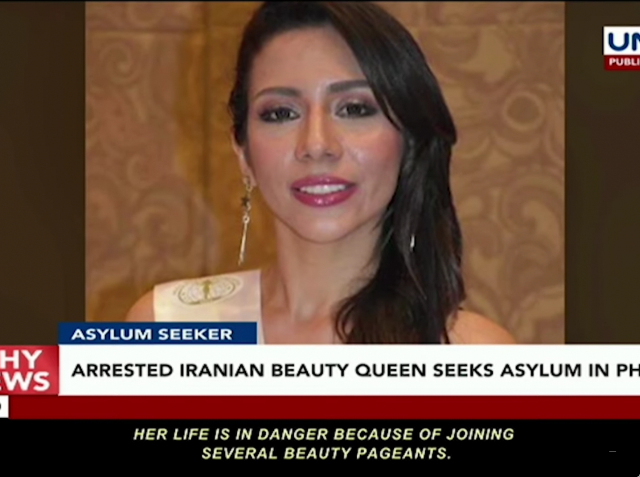 An Iranian beauty pageant contestant has sought asylum in the Philippines, accusing Tehran of targeting her for raising women’s rights issues in the Islamic Republic.

Coming out openly against the regime or speaking out for women’s rights are serious offenses in Iran. Iranian women, who removed headscarf protesting the mandatory hijab laws, have received lengthy sentences.

If deported back, the former beauty queen could face the same fate.

Bahari is currently being held at the Manila International Airport following an Iranian Interpol notice calling for her extradition, The Philippine Star newspaper reported. A senior Philippine official said that “the only reason she was held at the airport – and we really don’t call it detention – … is only because of that [Interpol] Red Notice issued against her.” There were no criminal cases against her in the country, the official added.

An Iranian beauty queen has requested asylum in the Philippines after an Interpol alert about her filed by Tehran got her detained at the Manila airport.

Bahareh Zare Bahari has been held at Ninoy Aquino International Airport’s Terminal 3 since October 17, as authorities examine Iran’s allegation that she assaulted a fellow Iranian in the Philippines and Bahari’s counter-claim that the Islamic Republic is targeting her for her political activism and that the charges against her are fake.

Bahari, who represented Iran at the 2018 Miss Intercontinental pageant in Manila and who has been studying dentistry in the Philippines since 2014, is an outspoken women’s rights advocate and a supporter of opposition activists in her country.

Earlier this year she angered Iran’s Islamist government by waving a photo of prominent government critic Reza Pahlavi at a pageant. Joining a beauty pageant is in itself frowned upon by the conservative religious leadership.

Various media outlets have quoted Bahari as saying that if she is deported to Iran in compliance with the Interpol Red Notice, “they will kill me.”

“I am against our government. The Iran government is terrorist. I always try to [give a] voice [to] my people on media,” she told The Philippine Star.

Since President Donald Trump withdrew from the Obama-backed nuclear deal in May 2018 and ramped up sanctions against Tehran, the regime has experienced a serious economic crisis and a surge in popular discontent. Major Iranian cities, including the capital Tehran, have seen massive protests, with workers demanding unpaid wages and women defying hijab laws. The Islamic regime unleashed the dreaded Islamic Revolutionary Guard Corps (IRGC) to crush these demonstrations, killing unarmed protesters.

While Iranian women were being tortured and jailed for defying the Sharia laws, Sweden’s self-styled “feminist government” dispatched an all-women trade delegation donning head scarfs to Iran. EU foreign affairs chief Federica Mogherini, who helped engineer the 2015 nuclear deal, has repeatedly worn a hijab during her talks with Iranian officials.

The U.S. and European women’s rights groups, vocal against “toxic masculinity” and “oppressive patriarchy” in the West, have largely stayed silent about the plight of Bahari and other Iranian women. The current crop of feminist activists are too busy chipping away at the moral foundations of the West. They hardly notice the plight of oppressed women in Iran and other Islamic countries. European feminists have been among the biggest supporters of the open border immigration policies that allow millions of male immigrants from Muslim-majority countries of the Middle East and North Africa, importing the regressive practices of female genital mutilation, child marriage, and honor killing to Europe.

If this woman is turned over to the Iranian government, the government will kill her.

Miss,
This is what you do. Go kick a cop in the groin. Leave your name and contact information. Then join a terrorist group. Fly to Mexico city, live it up. Then take a car or bus to the US border. State you are pregnant and ask for asylum. You will then be placed in a position of a super citizen of the US. You will have your college and your families college paid for, get a place to live, instant credit, monthly monetary assistance, health care. If you tell then that Trump is a bad orange man, you will be elected to the Senate. Your future is beyond bright.

Good opportunity for Trump to make a move and offer her asylum.

I bet the Philippines would like to wash their hands of this.

The only thing I remember that I agree with Hillary about

I wonder if she really meant it now. It was what drove me to consider her in 2007 at the time. I learned to be disgusted with her however in 2008. I think she lost her mind and made a pact with the devil, Obama…

No. They’ll beat, torture and rape her until she publicly apologizes for questioning the benevolent leaders of Iran.

THEN they’ll kill her.