To say Omar has a long and complicated relationship history is an understatement. 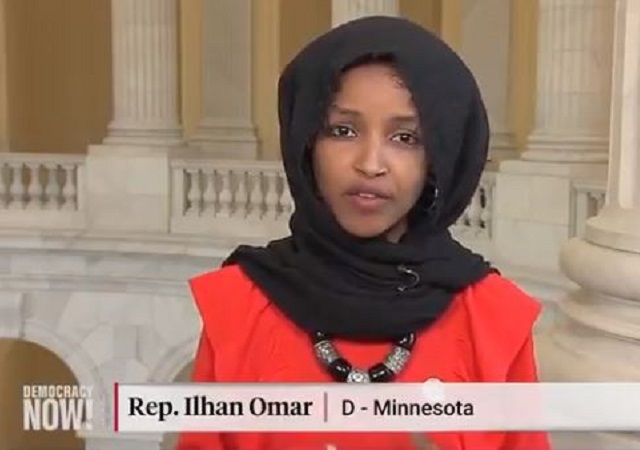 The rumors of a split began in August when a woman claimed Omar stole her husband.

Omar wrote in the papers “there’s been an ‘irretrievable breakdown of the marriage relationship.'” She requested legal and physical custody of the three children, no spousal support for either, and the court to decide child support.

“Ilhan has filed for divorce from her husband Ahmed. As with all marriages, this is intensely personal and a difficult time for their family. For years, Ilhan and Ahmed have been the object of speculation and inuendo from political opponents and the media. This has taken a significant toll on Ilhan, Ahmed, and their three children. Just like any other family navigating this kind of transition, Ilhan wishes to have their privacy respected for themselves and their children and will not be commenting any further,” Driggs said.

Her divorce adds another layer to her complicated history with her now estranged husband, Hirsi. They reportedly married in a religious ceremony in 2002 — but the union was not recognized legally. The couple had 2 children together, but separated in 2008.

She went on to marry another man named Ahmed — British citizen Ahmed Elmi — in Minneapolis in 2009, and this time it was official with legal docs and everything. However, they reportedly split in 2011 and he returned to the UK … but they weren’t legally divorced until 2017.

Meanwhile, Oman reconciled with Hirsi in 2012 and they had another child together … while she was still legally married to Elmi.

Now, they’re headed for an official divorce. The Congresswoman has reportedly moved out of their place and into a penthouse apartment in Minneapolis.

In June, Omar had to repay thousands of dollars in taxes after she filed “joint married tax returns with one man while legally married to another.”

The Minnesota Campaign Finance and Public Disclosure Board accused Omar and Hirsi of filing joint tax returns in 2014 and 2015. She was still legally married to Elmi at that time even though they split in 2011.

Besides that technicality, Minnesota does not allow people in common-law marriages to file joint tax returns. Plus it is against federal and state law to file joint taxes with someone who is not your legal spouse.

Rumors swirled in the beginning of August of Omar “dining and holding hands with a mystery man at a secluded restaurant outside of Los Angeles back in March.” The Daily Mail revealed the man as Tim Mynett. A source told the publication that Omar “has been carrying on with Mynett, 38, a campaign fundraising strategist, for several months.”

A few weeks later, Dr. Beth Jordan Mynett filed for divorce. She claimed Omar stole her husband because Tim admitted to her back in April “he was romantically involved with and in love with another woman, Ilhan Omar.”

Dr. Mynett wants primary physical custody of their son due to Mynett’s constant travel with Omar. The papers state that Mynett’s “more recent travel and long work hours now appear to be more related to his affair with Rep. Omar than with his actual work commitments.”

In the past three weeks I have circled back to interview sources whom I have found to be highly reliable in the Omar saga. They open a window onto the scandals from the perspective of Ahmed Hirsi, her long-time partner and the father of her three children. According to sources, Hirsi is telling friends:

• that he will not go to jail for Omar;

• that while Omar did indeed marry her brother (Ahmed Elmi) for fraudulent purposes, Hirsi did not know at the time that she had married Elmi;

• that Omar is threatening Hirsi he would be in trouble along with her if the truth were to come out;

• that Omar has asked him to state publicly that all is well with their marriage even though it is completely done and finished; and

• that in fact they are living apart and have been divorced under Islamic law (although they remain legally married).

But what about her Brother-Husband?????

“Ilhan Omar, Currently Carrying on An Expensive and Very Public Affair with Her Kufir Consultant, Files for Divorce, Blaming (Of Course!) The Conservative Media and Political Foes for Her Marital Problems

I think another problem might be when she married her flamboyantly gay brother but continued living with both her husbands in the same house, and then started getting…”

carabec in reply to notamemberofanyorganizedpolicital. | October 8, 2019 at 9:10 am

Her Chickens are coming home to Roost!

She is difficult to get along with?

I am sure she is every man’s dream woman… or would that be nightmare?

I wonder how long it will be till she finds a new brother to marry.

Will there be a stoning involved afterwards since she is committing adultery?

I’ d like to know where and when the stoning will take place …. I want to corner the stone market. Seniors to get a discount. I’ll even bring a few goats to provide a realistic setting.

Your comment made me break out some vinyl and listen to Dylan’s “Everybody Must Get Stoned”. So this sordid little story does have a redeeming feature for me.

You get a thumbs up for record choice!

It is too far for me to attend but where can I send some rocks?

Looks like everybody screwed her and now she’s trying to screw us back.

What kind of loser leaves his wife for this … thing.

notamemberofanyorganizedpolicital in reply to beagleEar. | October 8, 2019 at 8:55 am

An ambitious and CORRUPT Loser, that’s who…….

Seriously, what is happening with investigations into the allegations of tax fraud, immigration fraud, bigamy, perjury????? Get on with the indictments!

i feel sorry for the other woman…

imagine going through life knowing your husband of many years left you for *that*.

The Congresswoman has reportedly moved out of their place and into a penthouse apartment in Minneapolis.

I wonder if it has a garbage disposal.

I understand they’re considered a bit exotic in some circles.

Omar is a hottie.

Crazy eyes trump any sort of hot you care to cite. And, no, i do not agree with your assessment.

Feel free to get in line. She doesn’t seem to have a very high opinion of either faithfulness or fidelity. She’s definitely not to my liking. I can’t hardly stand 5 minutes of listening to her on video so couldn’t begin to imagine having to live with her to listen to her even more.
I’m not crazy about mixed marriages, although that’s not my business & entirely between them, but there are some “women of color” I consider to be very beautiful. She is NOT one of them.

And in true Omar fashion, it’s someone else’s fault this happened..

Weird how she clings to that symbol of oppression on her head that would have her stoned to death for being an adulterer.

This fraudulent, adulterous, incestuous bigamist should be deported back to Somalia because of immigration fraud. Once back in Somalia, she can reclaim her civil rights that, she says, Muslims lost in America after 9/11.
This grifter is doing what Muslims do best, practice taqiyya before the infidel.

I object to reports of Omar’s affair being called a rumour. And didn’t her husband say she married her brother?

Some one said he did. And once he hangs himself … well, dead men tell no tales, etc.

Now that she’s divorcing her brother I guess they won’t both attend any family reunions?

How dare you racists judge this True American? She’s just as American as George Washington and Teddy Roosevelt combined.

You see it doesn’t matter how vile she is or how much she hates America once she has that magic piece of paper she is just as American as the scions of Thomas Jefferson. And there’s nothing you haters can do about it.

So keep importing people like her from places that make mad Max look like an ABC after-school special. Because America has magic dirt and everybody who’s a citizen is equally good and American as you. Deal with it.

The latest from Dearborn- schools to serve only halal meat:

Professor, what are the chances of parents suing and winning on this?

The city council has a large pile of rocks ready for just such an eventuality….

WHY is this FRAUD & CRIMINAL ALIEN still in our HOUSE?? If it were a NORMAL REAL AMERICAN. We would be out of the country or IN JAIL, VS an invader?

Maybe, she wants to give it another shot at keeping it in the family.