“Through volunteers in the community, we were able to connect with others and bring awareness and thank (Rockets general manager Daryl) Morey, who supported the movement.” 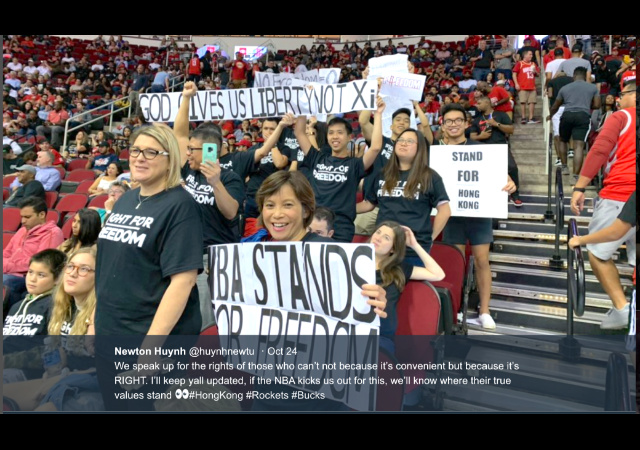 Houston Rockets general manager Daryl Morey rocked the NBA earlier this month in a now-deleted tweet when he voiced support for those in Hong Kong.

The tweet caused backlash in China, which led the NBA to fix its PR in the communist nation instead of backing one of their own.

Rockets fans, though, showed common sense during the home opener.

Even Rockets owner Tilman Fertitta criticized his GM. The NBA itself pushed aside Morey after it started to lose money:

The Chinese Basketball Association, headed by former Rockets star Yao Ming, suspended its ties to the Rockets over the tweet.

Events in China promoting a Lakers-Nets series were canceled, NBA media partner Tencent said it was evaluating its plans to cover the league and some Chinese corporations have suspended relationships with the NBA.

But we little people, even those of us who love capitalism and making money, know the truth about China. It’s an oppressive communist country that constantly abuses human rights across the board. It’s trying to keep an iron fist wrapped around Hong Kong.

Rockets fans showed Morey they have his back:

Wednesday’s opening-night games were not televised in China in the wake of Morey’s tweet that caused tension between the NBA and Chinese officials.

Many in the group wore black T-shirts with white letters that read: “Fight for Freedom.”

One man held a sign the read: “Thank you Morey,” with a red heart after Morey’s name. Another sign read: “No censorship in America” and a third declared: “Freedom is not FREE.” Another man held a sign that said: “Fight for freedom, stand with Hong Kong,” which are the exact words included in Morey’s tweet.

“We have been watching the Hong Kong protests the last four months. It’s sad to see,” said Tram Ho, a Houston physician who organized the display.

Ho, who is Vietnamese, said she spent six months as a refugee in Hong Kong between 1981 and 1982 before arriving in the United States. After watching a BBC report on last week’s demonstration in Brooklyn, she was inspired to do something similar in Houston.

“It brought me the idea that we should do the same thing, but I don’t have enough to pay for 300, so we bought 30 tickets,” she said with a laugh. “Through volunteers in the community, we were able to connect with others and bring awareness and thank (Rockets general manager Daryl) Morey, who supported the movement.”

We speak up for the rights of those who can’t not because it’s convenient but because it’s RIGHT. I’ll keep yall updated, if the NBA kicks us out for this, we’ll know where their true values stand ?#HongKong #Rockets #Bucks pic.twitter.com/ySEYH39ELL

Looks like some Supporters of Hong Kong at the Houston Rockets game: “Stand with Hong Kong” sign #NBA #milvshou pic.twitter.com/vk72BFucdP

Beautiful. So long as fans show up to the games and scatter these signs and t-shirts throughout the crowd, China either airs the games or cancels its contract with the NBA. The biggest loser of all is the NBA who also lose the respect and loyalty of its fans. Well played Commissioner Silver and greedy owners!

notamemberofanyorganizedpolicital in reply to Pasadena Phil. | October 26, 2019 at 2:56 pm

Methinks they can afford to to lose it.

Feel good story of the week.

notamemberofanyorganizedpolicital in reply to Tiki. | October 26, 2019 at 3:31 pm

I’m wondering though, how the Hong Kong protesters will ever know this USA protest is happening to the NBA and their Communist Chinese Owners?

Tiki in reply to notamemberofanyorganizedpolicital. | October 26, 2019 at 3:58 pm

Are NBA games uncensored in Honk Kong or do they watch the same feed as main land viewers? I really don’t know. But word does get out no matter what. I forget the translated term used by Chinese during the cultural revolution – but the phrase simply meant how information traveled the gossipy back road from Beijing to Shanghai faster than the official printed version appeared in the Daily Worker.

The situation seems ripe for unintended consequences. More than likely, China will bitch at the NBA who will then bitch at the owners who will then crack down on displays at the games. But then one has the opposite force, starting with the fans who may stop buying tickets for games, which pressures the owners, who then pressure the league, who then decides the China market might not be worth it. How do they say it? Better is the natural enemy of good-enough.

In the case of baseball, for me, I have watched a total of 4 or 5 innings this entire year, and only while in brew pubs this last week when they were running the $5 nacho specials around town. And that is from them dis’n my man Pete. College hoops id different, but I can you that it didn’t take much for me to not watch pro sports. I am guessing that the China thing is such a big deal because the NBA, etc, are losing their American audiences in droves. We aren’t in the days of 3 channels anymore.