“She was aware of his spiraling depression and suicidal thoughts brought on by her abuse, yet she persisted, continuing to encourage him to take his own life” 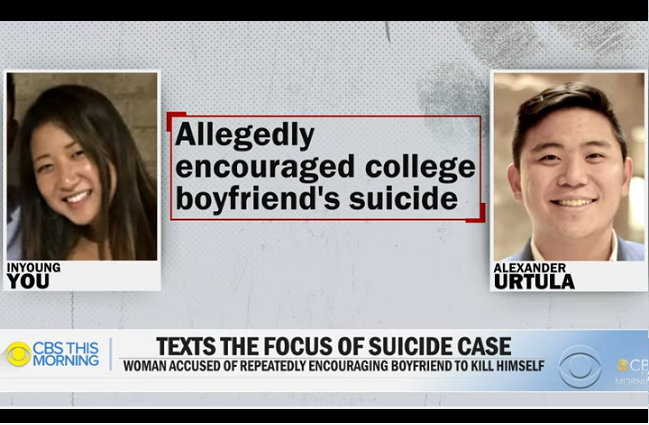 Alexander Urtula, 22, committed suicide on May 20, 2019, just hours before he was to graduate from Boston College.  His girlfriend—Inyoung You, 21, of South Korea—has been indicted for involuntary manslaughter in his death.

You allegedly sent Urtula 47,000 text messages in the months prior to his death and often included sentiments like “go die” and “go kill yourself.”

A former Boston College student who police say sent her boyfriend more than 780 text messages a day — many telling him to “go die” and “go kill” himself — has been charged with manslaughter after 22-year-old Alexander Urtula committed suicide just two hours before he was set to graduate from BC.

Suffolk District Attorney Rachael Rollins said Monday that Inyoung You, 21, of South Korea, is charged with involuntary manslaughter for her role in Urtula’s death. The biology major from New Jersey jumped from the top of the Renaissance parking garage in Roxbury on May 20.

“You’s behavior was wanton and reckless and resulted in overwhelming Mr. Urtula’s will to live,” Rollins said in a press conference.

Police determined You was “physically, verbally and psychologically abusive” toward Urtula after an investigation of his phone following his death, Rollins said. The couple exchanged more than 75,000 text messages — 47,000 from You — in the two months leading up to the suicide where You allegedly told her boyfriend to “go die” and to “kill himself” thousands of times, Rollins said.

. . . . You would frequently track Urtula’s location using her cell phone and stalked him to the parking garage on the morning of his death, Rollins said. She was there that morning when Urtula leapt from the top of the parking structure.

Not only was she allegedly present when Urtula leapt to his death, but she is accused of manipulating him because she reportedly knew he suffered from “spiraling depression.”  She reportedly told him that she, his family, and the world would be better off with him.

Rollins said the abuse was witnessed by family and classmates of both parties and was also documented in the victim’s journal entries.

Text messages between the couple also documented the imbalance in the couple’s power dynamic, with You understanding she had “complete and total control over Mr. Urtula, both mentally and emotionally,” Rollins said. The defendant used threats of self-harm and manipulation to control the victim.

In the 75,000 text messages between the couple in the months before his death — more than 47,000 of those from You — the defendant repeatedly told Urtula to “go die” or to “go kill himself,” Rollins said. The texts said that she, his family and the world would be better off without him.

“She was aware of his spiraling depression and suicidal thoughts brought on by her abuse, yet she persisted, continuing to encourage him to take his own life,” Rollins said.

In addition to the demeaning words, You allegedly isolated Urtula from his loved ones and frequently tracked his location on her phone.

You returned to South Korea, and an arraignment has been scheduled.

You, who was an economics major set to graduate from Boston College next May, withdrew from classes in August, the college confirmed.

You returned to South Korea following Urtula’s death and authorities said they are “cautiously optimistic” that she will willingly return to the U.S. to face charges. Rollins said her office is also prepared to pursue extradition.

An arraignment had not been scheduled.

47,000 messages telling him to kill himself? Tracking his location? I don’t know if this warrants involuntary manslaughter charges, but it sure sounds like stalking.

Regardless, the ex-girlfriend is one sick puppy.

All he needed to do was block her number, These are BS charges.

There are also allegations of physical abuse. Perhaps he could block her number but they went to the same college and BC is not that big. In fact the campus is relatively small. There is no way he could easily escape a psycho like this.

Do the math, she roughly sent him a text every waking minute of every day for 2 months straight.
red

And we do have an electronic stalking law on the books in MA.

Note, however, this DA is the one who has a list of 57 crimes that she refuses to prosecute, including shoplifting items worth less than (I believe) $750, drug dealing, resisting arrest and disorderly conduct.

A lot of anti-Trump people should be very very nervous is this is the new law.

75,000 text messages? How did they sleep and eat in that time? Separately, I’m a big believer in free will. Mr. Urtula always had the opportunity to separate himself from Ms. You. He chose not to, so his death is on him, not her, although, I will add that she was unusually cruel.

Did he really have the opportunity to “separate” himself? BC is a small campus. Do you think she wouldn’t have stalked him physically? Was he supposed to transfer during his senior year.

They both had mental health issues but she most definitely played a significant role in his death.

Calling this woman the deceased’s “girlfriend” might be putting a bit of a strain on the English language.

It seems like an unobvious extension of the laws, so not a good idea. You’ve got to know what’s illegal or everybody’s cowering in fear, especially as regards speech.

As I understand it, the 1st Ammendment is to protect debate of policy, and discussion out side of that, if there is sufficient compelling reason, can be restricted.

While I can agree, saying something stupidly cruel should be legal, this appears to go we’ll beyond a unthinking monent. I’m inclined to agree that this should be prosecuted as the level that it is right now, but that it should also be narrowly interpreted.

I wouldn’t be surprised if this one does go to the Supreme Court if she is convicted though.

Coersion and threats are not “free speech”.

AOC graduated from BU with a worthless degree in economics. She makes a fine poster girl for BU’s econ program.

She must have studied mixology on the side … in between her Marxist electives.

This took place at Boston COLLEGE, not BU.

BC and BU: The C and U are 90 degrees from each other, so it confuses some people.

I wish I could up thumb that twice, since it took me twice reading to get what you meant.

Completely agree with the charge. The young man was of diminished cognition, due to major depression. If she had done this to a child, it would be considered child abuse, and she would be guilty of involuntary manslaughter. If to a senior, it would be considered elder abuse, and again be involuntary manslaughter. This is not a free speech issue, rather an issue of the CONSEQUENCES of said speech – equivalent to the old “crying fire in a crowded theater.”.

The sentence will probably be no more than 10 years in prison. Unfortunately.

This woman sounds like an incredibly vile person whether a charge of involuntary manslaughter is overkill or not. I hope that word of this gets around and she starts having trouble finding a new boyfriend, because she sounds like a sociopath.

I can think of a number of people that I would like to introduce her to, just sayin. That being said, isn’t this an issue of say “aiding and abetting” (I went to the Perry Mason Law School) at a bare minimum.

Regardless, it seems that just about every part of this story has a foot in a gray area. For instance, what was his responsibility in obtaining a restaining order? If that had been done, we might have avoided this outcome, or, the charges against her would be more solidly based than an exceptional case of “she’s a B1tch.” I have had the opportunity to talk with a lifetime’s worth of individuals who claimed to be stuck in bad relationships. For some, it seemed like being in a bad relationship was as natural them as breathing is to us. And of course, they act like magnets to abusive people in order to get that need met. But the issue here is assigning the appropriate blame, which is hard to do in cases of mental illness. I don’t want to be victim blaming here, but the victim and/or his family do bear some responsibility for this outcome if they did not act according to what the situation required. On the other hand, I have also learned that it is impossible to protect some people from making bad decisions. As I said, gray gray gray. The best outcome is that we don’t try to solve this situation with a cure that proves to be worse than the disease itself.

I once had a girlfriend who tried to manipulate me with threats of harming herself. It was tiresome listening to such threats, which I did not take seriously. Maybe I said something like “go ahead and kill yourself.” Now, I was not sending her 800 text messages a day. But I did tell her to go ahead.

I do not feel that I was committing a crime.

Note, the guy was responding to her 800 text messages a day — he was not blocking her, he was fully engaged.

I do not see any crime here. Of course, I have not seen the content of their insane exchanges. Insane just based on volume, not on content.

I don’t think your situation would have been the same.

I agree with you. Most people at one time or another have told someone to go ahead and do something that was stupid or harmful. Sometimes out of frustration or anger. This appears to have been a rather crazy relationship on both sides. If blame for his death has to be assigned then everyone who knew he was depressed should be charged.