“We are not animal abusers and environment polluters. We have a heart for our businesses.” 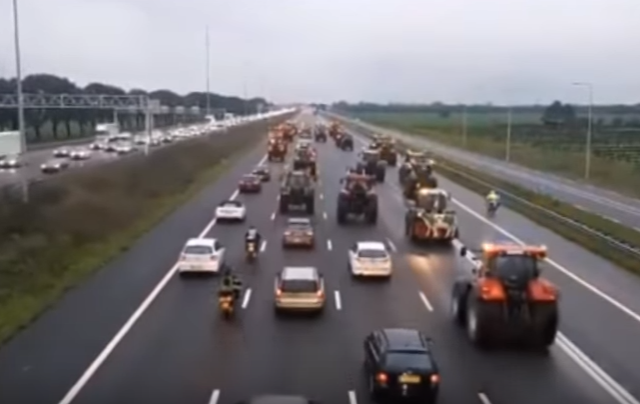 Friday, I covered the story of angry Londoners who pulled environmental activists who caused significant delays during the morning commute off the roof of a train in the city’s underground system.

Across the English Channel, hundreds of tractor-driving Dutch farmers poured into the town of De Bilt to protest government moves to rein in carbon and nitrogen emissions based on “climate change” policies.

Instead of just targeting carbon, the Netherlands’ eco-warriors are also going after nitrogen emissions.

It was the second major protest this month by Dutch farmers who say the government is unfairly targeting them as it seeks to slash emissions.

“They blame agriculture for everything at the moment because of nitrogen emissions,” said farmer Jans de Wilcher.

He added that “we as a sector store far more nitrogen than we produce. So we are actually helping the Dutch problem rather than making it worse — so why do we get the blame?”

Hundreds of drivers on tractors gathered in the central town of De Bilt to protest near the headquarters of the National Institute for Public Health and the Environment, which is responsible for measuring nitrogen emissions.

Many of have noticed the targeting of our ranchers and non-approved food producers in this country. The farmers in the Netherlands are also being targeted by their nation’s green justice policies.

Protesters say their industry is being unfairly singled out for nitrogen emissions that pollute the environment.

They also sought to counter the “negative image” farming and farmers have in the Netherlands.

“We are not animal abusers and environment polluters. We have a heart for our businesses,” organizers wrote on one of the protests’ websites.

The role of farming and sustainability has recently become a hot topic in Dutch politics.

“This is about our families, our future, the future of our children. It’s about our way of life,” sheep farmer and one of the protest’s organizers Bart Kemp told the crowd gathered in The Hague.

To date, the government has not taken steps against farmers, but at least one political party has suggested that the Netherlands move to reduce the number of live animals its farmers keep.

Another plan would grant financial aid to farmers who cease their operations or adopt more sustainable agriculture practices.

On social media, a Dutch social media analyst named Detgrim, has a rolling thread that covers the evolution of the farmers’ demonstrations and the public support it has received.

This day had been in the books of farmers for a while, but little attention was paid to it by the media. Most normies, including me, didn’t know a large scale protest was coming until a morning traffic record was already broken.

Tractors on all highways. pic.twitter.com/PnNb9B3ofi

Inbetween the first day and 14 october various smaller scale protests happened, but on the 14th the farmers again went out in larger numbers.

This time the goal was occupying the provincial houses, in an attempt to repeal the laws. pic.twitter.com/SW22gU9DHa

In fact, people around the country came to watch the farmers drive by and cheered them on. pic.twitter.com/89Voif2bBE

Once again the farmers rammed on the Malieveld. It was clear that the people were behind them except left wing urbanites. No real change was made that day, but a lot of sympathy was shown and gained.

I hope that these EU “deplorables” will continue to robustly fight against the green justice warriors and the climate alarmist policies they wish to enact.

When I was a child we worried about polio, nuclear obliteration, measles, scarlet fever. Air conditioning was a rarity.

To the climate alarmists (Chicken Little Brigade of the Socialist Party) on demand electric power is a great achievement. Worry about real things or you risk like California screwing up the progress we have made in the last 100 years.

As I say to my California friends, when you shout you emit more C02. Just breath slowly, don’t shout — and hope they left does not embrace post par tum abortion to cut down on C02 emissions.

notamemberofanyorganizedpolicital in reply to clerk. | October 19, 2019 at 5:27 pm

and maybe tell them….

The Climate Alarmism religion reads like a heather version of Jonathan Edwards 18th Century Sermon <a href="https://www.blueletterbible.org/Comm/edwards_jonathan/Sermons/Sinners.cfm"SINNERS IN THE HANDS OF AN ANGRY GOD

You will find your *real* environmentalists among the farmers, the ones who plant windbreaks, wildlife food plots for deer and quail, work their hardest to keep every pinch of soil on the ground where it can provide crops instead of washing downstream. Good farmers can have the most beautiful farms ever.

Carlyle in Sartor Resartus commented on the sad state of Dutch cows wrapped in burlap in the rain. It’s probably the same today.