Clearly, the only things that have gone extinct in this movement are responsible adults. 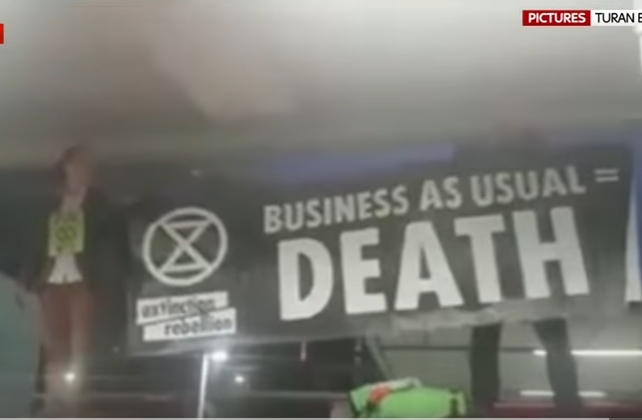 Last week, I covered the antics of a green justice cult called “Extinction Rebellion”. These eco-warriors have planned 2 weeks of protests and disruptions at major cities around the world.

This week, Londoners seem to have had quite enough of the hypocritical preaching. Commuters clashed with climate activists who tried to disrupt travel during peak rush hour by hoping on roof the underground trains.

The commuters, frustrated at the delays, jumped on top of the train and dragged the demonstrators off.

A bearded man wearing a suit walks on the roof of a London Underground train as a crowd of clearly infuriated commuters yell and point at him.

A few seconds later, another man leaps up and grabs his legs as the protester tries to kick him off. They both fall, and the protester is buried among the angry mob, who seem to attack him on the floor.

Video of Thursday morning’s episode in eastern London, which was circulated widely, illustrated the complicated passions that have been ignited by protests in the British capital by Extinction Rebellion, a group of environmental activists who employ radical disruptive tactics to draw attention to the climate crisis.

I offer you the feel-good video of the week.

Extinction Rebellion leaders are rethinking their current strategies, which don’t seem to be inspiring the masses in the ways that the eco-activists were planning.

The group’s leaders have called off a planned protest at Gatwick airport ‘in light of’ the response to the Tube disruption and a spokesman said the group would ‘take stock’ before disrupting the Underground any further.

In a statement Extinction Rebellion acknowledged one of their own protesters had turned violent this morning.

XR said: ‘We are aware that one of our activists responded in self defence in a moment of panic when confronted by a threatening situation. He acknowledges his accountability for this action and we offer gratitude for members of the public who helped to protect him.’

Extinction Rebellion (XR) campaigners were told to leave Trafalgar Square, where many had been congregating lawfully since last week, as police seeks to limit disruption to public transport and spaces.

More than 1,600 people have been arrested during the nine days of protests. Officers have threatened that anyone who defies police orders will also be detained.

Child climate alarmist Greta Thunberg has told the green justice cultists that they should consider breaking the law so they can continue their antics.

She said: “If standing up against the climate and ecological breakdown and for humanity is against the rules then the rules must be broken.”

Clearly, the only things that have gone extinct in this movement are responsible adults.

Now, that is a climatic change in attitude I can get behind!

“A few seconds later, another man leaps up and grabs his legs as the protester tries to kick him off. They both fall, and the protester is buried among the angry mob, who seem to attack him on the floor.”

It looks like a scene straight out of A Clockwork Orange.

Yeah just watch an extended version on youtube……the bald guy gets yank off an appears to get his azz kicked, never saw what happened to the other guy, but later the crowd went after the guys that were there to film the protest….If more acts like this were treated in the same way, we would have less of it going on.

as I said on another site….

Start the train down the tracks, if they are too dumb to jump off….F’em, they didn’t need to procreate.

they can rebel against their extinction but their tactics will LEAD to it….

The one that I laughed hardest st was the paralympian geezer who climbed up in to an aircraft at London City Airport.

Obviously he wasnt so disabled he could climb on top of the plane! Probably needs his disablement eligibility for the Paralympics reviewed.

Irony, a visit to the ER.

Having watched several videos from the morning the protesters are probably lucky to be alive given how mich they had fucked off the mob.

Legislators need to create a new crime called “deliberate disruption” so that police don’t have to go through the protocols of ordering the crowd to disperse etc before finally arresting disrupters 45 minutes later.

You climb up on a train with a sign — immediate arrest.

I prefer the citizens deal with it. Directly.

These people are idiots and cultists. And they should be dealt with like this every single time they disrupt Normals’ lives.

The people interviewed were either way too nice or girly men

here’s another feel good movie from right here in the states:

definitely NSFW (F-bombs in the video)

LOL. That made my morning. I saw a lot of me in that angry dude. So sick of this crap and the people that just sit back and take it.

Is this what you Brits call a public “ruction”? I like it. It’s a good start.

People who block traffic, stop trains from running on time and the like, need to be personally sued for all lost wages, all lost commerce and all extra associated governmental costs. They also need to be charged with false imprisonment or the equivalent jurisdictional statute, along with federal civil rights violations. This is in no way protest, this is criminality.

I was reading an article the other day (I can’t remember the name or I would link it).

But they were talking about the current state of the ‘social contract’. This is a term that is BADLY mangled and misused by progressives.

But at its core, the social contract is an understanding that the laws will be enforced faithfully. People can deal with police not being able to be everywhere at once and prevent every crime. But as long as they see good-faith effort, they believe in law and order, and are generally peaceful.

The social contract breaks down when people see police UNWILLING to enforce the law, as we see here. People see the police visiting houses for saying mean things on Twitter (this IS NOT an exaggeration – they are literally doing this in London), and sitting around with their thumbs up their asses as so-called ‘protesters’ block off tens of thousands of people being able to go about their lives.

This is a very, VERY dangerous place to be as a society.

1) People start enforcing their own justice, and it gets violent VERY quickly

The protests are symptom of a police force that is totally neutered from actually enforcing laws that people want enforced, while trying to bully people for political opinions.

In a way, it is a social contract of civilized men. When criminals attack civilization, men of honor stand up to defend the order which they have been a part of creating.

Or when some (censored) climbs up on top of your tube car and (censored) up your commute to your job, it peaves you off enough to pull the (censored) down and give him a good boot in the ribs for being a (censored).

Think of it as encouraging civilized behavior. Stand there, shout your little chants, wave your flags, and don’t be a (censored).

Well, well, well. The rest of the world finally understands why the USA used to have lynch law; only I fear we’ll have it again.

This is surprising. I would expect that in London’s current state of decay, the Peelers would be arresting the impromptu vigilantes, thereby giving the disruptive protesters free reign to scramble up society, suffragette-style. The idea of the police doing anything to enforce sensible law & order just seems so un-British.

Now, if the Brits will start doing this to musselmen squatting on their streets and sidewalks and raping their teen girls by the thousands.

If these emasculated Brits showed a scintilla of the same gumption and backbone in dealing with Islamic supremacism, totalitarianism and belligerence, as they did in dealing with the Leftist agitators in this incident, the U.K. might yet be saved. As things currently stand, though, there is no hope for this once-great and proud country.