Harris is attempting to jump-start her campaign by calling on Twitter to suspend Trump’s account, and making some senior staff moves. Will her latest round of stunts work? 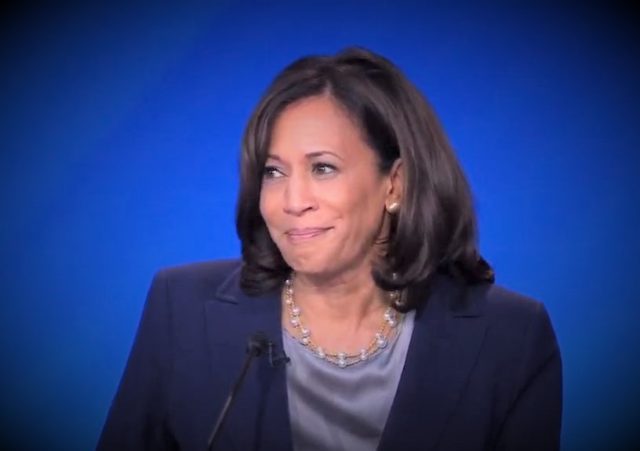 What do you do when you’ve had two bad debates in a row and your campaign has been in a freefall for months?

Increasingly desperate things to try and regain relevance, just as Sen. Kamala Harris has done over the last several weeks.

Harris quickly jumped on board impeaching President Trump over reports about the July phone call he had with Ukrainian President Zelensky before the transcript of the call was even released.

Last week she called for a formal impeachment inquiry on Supreme Court Justice Brett Kavanaugh based on another flimsily sourced sexual assault allegation reported in the New York Times.

Now Harris has demanded Twitter suspend Trump’s account. She alleged his comments about the so-called whistleblower and certain members of Congress (read: the Squad) “could result in harm to other people:”

“The President’s tweets and his behaviors about this are just further evidence of the fact that he uses his power in a way that is designed to beat people down instead of lift people up,” the 2020 Democratic presidential candidate told CNN.

“Frankly, when you look at what he’s been tweeting today directed at the whistleblower, directed at so many people, you know, I, frankly, think that based on this and all we’ve seen him do before, including attacking members of Congress, that he, frankly, should be — his Twitter account should be suspended.”

Harris said Trump’s latest tweets, in which he called the whistleblower “close to a spy,” is evidence that he is “irresponsible with his words in a way that could result in harm to other people.”

The words of a president matter. Trump has again shown he is irresponsible and endangering others with his tweets. He should lose the privilege to be on Twitter. pic.twitter.com/t2w8cw3uZW

Hey, @jack. Time to do something about this. https://t.co/es2fJ5PNRV

She tripled down earlier today, formally asking Dorsey in a letter to suspend Trump:

“Kamala is seriously suggesting Twitter censor the United States President simply because she disagrees. This is how insane the Democratic Party has become,” Trump 2020 advisory board member Jenna Ellis Rives tweeted in response.

All of this comes in the midst of a Politico story on Harris attempting to jump-start her campaign by making some senior staff moves. They also reported on some of the problems that have allegedly been plaguing the campaign:

Behind the scenes, aides said a lack of clarity among staff surrounding the roles of Campaign Manager Juan Rodriguez and Campaign Chair Maya Harris, the candidate’s sister, and inexperience across the organization are feeding a growing sense of indecision and aimlessness inside the campaign.

The California senator has decided to elevate her Senate Chief of Staff Rohini Kosoglu and senior adviser Laphonza Butler into new senior management positions in the campaign, including discussions about installing the pair as dual deputy campaign managers, sources with direct knowledge of the arrangement told POLITICO.

The campaign did not start holding regular senior staff meetings until September — nine months after launching — leading to a lack of coordination across departments. At one point, aides said, Harris hired executive coaches for senior campaign management to cope with the problems — a move viewed internally as a recognition of their collective inexperience.

Aides point to scheduling bottlenecks occurring among the campaign’s three top inside decision-makers: Rodriguez, Maya Harris and Harris, who has a reputation as a micromanager.

Harris’ campaign was rattled by the leaked report, first published by Politico, that the campaign plans to restructure its senior leadership, prompting a flurry of calls and emails from managers to their subordinates Monday night aimed at calming raw nerves among rank-and-file staff.

A person familiar with the dynamic of the campaign described the mood as dark in recent days as Harris’ poll numbers in several national and statewide polls have shown the senator in the low single digits and falling.

In spite of her falling poll numbers and campaign restructuring, which now have her in the second tier of candidates, Harris insisted during her interview with Cooper that she remains a top tier candidate:

“I haven’t read the [Politico] article, Anderson. I can’t tell you what the article says,” Harris said. “We accomplished a great amount of work thus far which makes me a top-tier candidate and by many accounts within the top four, maybe five, but top four in a field of over 20 people.”

Her spin here is pretty incredible:

Sen. Kamala Harris: "We have accomplished a great amount of work thus far which makes me a top tier candidate, and by many accounts within the top 4, maybe 5, but top 4 in a field of over 20 people. So something's been going right." pic.twitter.com/BZ41b6r7i8

Harris at this point is a “top tier” candidate only in her own mind.

She had a decent fundraising haul last quarter, but all the money in the world won’t help her if she can’t motivate voters to enthusiastically support her campaign – and stick with it.

The fourth Democratic debate will be held in two weeks. It’ll be on one stage. Her nemesis Rep. Tulsi Gabbard will be there.

Harris will need to pull off a miracle performance in order to flip the script and move the support needle in the right direction. I don’t see it happening, though.

This flabbergasted me. I fully expected Harris to be the Democrat nominee, since it would allow Democrats to play both the race and gender cards against Trump.

Right now it looks like Warren will be the nominee, which will still allow Democrats to play the gender card.

Kamala looks like she’s going to be the Scott Walker of the 2020 race: looked great on paper, collapsed completely as soon as the real campaign started.

Give Tulsi Gabbard the credit for destroying Harris in that debate. It wasn’t just what Tulsi said about Harris laughing about sending black men to prison for minor crimes; it was the fact that Harris has never come up with a decent response to what was said. And she can’t, because it’s true.

It didn’t help that Harris has been trying to present herself as a black candidate, when it turns out that she’s the only certified descendant of slavemasters in the entire field, on either side.

WTH are you talking about? Her father is black.

Take a close look at Kamala’s Jamaican father. He’s at most 50% Black. That means his constitutionally unqualified natural born Jamaican daughter is at most 25% Black (just twice that of the White Hispanic, George Zimmerman).

Like the 50% Black Obama, Kamala, despite having intelligent parents, is not very bright, and she knew more doors would open to her if she played up her minority Black genome. To gain her street cred she engaged in an open adulterous affair with Willie Brown (who does not seem to remember her fondly), which also allowed her to fornicate her way to the top stratum of the California Dem Party and land her the state AG office then a US Senate seat. On a national stage she comes off as a ditzy shrew and inauthentically Black (the latter her dad called her out on publicly).

Buttitchitch is more likely to rally Blacks to his campaign than is faux Black Kamala.

One drop of black blood, right?

She’s not an American.
She ain’t African either.

She’s not an African American then.

When does Clinton ride to the rescue?

Sorry about the down thats a computer for you. I want to comment I see the same thing that the WITCH is just biding her time.

I almost feel sorry for Willie.

Just saw this over at Ace of Spades speculating that Hillary! will run for President:

This would put Democrats in a serious bind. For three years they have been saying that Hillary! had the election stolen from Her, and that Trump is not the legitimate President (they are currently impeaching him for … something). If Hillary! runs how could Democrat’s deny Her the nomination? Wouldn’t that make Democrats Putin’s and Trump’s stooges? You can bet if She runs She will point out how every Democrat believers her to be the real President.

I think impeaching Trump for not being the legitimate President while at the same time denying Hillary! the chance to claim the office which is rightfully Hers would be quite an exercise in totalitarian chutzpah – even for Democrats!

Maybe they can bring back Al Gore too, after all the election was stolen from him in 2000. And isn’t Jimmy Carter still eligible for one term?

What a joke these people are.

Warm those knee pads up darling.

This is the best of the DNC bigot party. I hope that map Trump uses is correct.

Put a dick in it, harris.

Ms. Harris will streamline government by reducing the number of silly constitutional amendments starting with the first and second.

And all of those counterrevolutionaries would not be allowed to tweet from their re-education camps. She would be such a wonderful dictator.

Kamala Harris was deeply involved in bringing the Blasey-Ford testimony to the Kavanaugh hearing. Because she is a trial attorney, she had to know that Blasey-Ford’s “testimony” had been stripped of all corroboratable fact.

The alleged Complaint in the Trump Phone Call was also stripped of facts, to the point that it was presented as wholly hearsay. And then the rules for such Complaints were changed to allow it to surface.

Both incidents suggest a common mode of thinking: strip out anything verifiable from the allegations, and then have someone who should know better declare them “credible.”

Did she have anything to do with the alleged Complaint?

Pelosi’s latest claim for the reason for impeachment is to protect the Constitution! Let
s look at some of the Constitutional programs proposed by the left.
1. Confiscate all guns that hold over 10 rounds and are scary to
look at.
2. No protection of our borders.
3. Stop any speech that the left does not agree with and calls
hate speech.
4. Free medical care for illegals.
5. Impose a public healthcare system on the people without a
vote.
6. Create a “Wealth Tax”.
7. Spy on Americans using government agencies.

Rohini Kosoglu and Laphonza Butler? Those sound like made-up names on spam e-mail.

Is there any doubt what these two leading progressives on the Democrat bench would do to the rest of Americans?

Deplatform, perchance to abort… I mean, cancel. Speaking truth to the communist-fascist-socialist axis.

She was great, till people saw her against the other leftists running in this clown car for the nomination, they saw a woman who was among the worse of all those clowns. That is truly sad. She can’t even stand out in a field of weeds.

Her only qualification,if one can call it that,is that of being Willie Browns willie receptacle.

She’s got a long journey ahead of her – recovering from overuse of her knees without using knee pads.

Why Knee Pads Are Essential for Work:
https://tilersplace.com/why-knee-pads-are-essential-function-knee/