The buffalo are roaming, the ozone hole is repairing, the planet is greener everywhere but Greenland, and “Extinction Rebellion” is protesting Google. 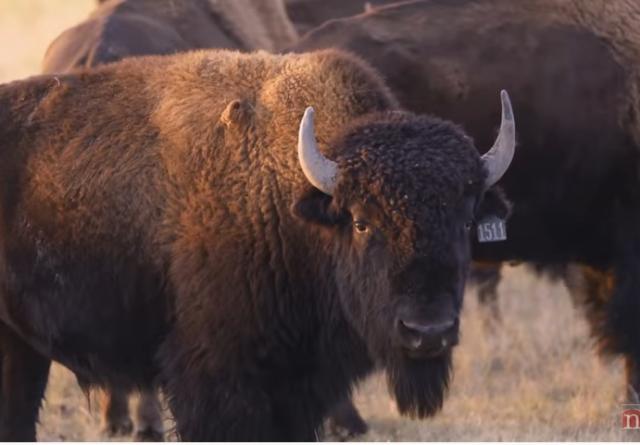 A series of news reports seem to give evidence that global conditions are getting increasingly better, which should bring climate alarmists, green justice warriors, and Extinction Rebellion cultists cause to celebrate.

To begin with, the American bison (i.e., buffalo) were on the verge of actual extinction. Now, their herds have increased to the point officials have reintroduced the animal to an area of the Badlands National Park area. Those will be the first bison in that area in about 150 years.

For the first time in nearly 150 years, bison will roam a new corner of a South Dakota national park. It’s a vital step in growing the population of America’s national mammal.

Badlands National Park officials released four bison into a newly expanded range on Friday. And if the way they careened out of their trailer onto the snow-covered plains is any indication, it seems the bison immediately made themselves at home.

The new real estate came from a land swap with a local ranch that blocked bison from entering the less rugged side of the park. Park officials worked with the US Forest Service and World Wildlife Fund among others to secure the additional 22,000 acres of land in 2014, according to the National Park Foundation.

Remember the dire predictions that the hole on the ozone layer, caused by chlorofluorocarbons (CFCs) in our hairsprays and cooling units, was going to kill us? The 1980’s panic led to the 1987 Montreal Protocol limiting the use of CFCs substantially.

The ozone layer, which protects us from ultraviolet light, looks to be successfully healing after gaping holes were discovered in the 1980s.

The Northern Hemisphere could be fully fixed by the 2030s and Antarctica by the 2060s.

Next, NASA is reporting that the Earth is getting substantially greener.

NASA has some good news, the world is a greener place today than it was 20 years ago. What prompted the change? Well, it appears China and India can take the majority of the credit.

In contrast to the perception of China and India’s willingness to overexploit land, water and resources for economic gain, the countries are responsible for the largest greening of the planet in the past two decades. The two most populous countries have implemented ambitious tree planting programs and scaled up their implementation and technology around agriculture.

Finally, on October 15, the climate news was all about the Greenland glaciers melting because of warming oceans. The same day, an analysis was published indicating that extreme snowfall event last year in northeast Greenland resulted in a major reproductive failure.

Now, the catchphrase may end up being “climate variability.”

The Arctic was subjected to a large amount of snow in 2018, which didn’t melt until late summer. In the journal PLOS Biology, researchers examined the consequences of this incident by comparing the more extreme year to the previous two decades.

…Although the impact of longer-term change is well-documented, researchers know much less about how climate variability and extreme weather events affect the Arctic.

This potpourri of good news needs a dash of schadenfreude. In this case, the “Extinction Rebellion” crew is protesting one of the biggest proponents of green justice inanity: Google.

Nursing mothers and youths blockaded Google’s London headquarters on Wednesday in protest at the company’s funding of climate deniers, as Extinction Rebellion defied a police order by continuing to stage actions in the capital.

A Guardian investigation revealed last week that Google had made “substantial” contributions to some of the most notorious climate deniers in Washington, despite its insistence that it supports action on the climate emergency.

Buffalo flatulence caused all the global warming. Greenland wasn’t melting 150 years ago when we only had 350 of those four legged walking steak and burgers

You know, your problem is you are too rational and factual. It is guys like you that are determined to ruin the Global Hysteria movement.

Why can’t you just reject reality and reason like everyone on the left so you get in step with the misanthropic crowd ending human domination of the planet in our lifetime?

We only have twelve precious years to accomplish this, you know!

notamemberofanyorganizedpolicital in reply to legacyrepublican. | October 18, 2019 at 11:09 am

As I’ve heard all my life: “If you don’t like the weather (climate) just wait a minute.”

This Globalist Climate Change POWER GRAB should be crammed in their…..

a slight correction sir. i believe the un report came out this time last year. so, we really only have 11 years to go.

Yes, bison return to the lands of their origin. We’re all so proud. Except for the cattle producers, who have literally spent *billions* of dollars over decades trying to wipe out brucellosis, a nasty disease that causes spontaneous abortions in cattle (and rarely humans). The lone pockets of the disease left is (drumroll please) Yellowstone bison and elk populations.

Bison are raised commercially, and with the exception you noted, treated pretty much the same as cattle.

So now the rationale cited to take over all societies, confiscate all private property, depopulate the world and turn all but a few hundred thousand of the annointed elite into serfs living in caves is now to be known as climate variability?

Ha ha ha ha ha ha….That’s what climate freaking does!! All the time, everyday for over 4 billion years. Stop wasting my time morons.

Don’t worry, if that one fails they’ll find another one. The excuse isn’t what matters, only the goal.

how about they call it climate viability.

As with all of these commie social causes, it’s about the permanent power structure created during the struggle, not the stated mission. All of these “missions” eventually unite for to continue the ultimate mission to control every aspect of our lives on a global scale.

i’ve read that it’s even worse. the true goal isn’t power or control. the real reason is the extinction of humans! we are the problem. the solution is no more people. research the club of rome

This is fascism dressed in fancy new clothes. Eventually they will kill CO2 emitting “deniers” as heritics.

Beside all the tree planting, most regions of the earth have shown a net increase of vegetation, as observed by satellite surveys. This has been suggested to be due to the higher CO₂ levels in the atmosphere. Our planet has a myriad of feedback mechanisms, without which it would have died hundreds of millions of years ago. Higher carbon dioxide levels cause greater plant growth as well as greater absorption in the oceans, which cause an increase in the growth of marine life which take up the carbon and precipitate it. That’s where limestone and marble come from, you know.

At the present 400 ppb CO2, plants are “starving” as 1600 ppb is optimal for plants… This was pointed out by one of the founders of Sierra Club. As the Arctic “warms”, more vegetation grows…which “banks” carbon in cellulose. Haven’t read of the effect of this on “climate change”… may be “inconvenient”.

Last I knew, the Sahara had shrunk by about 10%, and it wasn’t from Arabs planting trees.

I don’t know why the facts concerning CO2 that BillR so accurately portrayed are never mentioned by the climate change fanatics. CO2 is a greenhouse gas for a reason.
Makes it appear that AOC and her ilk are denying established science solely to facilitate their draconian tax plans.

Snowflakes are incapable of grasping the concept of a greenhouse. To them it’s some terribly awful thing that’s destroying the planet, not a place where half their dinner has been raised.

notamemberofanyorganizedpolicital in reply to MrE. | October 18, 2019 at 1:54 pm

All of this hysteria detracts from the very real need to deal with solvable environmental problems such as reestablishing kelp beds, abalone, various fisheries including cod along the eastern seaboard, oyster beds (the USA has about 1% of its historical population), forest diversity etc. Science is arriving at very real solutions to these problems, but all the wind is sucked out by global warming. In fact many “Greens” do not want these populations restored because it detracts from the catastrophic vision they need to propagate. This attitude is found throughout the EPA, the various fish and wildlife departments, the Department of the Interior, etc. All, in some instances, try to prevent restoration via the application of rules and regulations often meant for another action altogether.

A, but increased numbers of bison means more f–t gas gets pumped into the atmosphere, raising the level of green[house] gasses…

Water vapor is the most important greenhouse gas.
http://web.gps.caltech.edu/~xun/course/GEOL1350/Lecture6.pdf

Water vapor (WV) and CO2 absorb/radiate in the same bands. There is on average 50 times as much WV as CO2 in the atmosphere..

What is the problem? The oceans will need to be drained.

CFCs were banned when they went off patent.

Their relation to the ozone hole may be imaginary.

The better and far more significant reason why India and China deserve credit for the greening of the Earth is because they are dumping so much CO2 into the atmosphere. At the start of the 20th century CO2 concentrations were below 300 ppm. Since plants start starving to death at concentrations of around 200 ppm and find the optimal concentration for growth to be around 1200 ppm, it should be clear that plants have historically been struggling. With the increased concentrations, plants no longer have the struggles they once faced which means they are more drought tolerant and such. Much of the observed greening has occurred around the fringes of the major deserts as a result. Thanks China. Thanks India.

Hmmmm… What do the bison know that we don’t??