“Now I’ll tell you this. Joe Biden has a problem. Because his son was trading in his name.” 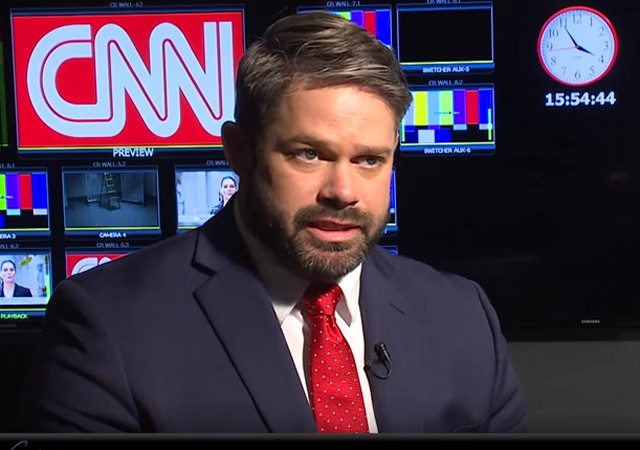 Project Veritas has released the second part of their new series about CNN. You can see Part 1 here.

In part 2, the focus shifts to the 2020 Democratic primary and how CNN feels about the candidates.

The only candidate who gets a somewhat positive mention is Elizabeth Warren. Joe Biden is mocked at one point for the idea of not knowing his location. Also, one senior level person suggests that the issue Biden is having with his son is a big problem:

One fascinating moment comes up around the subject of Kamala Harris. Jeff Zucker likes the idea of banning Trump’s Twitter account. He doesn’t think it would happen, but he thinks it’s a good thing to discuss:

“Do I think he’s a likely nominee? No, I don’t…” – VP and Political Director David Chalian

It’s important to not that this series of reports from Project Veritas has already been noticed by Trump:

Now that we have found out that @CNN is a virtual fraud, rumor has it that Jeff Zucker will be resigining momentarily?

Here’s an excerpt from their Part 2 report:

Cary Poarch, who wants CNN to “get back to the facts and get back to reporting news,” used a hidden camera to record conversations over several months…

In a discussion about why Democratic candidate Joe Biden’s campaign rally isn’t broadcast in its entirety, a CNN employee indicated that decisions seem to be based on ratings:

CNN is hosting tonight’s Democratic Presidential Primary Debate, and a lot of discussion took place with various CNN employees about CNN’s treatment of several of the candidates.

CNN’s Media Coordinator Christian Sierra explained that by focusing on just a few candidates the network treats others unfairly:

CNN Insider: “Who is CNN unfairer against right now on the debate?”

Christian Sierra, CNN Media Coordinator: “Um, I think probably Yang and Klobuchar. One of the lesser ones. Just cause they’re going to talk about Biden more Warren and Sanders. They’re not going to mention others.

According to The Wrap, CNN staffers don’t seem very interested in any of this:

Network Staffers Unfazed by Project Veritas’ ‘Expose CNN’ Campaign: No One ‘Really Cares About This’

Staffers at CNN aren’t worried about the latest leaks from Project Veritas’ “Expose CNN” campaign, though the passcode to the network-wide 9:00 a.m. editorial call was changed ahead of Tuesday’s meeting. If anything, they’re annoyed at the “gross” tactics used to obtain undercover videos of junior staffers discussing network operations.

“I don’t even know what [it] is,” said one staffer when asked about Project Veritas’ latest campaign against the network.

Does anyone believe Hunter’s accretion of wealth from Ukraine and China doesn’t end up in Joe’s pocket?

No, actually it doesn’t end up in his pocket. It ends up in his family’s pocket, which, in the mind of the media, makes it okay.

In my mind, it makes it even more perverse than if it ended up in Joe’s pocket. None of his family will be asked to submit tax returns for public scrutiny. None of his family even has to deal with the sunshine laws that allow us to see how the money is used.

Hunter can support and influence things on behalf of his father and no one will be held accountable for how the money will corrupt this nation. Not by our government or by our main stream media.

LGR gets it. Further, there was no need for dad and son to discuss the job explicitly, although they probably spoke about it at some point When the rest of the Family doesn’t exist, I father and son do a lot of communicating on automatic. Stating “I didn’t talk about that with my son” is the sort of diversion and deflection a veteran politicians & media do.

Joe to son, Hunter, at family gathering: “Hey Bud, can you, uhhh …., loan me $100,000 on a hand shake? No need to get those lawyers involved with their pesky disclosure requirements. “

This is what our “news” has become

A little power is a terrible thing in the wrong hands

The problem is that this bias isn’t something those of us on the right didn’t already know, and that those on the left aren’t already cheering on.

Veritas needs to publish full transcripts. They might not like it, but a lot of people don’t have the patience to sit through an Internet video.

Nor the time to sit thru one. I’m no Emily Wood, but I can get thru the written transcript a lot faster than what it takes to watch it. And when your eyes work better than your ears, the transcript is the way to go.

I heard Ukraine made a 10 million dollar donation to the Clinton foundation after getting their billion dollar aid package.. This true?

Ukraine was the largest of the Clinton donors, but that is total money donated from anyone in the Ukraine. I have not looked up when or who, if that is even possible. I do know it was around 10 million.

The dude loses his job over tall tale Fauxcahonats.

In other CNN non-news….

What the Biden’s did may or may not be prosecutable but it is definitely corrupt.
But let us change the subject. The Democrats have claimed that Trump was wrong to even mention the word Biden in his foreign phone call, because Biden is his political opponent. And some members of the press seem to believe that allowing the public to hear someone mention the probable corruption of the Biden’s is improper, I guess because Biden is Trump’s rival.
Actually, Biden is not a rival of Trump, only a potential rival. He is a rival of the other 20 or so candidates for the nomination, If that makes it wrong to criticize him, it would seem to be wrong to criticize any of the other candidates for the nomination.
The trouble with that is, all Trump has to do is to announce that he wants his supporters who are registered Democrats to write his name in in their primary election, for president.
That way Trump would have the same right to be free from criticism as Biden has. Of course he would be unlikely to want to criticize himself,m but those mean old never-Trumpers woul be sinning if they said a word against him.
This is the insane world that the Deomocrats are pushing for.