In January 2018, David Campbell was “charged with assault for strangulation, possession of a weapon, assault of a police officer, resisting arrest and loitering” 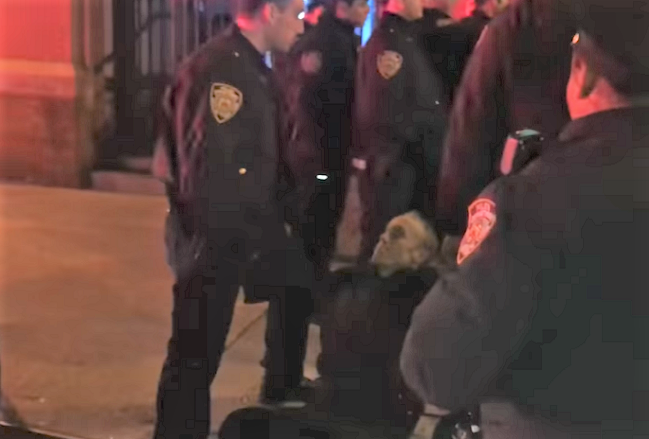 Back in January of 2018, a “Night for Freedom” event organized by Mike Cernovich erupted into violence when antifa mobs showed up to protest in their own special way.

Ultimately, a 56-year-old man was rushed to the hospital and the then 30-year-old suspect, David Campbell, was arrested on a host of charges.

The New York Daily News reported at the time:

Violence erupted outside an alt-right gala in Midtown Saturday when a black-clad protester punched and choked a partygoer, cops said.

Far-right provocateur Mike Cernovich was inside the event at the FREQNYC nightclub on W. 50th St. when the fisticuffs broke out about 10:30 p.m.

The 911 caller said initially that the 56-year-old was in cardiac arrest after the fight, according to fire officials. He was taken to Bellevue Hospital in stable condition, officials noted.

Campbell, 30, was charged with assault for strangulation, possession of a weapon, assault of a police officer, resisting arrest and loitering, police said Sunday morning.

Earlier this week, Campbell pleaded guilty to two charges of felony assault and may be sentenced to jail time.

According to Breitbart the specific charges to which he pled are “second-degree attempted gang assault, and second-degree assault with intent to cause physical injury to a police officer.”

An “Antifa” street thug can now look forward to continuing his fight — from jail.

David Campbell, 32, copped a plea for his role in a 2018 beatdown outside the Night for Freedom party in Manhattan organized by right-wing activist Mike Cernovich.

Campbell pleaded guilty to two counts of felony assault and will be sentenced on Oct. 23 to 18 months in the slammer, reps for Manhattan District Attorney Cy Vance Jr. told The Post.

Campbell was arrested near the venue, a nightclub at West 50th Street and 12th Avenue on Jan. 20 2018, after he punched and choked a 56-year-old man he had followed out of the event, police said. He was one of about 80 Antifa agitators protesting the gathering.

Time to make one an example or this will never end.

Same applies to the Coupsters trying to take out Trump! Someone’s heads to to be on the platter, metaphorically speaking, of course

The FBI needs to investigate these thugs and find out who is organizing and paying them. Then charge under terrorism and RICO statute. Hopefully they will be able to throw SOROS in prison.

The FBI is on their side.

“He was one of about 80 Antifa agitators protesting the gathering.”

Example for sure, with about half leaving the scene in body bags.

The rest should have a close encounter with castration bands, then be held for 24 hours to make sure that the bands will work. For the good of society, they should not reproduce 🙂

“May be sentenced to jail time.”

Hopefully he’ll face more than “jail time.” A few years of breaking rocks in a state prison, for each count, would be a nice start.

This is New York City, not part of the United States. Suspended sentence or probation is all but guaranteed.

He may do a little time, assuming he isn’t released immediately for time served. But the fix was surely in:

You see anything about the first degree with intent to commit great bodily harm, or the second degree attempted murder charge that should have come from his assault on the 56 year old man? You know, the one that knocked him out and sent him to the hospital?

guess that’s possible–this pos assaulted a police officer, though, and NYPD are a pretty tight group–don’t think they’ll let him go with a slap on the wrist for that offense

Well, that’ll teach ’em. Next time, wear your damn mask; then witnesses won’t be so annoying.

Oh, and don’t try to get tough with the police; that, they can’t ignore.

I find the write up confusing, it says he may face jail time, and The Post says he will get 18 months jail time.

I get it that sentences can be suspended, but in this case where he assaulted a police officer, and this is a plea deal, I would think the 18 months is the done deal… though good behavior usually shortens the time behind bars.

This thug hit an older man, he could have killed him – as his head hit the curb. It seems the thug is getting off light.

Antifa – the fascist like terrorists – are not wholesome kids seeking to protest, they are looking for fights. It’s part of why they wear masks. They are punks who think they can beat up on those they disagree with. That isn’t protesting, its inciting riots.

2nd degree gang assault is classed as a violent felony with a minimum 2 yr sentence, up to 15 years. The second charge is a class 3 felony with a sentence of 3 years and up. Seems like he’s getting a sweet deal but he now has two felonies on his record.

Guess he can never buy a gun, then. Good for his future victims to know.

Newsflash: they don’t. They don’t want their names on any forms, and so they either steal guns or buy them from other crims on the black market.

What you really mean is, he won’t be able to buy a gun LEGALLY; but that won’t stop him from having a gun!

So… can we go after the gang now?

FINALLY one of the PantyFA brigade got something approaching justice. I’m still physically ill the CommieFornia ‘professor’ Eric Clanton wielding the potentially-LETHAL bike-lock got literally NOTHING (what, PROBATION? And then THAT sentence was suspended?). There’s indeed TWO-TIERED Just-Us in the land.

I vaguely recall he got “community service” for the bicycle-lock thing . . . though I have no idea what sort of service such a hammerhead could perform for a community.

Strap him over a barrel.

Now, for the lawsuit for battery (the antifa thug won’t be successful in discharging it in bankruptcy).

Please, he ain’t going to jail, he’s considered a ‘hero’ on the left and will walk. There are two justice systems here in the US, rules for us and rules for them.

https://www.nytimes.com/2019/08/19/nyregion/proud-boys-verdict-trial.html And these ‘Proud Boys’, who are the true heroes in my book are getting 15 years.

“Campbell, 30, was charged with assault for strangulation, possession of a weapon, assault of a police officer, resisting arrest and loitering”

In NYC? I see some unsupervised probation and the Keys to the City from the commie bastard mayor…

Throw the book at ‘im!

What kind of pathetic loser excuse for a man is engaging in this kind of activity at 30 years old?

Guilty of two felony assaults and “he may get jail time”! Our laws obviously protect the guilty!