“With this selfie factory, she’s normalizing that image — in the same vein that Douglass used photography.” 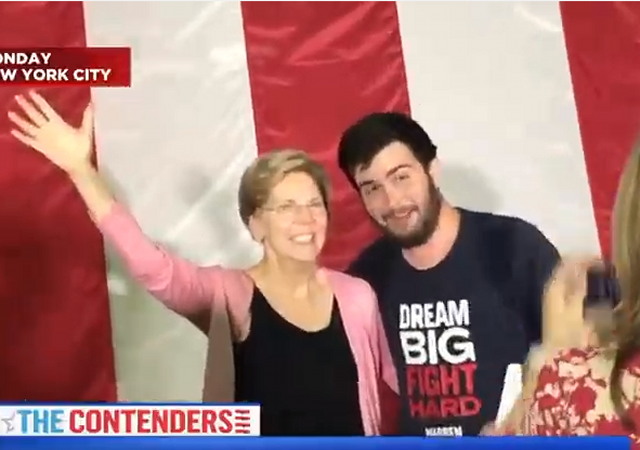 If you want to know how the liberal media is going to treat Elizabeth Warren going forward, especially if she gets the Democratic nomination, a recent piece in the Washington Post is a good indicator.

Warren’s campaign has found a useful new hook. She sticks around after events to be photographed with supporters. Hannah Natanson of the Washington Post has somehow managed to link this to the famous former slave, abolitionist, and author Frederick Douglass:

They look nothing alike.

Frederick Douglass — a black man campaigning for the abolition of slavery in the 1840s — appears alone in almost every photograph, staring down the camera in isolated, thoughtful splendor. Elizabeth Warren — a white woman campaigning for the presidency in 2019 — features today in countless iPhone photos and Instagram feeds, her arm around voter after voter, always bearing the same wide grin.

The two are separated by race, gender and more than 100 years of history that forged an America that would probably be unrecognizable to Douglass. Still, experts say, their use of photography collapses the distance: Douglass sat for scores of pictures to normalize the idea of black excellence and equality, and Warren’s thousands of selfies with supporters could do the same for a female president.

“It is cognitively harder for people to think about women in the role of political leader because we haven’t seen a lot of women in political leadership,” said Nichole Bauer, a professor of political communication at Louisiana State University. “With this selfie factory, she’s normalizing that image — in the same vein that Douglass used photography.”

This Twitter user, who I don’t know, shares my last name and my feelings on this:

Wait until the left finds out Frederick Douglass was a Republican.

Andrew Kugle of the Washington Free Beacon notes that the media has embraced the Warren “selfie” narrative with obvious enthusiasm:

“The fact that she can do this for even four hours … that in and of itself is pretty remarkable,” CNN correspondent MJ Lee said.

Reporters from the Washington Post, New York Times, and CBS shared on social media their amazement at Warren’s ability to stand and pose for hours.

Elizabeth Warren is still taking selfies. For context, I have left the rally, taken a train to Brooklyn, ordered uber eats, watched an episode of the Sopranos, and played two FIFA matches

Nearly four hours after she finished her speech, Elizabeth Warren makes it to the end of the selfie line pic.twitter.com/bSqrkum8iM

I stayed at Warren’s event for about an hour after she finished. Then went home, watched the Browns game, showered, caught up on emails, ordered some new dresses, hopped on Twitter to find Warren’s selfie line is still going!

He also provides this reel of slobbering journalists:

They don’t seem biased at all, do they?

Frederick Douglass also breathed. I believe most of the candidates do that also.

notamemberofanyorganizedpolicital in reply to Close The Fed. | September 21, 2019 at 3:40 pm

So Lizzie’s now claiming to be of African descent?

Not only are they moving the goalposts, they’re shrinking them down to invisibility.

How dare the WaPo compare the Native American feminist victim of misogyny and racism Warren to the white supremacist RepubliKKKan Frederick Douglass!

The racist bastards! She is even a victim of the media! Somebody get in there and give her a hoof rubbing she must be hurting.

The flip side of this, is that that’s all they’ve got. She’s not smart, honest or hard-working. She’s not a good orator. Her policies are idiotic. She’s not likable or charismatic. She couldn’t tell a decent joke to save her life.

She’s Hillary, without the charm and bubbly personality

Does this in her mind make her hip or tech-savvy?

About as much as drinking that beer does. Maybe more given the egocentric nature of her supporters.

As to economy issues, she is right as often as Krugman was right with his forecast of the economy under Republicans.

There is a rumor I just made up that Fredrick Douglass carried the prototype for the iPhone with him everywhere for taking selfies. A truly remarkable man.

That hairy person she is taking the picture with has cheekbones that are as high as hers… he must be a Native American Indian … just like her.
Or not.
I don’t call him male, as a real man wouldn’t be likely to support Lizzy Warren.

The way she’s always thrusting her hands in the air someone ought to meme that – Photoshop a tomahawk in her hand, beer, basketball, Biden’s severed head, or if both hands raised a chain, bow and arrows, etc.

Seriously, what’s the deal with the Dems and the weird, spastic hand movements? It’s like Elizabeth and Robert Francis hired the same political consultant who specializes in training candidates how to fake enthusiasm and sincerity through mime-type hand action.

Maybe she’s hired John Travolta’s dance coach from Disco Fever? A side by side GIF with Warren and Travolta would be cool … https://www.youtube.com/watch?v=LUID0jSh2Ic

Next, the corrupt POS fraud will be touring the country in blackface, in her new act as “Mammyhauntas”.

She has the endurance!!!

Cultural appropriation that is both petty and gross simultaneously.

1. Funny mushrooms in the drinking water.

I, too, have some amazing similarities with Frederick Douglas.

1. I also have been photographed.
2. We both eat/ate food.
3. We both rarely if ever appeared in public completely nude. As far as I can remember; it must be all the brewskis I’ve been having with Elizabeth Warren and the shots I’ve been slamming with Kirsten Gillibrand.

Normal people are going to look at this and know this is all deeply weird. Even lefties who still retain some remnants of normal are going to think that. Case in point; the reaction of Naomi LaChance. She writes for the leftie online rag “The Intercept.” It is owned, through his media group, by Pierre Omidyar, a high tech multi-billionaire and major donor to the Democratic party and their pet causes.

And even Naomi LaChance’s response, “Yuck! Hey WaPo, if you’re going to give Warren a tongue bath get a room. Don’t do it in the street because you’re scaring the horses.”

The good thing about all the over-the-top fan worship Warren is getting from her base is that she’s going to find it impossible to move to the center for the general election. She’ll lose them, and no one watching this crap will buy her “now I’m the sane one, guys.”

Yes! Sip that shot, baby. And look at those dance moves as she rocks out.

She is so authentic; the engineers have definitely improved the system because she is far more lifelike than the last model the Dems ran in 2016. I’m stunned she’s not on TV more, like the last model, saying things like, “You may wonder why I’m not 50 points ahead.” She should be the front-runner, but instead she had to drop out of the race. Shocking.

Yes, whenever I think of the greatness, strength, and dignity of Frederick Douglass, Elizabeth Warren always comes to mind.

What an insult to Fredrick Douglass! Comparing this spoiled scarecrow of an idiot to Douglass is beyond idiocy.

I rather think it makes her look as a narcissistic lying culture appropriating Fauxahontas.