Johnson not “deterred” by the ruling, vows to deliver Brexit on October 31. 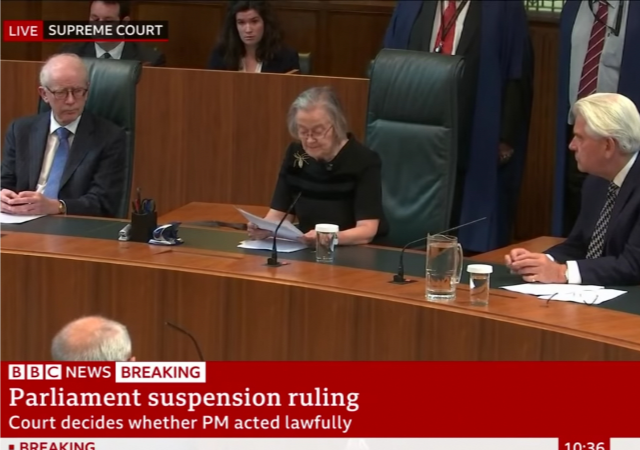 The British Supreme Court has ruled Prime Minister Boris Johnson’s decision to suspend the country’s parliament for five weeks “unlawful, void and of no effect.” The verdict paves the way for the UK House of Commons to reconvene tomorrow.

Johnson, who was in New York for a United Nations summit at the time of the court ruling, promised to respect the top court’s decision but “strongly disagreed” with it. He also reiterated his commitment to take his country out of the EU by the end of the next month.

“Obviously this is a verdict we will respect, we will respect the judicial process,” Johnson told the BBC. “The important thing is we get on and deliver Brexit on October 31.”

Johnson accused the elite sitting in the country’s parliament and judiciary of trying to prevent the UK from leaving the European Union.

Boris Johnson’s decision to suspend Parliament was unlawful, the Supreme Court has ruled.

Mr Johnson suspended – or prorogued – Parliament for five weeks earlier this month, but judges said it was wrong to stop MPs carrying out duties in the run-up to Brexit on 31 October.

Supreme Court president Lady Hale said “the effect on the fundamentals of democracy was extreme.”

The PM said he “profoundly disagreed” with the ruling but would “respect” it. (…)

The court ruling does not prevent him from proroguing again in order to hold one, as long as it does not stop Parliament carrying out its duties “without reasonable justification”.

A No 10 source said the Supreme Court had “made a serious mistake in extending its reach to these political matters”, and had “made it clear that its reasons [were] connected to the Parliamentary disputes over, and timetable for” Brexit.

The UK mainstream media and the opposition Labour Party used the Supreme Court judgment to attack Johnson. Labour Party leader Jeremy Corbyn asked Johnson to resign. “He is not fit to be prime minister,” Corbyn said in response to the court ruling.

EU officials joined the chorus. They believe that the verdict will weaken the UK government ahead of the Brexit deadline.

“The UK supreme court ruling against Boris Johnson was celebrated in EU capitals,” the left-wing British newspaper The Guardian reported, adding that Brussels is “convinced that the prime minister has lost control of events and will not be able to crash Britain out on 31 October.”

The UK government we ‘not be deterred’ by the court ruling

The beleaguered prime minister received backing from his American counterpart. President Donald Trump came to the defense of Johnson in a joint press conference today. He slammed a reporter for asking if Johnson should resign after the court’s judgment. “That was a very nasty question,” Trump responded. “I know him well, he’s not going anywhere.”

“Today’s Supreme Court ruling is a vile assault on the democratic order,” O’Neill wrote in the magazine Spike. “This was a decisively political act by 11 unelected judges who have taken sides against the government of the day, and this opens up a new, dark era in British political life,” he added.

It may be too early for the EU supporters to write off Johnson or celebrate the derailment of Brexit. As the Daily Telegraph noted: The ruling is “of course a significant blow but let’s be clear – Mr Johnson won’t be resigning any time soon, and whilst he maintains the support of party members, the Parliamentary Conservative party and the Cabinet, he remains the Prime Minister and leads an administration committed to leaving the European Union on October 31.”

Following the verdict, the lawmakers will return to the Lower House tomorrow, the outgoing Speaker of the Parliament John Bercow announced.

“In reaching their conclusion, they have vindicated the right and duty of Parliament to meet at this crucial time to scrutinize the executive and hold Ministers to account,” Bercow said. The move paves the way for lawmakers to put up legislative hurdles as country braces to leave the EU.

The europhile lawmakers may have a majority in the parliament, but they lack democratic legitimacy. Out of 644 constituencies in parliament, 406 voted to leave the EU in the 2016 referendum. The lawmakers conniving with Brussels to overturn the people’s verdict will sooner or later face the wrath of voters at the ballot boxes.

The women making the announcement has a big bug pin on. Makes her look evil. New Anti-Bexit symbol?

The woman making the announcement is strangely familiar – I’ve got it – reminds me of the Notorious RBG.

Are we certain that it isn’t real? 😉

notamemberofanyorganizedpolicital in reply to MarkSmith. | September 25, 2019 at 4:40 pm

Because she is EVIL.

The UK “supreme court” is UNLAWFUL,
but their illegal action in the UK Coup will be blood upon their unholy evil heads.

The bug was in her ear, according to KHAN!!! anyway.

I tried to convince a Brit that Johnson telling the British court that it was none of their concern was a guarantee for losing the argument. “No no! Our highest court is not political like yours. They will not take that as a challenge of their authority. The law is clearly on Johnson’s side.” And yet, as predicted, they did. And he lost.

The New York Sun has an excellent column regarding the absence of politics in the court’s decision; in a word (mine), nonsense. The ruling notwithstanding, Johnson appears to remain undeterred in his push for Britain’s complete separation from the EU and return to independent nationhood, both very good things.

I have a different, stronger word I would use.

notamemberofanyorganizedpolicital in reply to clayusmcret. | September 25, 2019 at 4:42 pm

Except this actually makes it a WIN for Boris.

More UK citizens are “red pilled” by the UK “supreme court” illegal action taking their part in the illegal coupe against the UK People.

“” “This was a decisively political act by 11 unelected judges who have taken sides against the government of the day,””

Welcome to our world.

Oh the “Great” Britain: that’s where we are headed if we don’t get rid of partisan hacks in a black robe.

I like how old spider lady has scissors in her little cup on the bench. How often is she up there cutting papers or doing arts and crafts?

Which law did Boris break?

I’m hoping the Queen has had enough with those who would rule in her place. She should do all within her power to cut this travesty down. It’s HER power the court is ultimately usurping, not Johnson’s.

What’s the point of being a monarch if you can’t send someone to the tower for being a treasonous ***.