Brexit: PM Johnson Tells Supreme Court to Stay Out of Politics Ahead of Crucial Verdict

Brexit: PM Johnson Tells Supreme Court to Stay Out of Politics Ahead of Crucial Verdict

“Courts are not to cross the boundaries and intrude upon the proceedings of Parliament.” 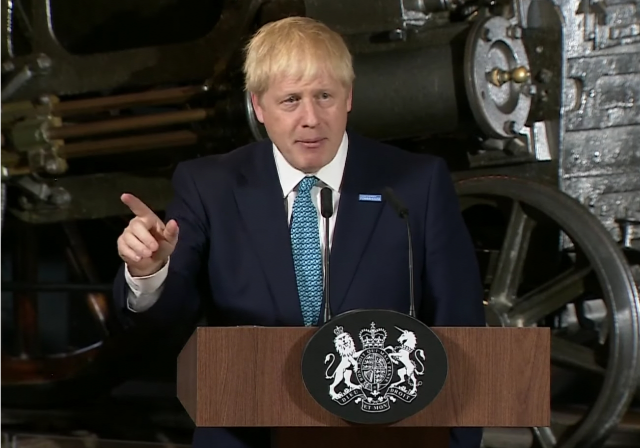 British Prime Minister Boris Johnson has told the country’s Supreme Court to stay out of “political arena.” The top judges will soon hear evidence on whether he acted lawfully by suspending the parliament until October 14. Johnson “warned Britain’s most senior judges not to intervene in his decision to suspend Parliament,” UK’s Daily Mail reported.

The suspension of parliament is an “inherently and fundamentally political” matter and is not something for the judiciary to decide, the government’s lawyer Sir James Eadie argued before the UK Supreme Court.

Last month, Johnson suspended parliament for five weeks starting September 9, much to the dismay of the lawmakers opposed to Brexit. A group of around 70 members of parliament (MPs) challenged the decision before a Scottish court. The European Union supporters in Britain see parliament’s suspension as a move to prevent lawmakers from mobilizing support in the House to block a no-deal Brexit as the October 31 deadline approaches. Johnson’s government has vowed to take the country out of the EU, with or without a deal with Brussels.

Last week, the lawsuit reached Scotland’s highest civil court, which ruled the suspension unlawful. The case is now before a bench of eleven Supreme Court Justices.

London-based newspaper The Sun reported the stance taken by Johnson’s government before the Supreme Court:

Boris Johnson today told the Supreme Court to butt out of the extraordinary legal row over Brexit – as 11 judges launched a historic hearing into whether he misled the Queen.

The PM’s top QC insisted it was not for the highest court in the country to rule on whether he was right or wrong to suspend Parliament.

Lord Keen said the Supreme Court would be guilty of “intrusion” in ruling on something that was “political convention”.

And he stormed: “The courts are not to cross the boundaries and intrude upon the proceedings of Parliament.”

There is a lot at stake for the government and the nation. The UK’s Daily Telegraph explained: “If the Government loses the case, Mr Johnson could be forced to recall MPs to the Commons, giving Remainers the opportunity to find new ways of tying his hands over Brexit, and maybe thwarting Brexit altogether.”

The lawmakers opposed to Brexit allege that the government is undermining parliamentary sovereignty by sending the House on recess. As many Brexiteers have long argued, the overwhelmingly support for the EU in parliament does not reflect the will of the British people. Out of 648 seats in the British Lower House, 406 constituencies voted in favor of Brexit in the 2016 referendum, opposed to just 242 that wanted to remain.

Those numbers have moved profoundly in favor of Brexit if one believes the recent polls. The latest snap poll conducted by Sky News showed that close to 74 percent of British respondents now favor a no-deal Brexit. “The best thing about Brexit is that it has confirmed again and again that the crowd is so much wiser than the elite,” British columnist Brendan O’Neill commented on social media in response to the poll.

The political elite and mainstream media continue to pedal the fear campaign. They began this campaign in the wake of the referendum three years ago, which has failed to cower down the British people into accepting the Brussels’ yoke and break their resolve to leave the EU. Now it’s up to the elected government to steer the country out of the European bloc on October 31. Anything less will shatter their trust in the parliamentary democracy.

Remoaners – you don’t like it, call a new election.

But I think you know how that will turn out…

Isn’t prorogation of Parliament actually done by the Monarch? If the Supreme Court orders the PM to recall, i.e. un-prorogue, Parliament are they not then usurping the authority of the Monarch? Looks like potential judicial activism in Blighty.

That’s sort of what I’ve been reading about it too. Essentially that in the British Parlementary System, the courts do not have Judicial Review the way they do in the US system.

I’m thinking one key problem is that Parliament managed to remove the systems that force a new election when they can’t work with or remove the government.

It’s similar in some ways: judges are supposed to stay out of political questions. And the prohibition only works in fits and starts.

They made a mistake when they passed the fixed term parliament act in order to preserve the previous Tory-LibDem coalition for 5 years in that they didn’t put an expiration date on that legislation.

I highly recommend this piece about Brexit from Christopher Caldwell in the Claremont Review of Books. It describes the encroachment into British law and process by the EU and courts.

that is a great synopsis of the events. Thank you for posting it.

I am having trouble finding information on this that I trust. I like to read the Daily Mail for US politics (still with a cup of salt, LOL). But I don’t know where to find good UK coverage that isn’t terribly biased.

I prefer Telegraph, Spectator and Skiped. Try them out!

It seems everyone writing negatively about the “proroguing” leaves out that it’s a perfectly normal thing*, and the Queen has the authority to do it, and the PM has the legal right to ask for it.

It’s really difficult to see how the courts can declare it illegal, at all. Except by usurping the Queen’s and PM’s powers. Heads have rolled for that in the past.

(* It was supposed to happen anyway, but BoJo supposedly did it early to cut them out of the Brexit non-deal.)

Since only Johnson and the Queen know what the Queen thinks, this is an interesting game being played. The final arbiter in this is the Queen and what monarch of England (and GB and UK) would give up final control of their country to foreign agents.. again? The BIG danger is waiting too long and lose QE2 to history and the Crown to… tah-dah.. Charles! Charles is in position to outdo Edward VII.

It is my understanding, subject to correction obviously, that the process of prorogation is normal in every term of Parliament and divides the two sessions with basically a vacation. Further, I have been told that this was the longest uninterrupted session since the 1600’s. And that it was being held in session solely for the purpose of trying to stop Brexit with delays. All the normally scheduled tasks in the session were done.

We shall see. Just noting that if Brexit fails, Britain is no longer an independent country, and any alliance, military or otherwise, should be moot.

The argument that the Scottish court bought was that this is different, because Johnson’s real motive for advising the Queen to prorogue was not the one he gave her, and was improper. Johnson is arguing to the Supreme Court that his real motive is none of any court’s business. He had the right to advise the prorogation, the Queen had both the authority and the duty to act on that advice (the recent law that took away her authority to dissolve Parliament explicitly preserved her right to prorogue it), and that is all that matters. He does not deny having political considerations — he’s a politician, and is supposed to have those, and the courts have no right to concern themselves with them.

“But, but, this is different!”
Yeah, that’s what I was getting from it, too.
I wonder if old laws about defying the monarch are still in force there? I know the Tower has some empty rooms….

No, the beauty of the modern system is that they’re not defying the Queen, they’re defying the PM. Since she has to act on her government’s advice, you can criticize everything she does without criticizing her; the blame all goes to the PM who made her do all those bad things. And in this case they’re claiming (based on nothing much) that the PM actually misled the Queen, so they’re actually defending her!

It’ll be funny if SCOTUK rules against Johnson but the Queen prorogues Parliament on Boris’ schedule anyway.

What are the justices going to do to her if that happens?

The UK’s Daily Telegraph explained: “If the Government loses the case, Mr Johnson could be forced to recall MPs to the Commons, giving Remainers the opportunity to find new ways of tying his hands over Brexit, and maybe thwarting Brexit altogether.”

Or he could ignore the decision, on the grounds that it was ultra vires, and that while the courts certainly have the authority to declare what the law is, that authority is at its weakest when they decide to expand their own powers.

The thing is, to take such a stand he’d have to have the Queen’s private backing, and nobody but him and his living predecessors really knows what she thinks. She doesn’t talk politics with anyone else.

There is no real predicting how this UK fight turns out. The anti-Brexit faction has a lot of options, and plenty of time to execute them – even if the Parliament stays suspended until Oct 14. It all comes down to how desperate they are and how much they are willing to sacrifice to stop Brexit. For instance, once parliament reconvenes, they could push through a vote of no confidence and elect Corbyn PM.

Judicial review is inconsistent with an unwritten constitution. The judges need to have a written document to set the guidelines, even if they do stretch them through interpretation as our courts do. Otherwise, it is just the judges’ politics that guide them and they become a sort of super-parliament.

There is no judicial review of statutes. Parliament is sovereign and can make whatever laws it likes, and statutes always override the common law. But there is and has always been judicial review of executive actions, because the king is just as bound by the law as are his subjects, and it’s the courts who determine what the law is. There is no more need for a written constitution than there is for a written common law.