PM Boris Johnson’s spokesman: “We will find a way to deliver on what the British people want, which is to deliver Brexit by 31 October.” 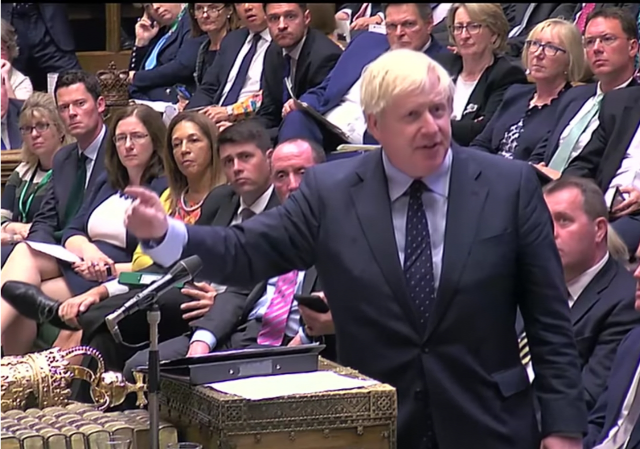 British Prime Minister Boris Johnson’s plan to push for a no-deal Brexit suffered a setback today after the country’s parliament passed a bill to delay the Brexit beyond October 31. The motion was voted by 327 votes to 299, giving it a majority of 28 in the Lower House. The bill has now moved to the Upper House.

The Members of Parliament (MPs) opposed to no-deal Brexit are running against time. The bill will require approval of the Parliament’s Upper House, the House of Lords. If Lords pass any amendments, the bill will again return to the Lower House for a vote. The “pro-Brexit peers have tabled over 100 amendments to try and filibuster the motion and stop the bill going ahead,” BBC confirmed. To make matters even worse for the pro-EU lawmakers, Prime Minister Johnson has suspended the parliament for five weeks beginning next week. The parliament will reconvene on October 14, two weeks ahead of the October 31 deadline.

Prime Minister Johnson refused to resign in wake of today’s vote. He, however, reiterated the call for a snap election, a move opposed by the opposition Labour party. Labour Leader Jeremy Corbyn wants the no-deal option off the table before considering the prospect of facing the electorates.

The government appears to be committed to delivering Brexit regardless of today’s proceedings. “We will find a way to deliver on what the British people want, which is to deliver Brexit by 31 October,” a spokesman for the UK Prime Minister said earlier today. “If the PM cannot get the Bill through Parliament because Parliament is determined to wreck the negotiations, the only other option then is a general election.” The Prime Minister will not step down if the government were to lose the vote in the parliament, the spokesperson added.

MPs have backed a bill to block a no-deal Brexit, which could trigger Boris Johnson to seek a general election.

Opposition MPs and Tory rebels ensured the bill passed its first stage by 329 votes to 300. If it is passed in full, it will force the PM to ask for an extension beyond the 31 October Brexit deadline if a deal has not been agreed with the EU. (…)

This vote was on the second reading – the parliamentary stage which examines the main principles of the bill – and was the first chance for MPs to show whether they supported the bill.

MPs are now voting on amendments to the bill – put forward by MPs, but chosen by the Deputy Speaker.

At the end of the day it’s a no-deal Brexit or Jeremy Corbyn,” Daniel Finkelstein wrote in the London Times. “Leaving the EU without an agreement will damage the country but it’s still just about preferable to the alternative.

The vote comes weeks after Prime Minister Johnson accused some lawmakers of undermine country’s interests by actively ‘collaborating’ with the hostile European Union. “There’s a terrible collaboration, as it were, going on between people who think they can block Brexit in parliament and our European friends,” Prime Minister Johnson said on August 15. On Tuesday, some 160 pro-EU lawmakers signed the so-called Church House deceleration vowing to “do whatever necessary” to stop no-deal Brexit.

“Parliament is actually the one holding a coup,” columnist Tim Stanley said in the today’s Daily Telegraph. “MPs have voted to take control of the order paper in order to take control of the Brexit negotiating process: they want to rule out a no-deal Brexit, thus completely undermining the Government’s strategy. It’s highly irregular for the Commons to dictate foreign policy like this, let alone on such suicidal terms.”

With today’s bill, the MPs were paving the way for a Corbyn-led government, a scenario worse than the uncertainty of a no-deal Berxit, London Times argued. “At the end of the day it’s a no-deal Brexit or Jeremy Corbyn,” the newspaper commented. “Leaving the EU without an agreement will damage the country but it’s still just about preferable to the alternative.”

All Conservative Lawmakers Who Rebelled Against Brexit Kicked Out of Party….

The London Times and BBC, like all the MSM/Media Lies non-stop about everything.

Vijeta Uniyal in reply to notamemberofanyorganizedpolicital. | September 4, 2019 at 5:29 pm

If you follow my coverage, you know I have no love for mainstream media. But having said that, I use them to quote statements, bolster my arguments, and expose their own hypocrisy.

notamemberofanyorganizedpolicital in reply to Vijeta Uniyal. | September 4, 2019 at 5:53 pm

No problem man, I understand.

I just don’t know how many Americans are aware that the BBC went totally over to the evil side several years back.

Vijeta Uniyal in reply to notamemberofanyorganizedpolicital. | September 5, 2019 at 12:28 am

Evermore important to keep their feet to fire.

Edward in reply to notamemberofanyorganizedpolicital. | September 5, 2019 at 9:09 am

Yes the BBC went over to the “dark side”, but more like two or three decades ago (if not before then).

Your work is much appreciated.

notamemberofanyorganizedpolicital in reply to Tiki. | September 5, 2019 at 1:49 pm

Yes, Vijeta, we appreciate your work covering all those overseas news sources so we don’t have to…..

The UK must slay the demonic EU 666 Beast.

“Quoting Winston Churchill’s opinions on Islam contributed to a U.K. politician’s arrest — and possible imprisonment of up to two years.

Moves are afoot to debate this in to the ground in the House of Lords. One hundred amendments have already been raised and every one of them must be debated.

This isn’t over yet (but dobt hold your breath!!).

So … the House of Lords has more spine (or even just a spine) when compared to the Republican led US Senate? Is there still a spark of GREAT in Britain emerging?

I’ve watched some debate from the Lords. They remind me of RINO’s, and Democrats. Big business.

I could see them voting down 100 amendments in a row. Or not. But the Conservatives are like RINO’s.

Well that didn’t last long. They considered a couple of them late Wednesday night, then some deal was made behind the scenes and the whole thing was dropped.

I am not sure we know what-all is in that deal or who won it.

The EU for MONTHS has stated outright multiple times that the deal will not be re-negotiated when May was running around whining about no-deal.

Now, what, the UK wants more time to do what, not negotiate?

Johnson has them over a barrel and he knows it. Either the EU comes to the table BEFORE the deadline or they leave on Oct 31st.

Keep in mind that it only takes one country in the EU to vote against an extension for the request to be denied.

This is such an obscenity against history. The very idea of a “union” defies reason when you try to make socialists the equivalent of humans. If there is any common denominator between the various autonomous entities it is that they existed before this generation came of age.

Call for general election before Oct. 31 failed. The vote was something like 298 for, 56 against, but that’s not enough votes to get an election. Looks like the noes vacated the lobby and let the total number of votes fall short.

Earlier bill passed today *requires* PM to go to EU hat in hand, with no “no deal” option in his back pocket, to solicit a deal. EU probably would give an even worse deal than they gave Theresa May, since BJ’s bargaining position appears worse. (Am I wrong about this?) It would be a “Brexit” that is worse than the status quo.

BJ said quite rightly that he would not do that. But now he’s violating Parliament’s instructions. And there is no snap election now; that was defeated.

So what happens if BJ defies Parliament? Can Parliament hold him in contempt somehow, and would it matter? I supposed they could table a motion of no-confidence which would probably pass … leading to a general election! But would that general election be before October 31?

Someone clueful about this please explain what’s likely to happen!

People don’t really know.
They can go to court, but since Parliament is not in session, I don’t know who can bring suit.

They could have a VoNC but again Parliament is not in session, and if they can’t form a caretaker government, they get the general election they just voted down.

Nothing’s passed the House of Lords so there’s nothing to violate.

Or are you saying that only one house of parliament has to pass a bill for it to be law? That would be interesting….

So what happens if BJ defies Parliament? Can Parliament hold him in contempt somehow, and would it matter? I supposed they could table a motion of no-confidence which would probably pass … leading to a general election! But would that general election be before October 31?

Just to belabor the obvious, as with the US Congress passing bills, the House and the Commons can pass anything they wish, but it isn’t a passed bill, nor Parliament’s “instructions”, until it passes the Senate or the House of Lords.

Should have read further before posting this.

Parliament seems to be infested with the same kabuki theater infecting our own politics. In the US, despite controlling all branches of government, we could always rely on the GOP to deliver exactly the number of votes to deliver victory to the Democrats at the end. Time for another revolution. This corrupt game has gone on long enough.

“Parliament is actually the one holding a coup,”

That isn’t technically possible. Parliament is sovereign; the government is its agent, which must obey its orders and which it can fire whenever it likes, so there’s nobody for it to hold a coup against. Which is why Johnson’s only weapon against it is to call an election and hope the new parliament will be friendlier to him (which we should all fervently hope for, but is not at all guaranteed).

The swamp is very deep on both sides of the Atlantic.

Mr. Uniyal, are you familiar with the never used Queen’s Consent option?

“Queen’s Consent is a procedural requirement for any Bill passing through the Commons and Lords where the terms of the Bill would ‘affect’ the exercise of any royal prerogative if it was passed. The effect on the prerogative must be more than de minimis.

Queen’s Consent is normally a formality, because the government usually proposes (or more accurately for Private Members Bills, acquiesces to) all Bills that are successfully voted through both Houses. The current scenario could see a situation where a Bill passes in the teeth of trenchant opposition from the government.”

My head was spinning even before this.

Which royal prerogative do you claim this would substantially affect?

First of all, I am not claiming anything because, like you, I don’t understand Parliamentary law and certainly don’t have a clue on obscure precedents like this one. That is why I directed the question to Mr. Uniyal.

I actually do understand it fairly well. I can’t think of any royal prerogative this could possibly affect, so the Queen has no discretion. She assents to those bills that her government advises her to assent to, whether she likes them or hates them.