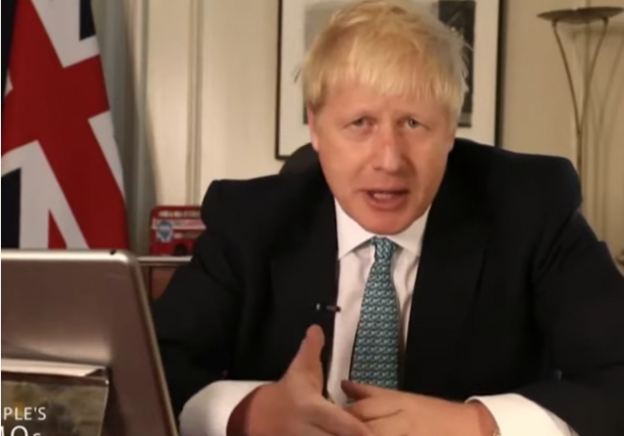 British Prime Minister Boris Johnson has accused some British Members of Parliament (MP) of collaborating with the European Union to prevent Brexit.

“There’s a terrible collaboration, as it were, going on between people who think they can block Brexit in parliament and our European friends,” Prime Minister Johnson said during a question-and-answer session on Facebook.

Johnson’s characterization of the EU as a hostile power working against the interests of Britain is in sharp contrast with his predecessor Theresa May’s subservient attitude towards Brussels. “Mr Johnson’s use of the word ‘collaborator’ has historical echoes for British people, the term was used for people who cooperated with Nazi Germany during World War Two,” the Irish public broadcaster RTÉ noted.

The statement coincides with Labour party leader Jeremy Corbyn’s attempt to oust PM Johnson’s government over Brexit. The opposition leader has sought support from pro-EU Conservative MPs to form a caretaker government. He also wants to prevent a possible no-deal Brexit ahead of the October 31 deadline, the British media reports say.

“Jeremy Corbyn has called on rebel Tories and opposition leaders to stop a no-deal Brexit by ousting Boris Johnson as prime minister and allowing Labour to form a caretaker government until a general election,” the left-wing newspaper The Guardian reported just hours after PM Johnson’s appearance on Facebook live stream.

Boris Johnson has accused MPs and the EU of collaborating to block Brexit, as he failed to rule out calling a general election after 31 October in order to push through the UK’s exit from the EU. (…)

Mr Johnson said: “There’s a terrible kind of collaboration, as it were, going on between people who think they can block Brexit in parliament and our European friends.

“Our European friends are not moving in their willingness to compromise, they’re not compromising at all on the withdrawal agreement.

“So the awful thing is, the longer that goes on, the more likely it is – of course – that we will be forced to leave with a no-deal Brexit.

Johnson favors a withdrawal agreement with Brussels that will preserve the existing trade relationship between the UK and the 27 member states of the EU, but he wants to renegotiate the terms dictated to May. If the EU refuses to put a better deal on the table, the UK must prepare itself for a no-deal Brexit, Johnson maintains. In the absence of an agreement (No-Deal Brexit), the UK will set trade terms and tariff rates with the EU member countries based on internationally accepted trade rules, also known as the WTO option.

In case of a no-deal, the UK will not have an obligation to pay the £39 billion ($47 billion) punitive “divorce bill” slapped by the EU negotiators, a British parliamentary report said. Brussels will only receive the $47 billion settlement if it shows flexibility in negotiating a better withdrawal agreement, PM Johnson said in June.

“I always thought it was extraordinary that we should agree to write the entire cheque before having a final deal,” he said, adding that “[i]n getting a good deal, money is a great solvent and a great lubricant.”

President Donald Trump has long advocated the idea of a whole U.S.-UK trade deal once the country leaves the EU. On Tuesday, Trump’s national security adviser John Bolton proposed a step-wise approach towards a post-Brexit trade deal during his visit to London.

“The ultimate end result is a comprehensive trade agreement covering all trading goods and services,” Bolton said. “But to get to that you could do it sector by sector, and you can do it in a modular fashion.”

As the October deadline approaches, Johnson faces a hostile British establishment committed to keeping the island nation within the fold of the EU — contrary to the wishes of the people. He not only faces stiff resistance from the Corbyn-led opposition but from within his Conservative party, including some senior MPs.

The Conservatives, who obtained power in last year’s general election on the promises of fulfilling the verdict of the 2016 referendum, have failed so far in delivering Brexit. If Johnson’s assessment is correct, and Conservative MPs are colluding with Brussels, this could mean a premature end of his government. Johnson, who has a working majority of just one, could quickly lose a confidence vote on the floor of the house. The only thing keeping the pro-EU Conservative MPs from rebelling against Johnson is perhaps the nightmare scenario of a transition government led by Corbyn.

The only hope for a no deal Brexit is if the EU and its fellow-traveling toadies hold tough and force Boris’s hand. Boris, it seems clear, isn’t really in favor of the no deal Brexit, but says he will do it if they make him.

So, dig in EU toads. Make Boris do the right thing.

The West is under assault by the globalists/communists/islamists.

Nobody sane is in favor of no-deal Brexit, if a reasonable deal can be had. No-deal Brexit will be hard, and a lot of people will suffer. But it’s better than the deals the EU has been offering so far. And staying in should no longer be an option.

Their schism is worse than ours.

Oh no, it ain’t. Otherwise, Boris would never have gotten elected.

Our schism is just as great, if not greater. Our government is probably much more corrupt. There have been fools elected British Prime Minister, but never the likes of clinton or obama.

The “No Deal” option is leagues better than anything the EU will agree to. Just shut down parliment, send everyone home, and reconvene in November to start throwing out the detritus the Eurocrats left behind.

The UK has it’s own swamp, doesn’t it? That Jeremy Corbyn is a real slimy POS.

“Irish public radio” grousing about “collaborators”. That’s rich, considering how many Irish did collaborate with the Nazis

Britain was concerned that Ireland might allow U-boat bases to operate, particularly on the Atlantic coast, but that never actually happened.

The only British territory occupied by Germany was the Channel Islands, Jersey and Guernsey, and there were indeed collaborators there a-plenty. Last I’ve heard, government records there are still sealed up; nobody has ever been hot to investigate collaboration.

What these members of Parliament are doing is no better or worse than what the John Kerry types are doing when they meet with Iran. It is treason, and should be prosecuted as treason.

I hope Johnson remember that “he who sups with the devil should have a long spoon”.

Johnson should appeal to the country in a new election making his theme that the failure of Brexit willopen the door to Corbyn taking over–and that would be Britain’s last election ever.