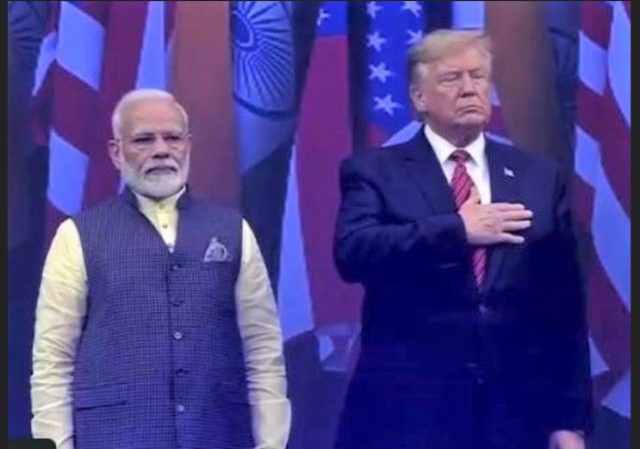 “I’m so thrilled to be here in Texas with one of America’s greatest, most devoted and most loyal friends, Prime Minister Modi of India,” President Trump told a roaring crowd.

“When I met him for the first time, he said to me ‘India has a true friend in the White House,'” Prime Minister Modi said in his address. “Mr President, this morning in Houston, you can hear the heartbeat of this great partnership in this celebration of the world’s two largest democracies.”

“Today is also a celebration of the Indian-American community in the USA including in Texas. We say thank you to you for your incredible contributions.” Senator Ted Cruz said while welcoming the Indian leader.

“Trump is completely welcomed by the community,” Texas India Forum’s spokeswoman Preeti Dawra said ahead of the event,” adding that “his presence is an indication of his support and endorsement of the strengthening of India’s relations with America.”

At the event, Mr. Modi and Mr. Trump clasped hands as they took the stage to a mix of drumbeats and cheers. Many spectators in the crowd of wore white T-shirts that proclaimed: “Howdy, Modi.”

Mr. Modi introduced Mr. Trump as “my friend, a friend of India” and as someone who “has left a deep and lasting impact everywhere.

Mr. Trump returned the compliment during his remarks, lavishing praise on Modi and calling him “a great man and a great leader.”

Modi praised Trump’s “sense of leadership, a passion for America, a concern for every American, a belief in American future and a strong resolve to make America great again.”

CBS described the rally as “one of the largest U.S. gatherings of the Indian diaspora in history.” UK newspaper The Guardian called it a “rare mass show of support for a foreign leader” in the United States.

Modi’s invocation to the 2016 election slogan, “Abki Baar, Trump Sarkar,”  was seen as an implicit endorsement of President Trump’s 2020 campaign. Modi gave “tacit support to Donald Trump for his re-election bid in the US 2020 Presidential election,” weekly India Today noted.

The massive event in Texas “provides Trump with access to a potential pool of Indian American voters that could turn out to be critical in next year’s presidential elections,” the Washington Post lamented.

Back home, India’s opposition Congress Party attacked the prime minister for “actively campaigning” to get Trump re-elected in 2020.

The 50,000-strong audience, mostly Indian-American, roared at every reference to Trump’s ‘MAGA’ slogan or his re-election bid.

Amounting to just 1 percent of the U.S. population, Indian Americans are numerically an insignificant force. The community has traditionally backed Democratic candidates, but there is a visible shift toward the Republican Party since Trump took center stage. According to the LA Times, by July 2019 Indian Americans had donated over $1 million more to “committees supporting President Trump” than any rival Democratic candidate in the fray.

Trump emphasized the growing economic ties between the two countries.

“India has never invested in the United States like it is doing today,” he told the crowd, adding that the U.S. is “doing the same thing in India.” The bilateral trade between the two countries has doubled in the past decade, growing from $68.4 billion to $142.1 billion. The U.S. is the “second-largest trading partner for India in goods in 2018, and the single largest export destination for Indian exporters,” New Delhi-based Economic Times reported.

Speaking on defense cooperation, Trump declared that “both the countries are forging an even stronger security partnership. We are looking to close several new defense deals soon,” announcing that “in November, the United States in India will demonstrate tremendous progress of our defense relationship, holding the first-ever tri-service military exercise between the two nations called Tiger Triumph.”

Trump’s most important remark was on the issue of global Islamic terrorism.

“Today we honour all of the brave American and Indian military service members who work together to safeguard our freedom. We are committed to protecting innocent civilians from the threat of radical Islamic terrorism,” he said.

“Prime Minister Narendra Modi stood up and clapped as President Donald Trump raised the issued of radical Islamic terrorism,” the India Today weekly reported. Since the early 1990s, Islamists have killed over 14,000 Indian civilians and 5,000 soldiers, according to official figures.

“Time has come for a decisive battle against terrorism and against those who promote terror. I want to stress on the fact that in this fight, President Trump is standing firmly,” Modi responded in his speech.

Trump “India and the U.S. will together fight radical Islamic terrorism”

The rally took place amid a massive international campaign against Prime Minister Modi’s decision to revoke the historic special status of India’s Kashmir state. The move would open up the Muslim-majority region to Hindu immigration, critics argue.

On Saturday, Democratic presidential contender Sen. Bernie Sanders (I-VT) accused the president of ignoring the plight of Muslims in Kashmir.

“When President Trump meets with Indian Prime Minister Narendra Modi in Houston, we will hear much about the friendship between the American and Indian peoples,” Sanders said at an event hosted by the Islamic Society of North America in Houston. “However, there will be a deafening silence when it comes to a human rights crisis unfolding right before our eyes – and that is unacceptable.”

Democratic Minnesota Rep. Ilhan Omar is also lobbying support against India over the issue. “I am excited to see so many members joining us in calling attention to what is happening in Kashmir.” Omar wrote on Twitter last month. “Please continue to call your member and ask them to speak up.”

President Trump’s appearance at the “Howdy Modi!” rally is a significant victor for Prime Minister Modi ahead of the UN general assembly which reconvenes on Tuesday. With the president sharing the stage with the Indian leader, New Delhi “likely already won the diplomatic battle over Kashmir,” German state broadcaster Deutsche Welle commented.

Modi first came to prominence when he was elected as the Chief Minister of the western Indian state of Gujarat in 2001. A year after he took office, Gujarat witnessed a major Hindu-Muslim riot that took 1,044 lives. The clashes began when a train full of Hindu pilgrims was reportedly barricaded and set alight by Muslim gangs, killing 59 people, most of them women and children.

The Modi-led state government was accused of failing to stop the Hindu rioters. Following the riots, he was declared an international pariah. President George W. Bush’s administration banned him from traveling to the United States in 2005.

After a decade in the political wilderness, Modi stormed the national stage six years ago as a prime ministerial candidate for the nationalist Bharatiya Janata Party (BJP), projecting himself as a tough administrator and economic reformer. Defying media predictions and polls, he won by a landslide in 2014 and got reelected with an even bigger margin in May 2019.

Prime Minister Modi’s push to improve trade and defense ties with the U.S. is rooted firmly in realpolitik. India, flanked by hostile neighbors—to the east by Communist China and to the west by the Islamic Republic of Pakistan—, needs U.S. support to handle geopolitical reality. In recent years, India’s decades-old border dispute with China along its shared 2,200 mile-long border has flared up again.

The Chinese army is close to acquiring a naval port in Pakistan, bringing India’s commercial capital Mumbai and the country’s strategic oil reserves within its striking range. New Delhi is equally worried by China’s Belt and Road Initiative, a multi-billion dollar project to buy off highways and ports all across Eurasia. From New Delhi’s perspective, this looks more like a militaristic pincer movement than a civilian infrastructure project.

Given these geopolitical realities, the U.S. has emerged as India’s partner of choice. With Trump sharing India’s concerns over Chinese expansionism and Islamic terrorism, New Delhi has a friend in Washington.

Very interesting article. I was very impressed watching the Howdy Modi rally yesterday and the support shown for our POTUS in the 50,000 strong audience.

It would be nicer if India would keep its smart people there instead of firing Americans and replacing them with Indian outsourcing companies and their swarm of H1-Bs. Breitbart has coverage of Mike Lees sellout America bill.

I am sure you know that “India” isn’t taking away the jobs.

It’s for the US government and corporations to protect American jobs, not Indian. Or for the customers and voters do demand the same.

You are 100% correct – this IS a sellout of American jobs to less well-paid foreigners …. doesn’t matter if the foreigners are Indian, Chinese, French, Pakistani, etc. It doesn’t matter. This is a kick in the pants to American STEM students. Our politicians have failed us again!!

We live in a country where we are governed by a triple sovereignty: the federal government, the states, and the swamp.

We are in BIG trouble if Trump loses the election.

At this point, the future of our country sits on AG Barr’s shoulders. He’s GOT to start enforcing the law, on every level.