“Eh, if they’re a trash human actively trying to harm marginalized people because of who they are? I think it’s justified.”

College of Charleston Professor Rachel McKinnon, a transgender, found herself in hot water when she tweeted that it’s okay to celebrate deaths of those others find transphobic.

She tried to clarify that she wasn’t celebrating, but that it’s okay if others do.

Things started to heat up Sunday when a Twitter user asked McKinnon if she thought it was OK to celebrate the death of a young person suffering from an incurable brain tumor, alluding to the online feminist influencer Magdalen Berns.

McKinnon stood by her statement, tweeting, “Eh, if they’re a trash human actively trying to harm marginalized people because of who they are? I think it’s justified.”

McKinnon, who is a transgender woman, has called Berns a “transphobe,” someone prejudiced against transgender people, and has repeatedly said on Twitter that the backlash has been fueled by transphobia.

“This is maybe the third time transphobes have mass organized an angry campaign to have me fired or disciplined. It’s never worked before, it’s not going to work now. And now I have the extra protection of tenure,” McKinnon tweeted Tuesday.

Some Twitter users want McKinnon to apologize. Others want her fired.

An online letter that condemned McKinnon’s tweets and called for a formal public apology was addressed to Larry Krasnoff, chair of the college’s Department of Philosophy. The letter was posted Monday and endorsed by more than 300 people. 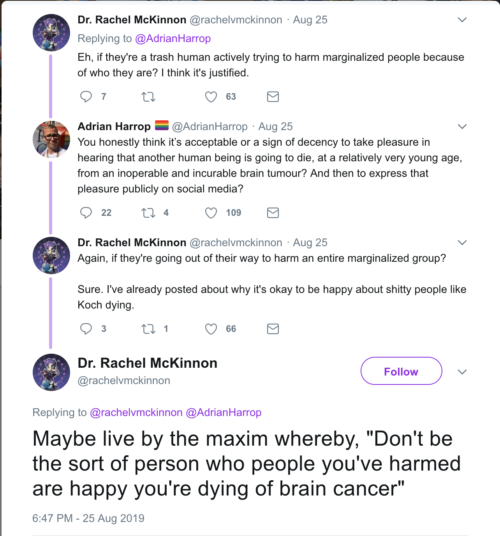 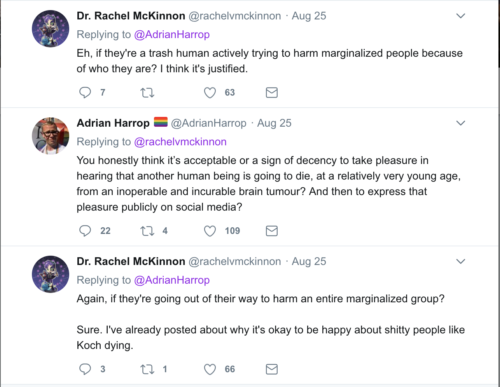 Transsexuality appears to be a mental condition,
Rather than a physical reality.

If you’re going to get giddy about the imminent death of a political opponent, please just STFU if one of your political adversaries looks forward to your death as well.

These people need to be committed for treatment!

I won’t cheer (openly) when transgenders die young, but I’ll be happy to cheer on those that do so!

This is essentially the reverse of what little miss muffaux is saying.

Meh. Given her premise her conclusion makes perfect sense. If someone really is “actively trying to harm marginalized people because of who they are”, then it is absolutely “acceptable and a sign of decency to take pleasure in hearing that” they’re “going to die, at a relatively very young age, from an inoperable and incurable brain tumor”, or from any other cause, and “to express that pleasure publicly” anywhere and everywhere. The Bible says “When the wicked are lost there is song”.

My only quibble with McKinnon’s position is her characterization of Berns (of whom I’d never heard until just now) as such a person; maybe she is, but somehow I very much doubt it. Especially given her sh*tty slur on David Koch, who was one of the best people no longer alive in America.

Why should we be surprised by the uttering of someone afflicted with a serious mental illness?

One of my blue collar friends summarized the transgender issue the other day. “If you have bad piston rings and your engine is burning oil, that doesn’t make it a diesel. It is just a broken gasoline engine that needs to be fixed.” But I guess for some people, believing that you have a diesel is easier and cheaper than actually fixing the problem at hand.

Please don’t capitulate and use the pronoun “she”. He is not a “she”. He is a male, XY.
I would never take a course from such a professor as they don’t even know what sex they are.
How does one trust them to impart any truth to students??

You’ve got your definitions mixed up. This is a transgender MALE. Chemically and/or surgically altering his body, dressing as and assuming the affectations of a woman does not make him one. He’s still male, so the correct definition of him is “a transgender male”.

We don’t treat other mental illnesses by playing along and pretending like it’s perfectly normal to believe you’re Napoleon, or from the planet Zirgon 5, so why do we think such patronizing is appropriate in these cases?

transgenders seem to proclaim that their condition is not an illness (mental or physical), and yet feel they are entitled to prescriptions (hormone therapy) and surgery.

so it seems objectively that these people are seriously ill and that the treatment they desire doesn’t actually help them.

ya know what ya never see?

if a “transwoman” is a woman who “coincidentally” happens to crush biological women in sports , wouldn’t a “transman” be able to compete with biological men?