The Truth About Huey P. Long’s Hypocrisy and Supposed ‘Assassination’

The Truth About Huey P. Long’s Hypocrisy and Supposed ‘Assassination’

“Even if one is unconvinced by the overwhelming evidence confirming Weiss’s innocence, there is simply not enough proof to conclude he was guilty of murdering Long either.” 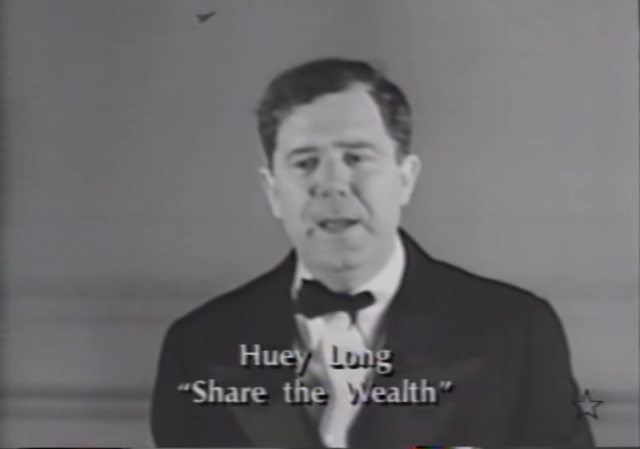 Decades before wild-haired Bernie Sanders, there was Louisiana Democratic Gov. Huey Long. He served as the state’s 40th governor from 1928 to 1932.

Long was a tyrant and dictator. A hypocrite who lectured others, but filled his pocketbook.

He also ruined lives if you betrayed or didn’t show loyalty to him. Even if death Long continues to haunt the family of the man who supposedly assassinated him.

Writing at National Review, Ellen Carmichael, whose family stood opposed to Long and his regime, discusses how corruption, intimidation, and surrounded every bit of Long’s legacy:

Dr. Carl A. Weiss Jr. died on August 1, 2019. It’s not typically considered newsworthy by the New York Times when a retired orthopedic surgeon passes away at the age of 84, but Weiss was more than a physician. He was the son of the man who shot Huey P. Long.

Or so we were taught. As a child growing up in Louisiana in the 1990s, I learned that there was absolutely no doubt that in the 1930s, the state’s best governor and all-around great man died at the hands of a political opponent out for blood. That story, like so much about Long, is a lie.

The myth of Long’s assassination is just one in a long line of tales meant to lionize the former governor and U.S. senator, painting over his lengthy track record of corruption and brutality in his pursuit for power. Huey P. Long, historian Arthur Schlesinger explained in a 1986 Ken Burns documentary about the populist politician, was the closest thing to a dictator the U.S. has ever seen.

“It’s a mistake to regard Huey Long as an ideological figure, a man committed to a program,” Schlesinger said. “I think Huey Long’s great passion was for power and money, and he stole a lot of money and accumulated a lot of power and destroyed all those who got in the way of these two ambitions.”

Many Louisianans have instead chosen to remember Long as the flamboyant politician who gave pencils to poor schoolchildren and built sparkling new bridges across the waterways of the swampy state. Some fetishize his authoritarian regime as the zaniest chapter in Louisiana’s colorful history, ignoring the long-term damage he caused in both governance and reputation to the state.

Long’s Death Was Not an Assassination

Long forced every single public employee to swear allegiance to him. Carmichael’s great-great-grandfather Walter Burke stood as an anti-Longite. He testified against Long, whose henchmen threatened Burke’s family.

Others suffered worse, which led to Long’s supposed assassination:

Though many people were hurt at the hands of Long and his cronies, perhaps none suffered more gravely than the Pavy and Weiss families. Benjamin Pavy was an anti-Longite judge in St. Landry Parish whose judicial district Long gerrymandered in hopes of preventing him from winning reelection. Judge Pavy had planned to retire, but for insurance, Long allegedly began spreading a rumor that Pavy had “Negro blood,” hoping to delegitimize him in the eyes of voters.

On September 8, 1935, Long was making the rounds at the Louisiana state capitol in Baton Rouge, a regular occurrence for the then–U.S. senator who still maintained total control of the state, both through a constant physical presence and by extension through his vast network of political cronies working on his behalf. Dr. Carl Weiss, Sr., a 29-year-old physician married to Judge Pavy’s daughter, lived near the capitol and decided to confront Long after wrapping up his house calls for the day.

When he challenged the Senator about his harassment of Judge Pavy, Long allegedly dismissed the young doctor by using a racial slur. According to sworn testimony consistent with forensic evidence, Weiss responded by punching Long in the jaw. Long’s bodyguards panicked, showering Weiss with bullets. After sustaining 61 gunshots, Dr. Weiss died, leaving behind a young wife and 3-month-old son, Carl, Jr.

During the altercation, Long, too, was shot in the abdomen, but he was well enough to walk down the capitol steps, hail a cab, and ride to the hospital without medical assistance.

According to Bayou Brief, Weiss’s patients testified that he was of sound mind and normal demeanor during his visits that day, and Weiss had even scheduled a surgery for the next morning. Additionally, two hospital nurses revealed in sworn testimonies that Long only said Weiss punched him in the jaw. And most importantly, his bullet wound was inconsistent with the gun Weiss carried as security on his house calls — a gun that Weiss’s son says was not even in his possession during the argument with Long.

It is almost certain that when Weiss punched the senator for allegedly using a slur about his family, Long’s bodyguards overreacted, firing their guns needlessly and indiscriminately into the skirmish. Long was simply caught in the crossfire.

In 2019, Weiss still stands as Long’s murderer despite everyone knowing his innocence. Colonel Frances Gavemberg, a man who fought organized crime “swore in an affidavit” in 1993 that he knew who killed Long. The case reopened in the 1990s, but the police maintained the status quo.

I agree with Carmichael. Louisiana has to exonerate Weiss’s name. His son Dr. Carl Weiss Jr. died last month after spending his life trying to clear his father and wash away the tarnish on the family name.

It is a shame that this has continued for 87 years.

Ellen Carmichael is the president of The Lafayette Company, a political-communications firm, and performs PR work for Legal Insurrection.

Funny that progs pride themselves on “rejecting myths”, yet their pantheon is full of modern ones: Kennedy, Long, McCarthy…. They’re not really as well-informed as they like to think, are they?

Of course they want to dispel myths, its how they can insert their own which are more important to their quest for power.

The left never changes, they are envious of other people’s wealth, and have no qualms about stealing through whatever means. I would have loved to have punched him just for the portion of the speech he was making that I was able to endure.

Funny, Obama and nearly all the leftists running for President are no different from this scum sucker, other than hokum accent. At least Obama hasn’t accumulated ill gotten wealth to himself and bought a property that is on Martha’s Vineyard or something…

Regarding prog myths, how about that “scandal free” Jugears administration? Not one iota!

Per long standing Democrat tradition, Huey is still an active voter and will not be criticized.

His bodyguards and their families also still vote the party line.

In the 80’s I took care of Weiss’ wife. She swore that he had nothing to do with the death of Long. Used to you could go to the capital and see the place where Long was shot. The marble is peppered with lead from all of the bullets. Long did have an abdominal would and was initially under the care of local doctors. But as he was a VIP, only the best would do (which generally are not the best, ask Lincoln). So two surgeon’s from LSU New Orleans were called up. LSU is a great school and if you are hurt is the best place to get immediate care, they will save your life. But the top surgeons likely have not operated in some time. When they explored the abdomen they did not take the precaution of getting an IVP, any intern knows to do that. So, they found a few areas of nicked bowl and repaired that damage, but missed the severed ureter. Three days later Long died of peritonitis, a horrible way to go, but fitting for a politician.

Long and his family where monsters. I have had peripheral association with these people all during my life. My professor in psychiatry was the man who signed the papers to put Earl Long in the mental institution. He was constantly worried about his life.

I think anyone from the public can still see the spot, it’s the vestibule behind the main lobby that leads to the Speakers office, among other things. The walls are still covered with pockmarks, a mute testimony to how wildly Huey’s bodyguards shot. Both of them were carrying “tommy guns”, because Huey liked to look intimidating, just like he was a mob boss. His won arrogance quite literally killed him.

Last time I was there was a few years ago when my daughter was school age, it was spring break and we had driven over from Texas to Southern La. on holiday. We were looking at that room, and this nicely dressed man walked in and said “yeah, that’s where that cat got himself killed.” He then asked him all about our trip, very personable, then told us what he knew of the shooting, about the tommy guns, and some other good stories about Huey. So he said “well I gotta get back to work, it’s been nice talking to you!” and we went back into the main lobby. As we were about to leave, I looked up at the picture of Current serving legislators and found we’d been talking to the Speaker of the Louisiana House. Quite a surprise!

“peritonitis, a horrible way to go, but fitting for a politician.”

Not every politician, most certainly Long deserved what happened. Hillary also appears to deserve the same fate, far too many suicides.

Ellen Carmichael also quotes Lamar White, who is the most unreliable narrator ever.

After 24 years of bush/clinton/bush/obama-clinton, America has become a government and justice system so corrupt even Long would envy it.

Trump is our only hope.

So, what do Louisiana readers here think of Russell Long, Huey’s son?