Trump held a rally on Monday night for Republican Dan Bishop. His efforts paid off. 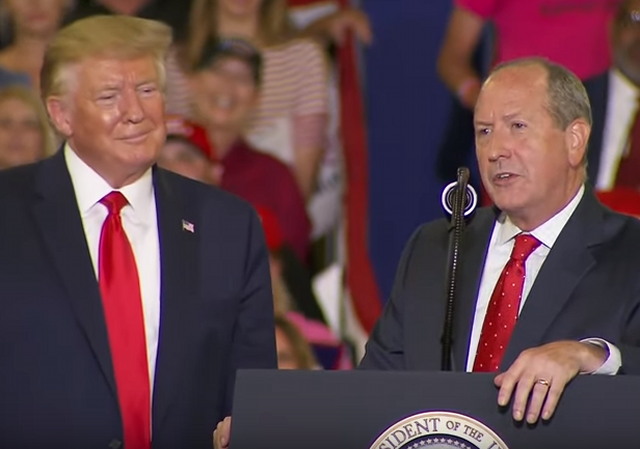 Democrats and the media have been saying for days that this special election in North Carolina would be a referendum on Trump and his chances for winning in 2020.

Trump held a rally in the state on Monday night for Republican Dan Bishop. His efforts paid off, as Bishop declared victory 24 hours later over Democrat Dan McCready.

The two candidates were battling for a seat Republicans have held for decades but which has sat vacant since the 2018 midterm election result — an apparent 905-vote victory for Republican Mark Harris over McCready — was thrown out over credible evidence of election fraud committed by one of Harris’ campaign contractors. Harris declined to run in the new election ordered by the state elections board, and Bishop won the Republican nomination in a primary this spring.

“I’m going to roll up my sleeves and get to work on behalf of the families and the taxpayers of the 9th district.” – @jdanbishop #NC09 pic.twitter.com/hNA1WBMlfk

Mike Pence called to congratulate him:

. @jdanbishop receiving a call from @VP, congratulating him on the win. #NC09 pic.twitter.com/lCZl8UquE3

You can see the results below:

As usual, Trump and Republicans lose by winning, and Democrats win by losing:

It won’t do anything to convince House Rs undecided about seeking reelection in 2020 that they’re in position to win back the majority.

Republicans should feel relieved they avoided a loss, but here’s why Bishop’s 2% win isn’t encouraging: there are 35 GOP-held House seats less Republican than #NC09, per @CookPolitical PVI.

The last word goes to this guy:

It’s always a “narrow” win for the MSM when the GOP wins.

Not so fast.
In a few days the Dem’s will start the “stolen” election crap. Surely there must be missing ballots with so many fewer votes counted, stories from any non-lilly white that they were turned away a from the polls a minute before closing, etc.
They just need a few days to come up with the stories and start rolling them out as needed.

What do you mean in a few days? The fuckers didn’t even wait a day before going on about stealing elections!!

Does this now establish MCready as the front runner to challenge Trump in 2020?

McCready had already been in discussions with the DNC about running for US Senator from NC. Don’t know how this second loss will impact that.

For those who don’t know – McCready was a Young White Male Veteran who ran as a Bipartisan Conservative. And, DJT still beat him.

Losing two “bellweather” elections? Everyone else has only lost one. That makes McCready a superstar!

I love how Wasserman downplays the loss

what does this buffoon thinks is going to happen in a general election setting?

Before the election it was a “Bellweather”. Now it’s an “Outlier”. Didn’t you get the memo?

notamemberofanyorganizedpolicital in reply to snopercod. | September 11, 2019 at 11:39 am

Well it is really a “Bellweather” and a referendum on President Trump.

It’s just that this Bellweather tolls the end of the Democrat Party of Death!

Two points: in a special election, vote totals are not expected to reflect the general election, and if there are large negative Trump feelings in this state, it was not reflected on the Democrat’s voter turnout. Credit Trump for energizing the Republican vote.

Thanks for your input on the ground. Excellent point.

Note about the tainted election – the GOP operative who was indicted for ballot harvesting is the same guy who filed a formal protest about Democrat ballot harvesting in his same county in 2016. Those Democrat harvested votes literally provided the margin of victory for the Democrat Governor Roy Cooper. The losing candidate GOP Pat McCrory announced publicly that he lost because of Democrat shenanigans in Bladen County. But, the Democrats now control the state election supervisory board.

Trump fights like no previous Republican president (including Reagan).

I voted yesterday for Dan Bishop. I was very nervous, as I live in the south Charlotte portion of this district. The money flowing for McCready was evident here all throughout this process. As a new transplant from So CA, I was particularly nervous. Now, I’m hoping more Republicans will see, it’s fighting that’s most needed. Not compromise or walking across the aisle!!

notamemberofanyorganizedpolicital in reply to scfanjl. | September 11, 2019 at 11:40 am

From multiple reports I’m seeing in the past week, lots of CA folk are turning on the Dems.

So…how long before the MSM/DNC axis demands a do-over do-over election in NC-09?

would be a referendum on Trump and his chances for winning in 2020.

Now the dim/libs will be saying ho-humm we didn’t think we had a chance any way…..

“From another commenter, elsewhere – up close and personal.

Worked with Bishop poll volunteers all day. Democrats were so nasty and so smug—they just KNEW they were going to win, as did the Leftist fake media. All of the media was ready at McGreedy’s HQ for massive victory party—and had to pack up with their tails between their legs.

This was to be THE race that brought Trump down—like so many others before. Now that the Right Dan won, we will never hear of this race again,

Trump came to the district and was a YUGE factor, as my new Congressman appropriately pointed out in his victory speech. For those who don’t know any about him, Dan Bishop was our county commissioner, state house member and most recently our state senator. He is a principled conservative and, as importantly, a good, decent, honest man.

So had McCready conceded yet?

Of course, they don’t want to bring up the other NC special election in district 3, where the republican won by over 20%…

District 3 includes the Outer Banks where I am cleaning up after the hurricane. Deplorables everywhere. Beautiful.

Any bets that this “bellwether of Trump support” will end up like the 2017 Georgia 6th special election was a “bellwether” for the GOP in 2018?

The Propaganda machine of the DNC are toting this as it shouldn’t have been close, this despite the huge money difference the leftists spent compared to the Republicans. And McCready was campaigning for a lot longer time too.

The spin machine is saying it shouldn’t have been close, never mind that this result isn’t close enough to demand a recount.

In the special elections, the votes can be tough to count on because they are outside the normal voting schedule, and the GOTV efforts as well as the voter fraud machines of the left work them pretty hard.

Trump’s rally had a positive impact. Just a short time ago McCready was way ahead in the polling, though I have a hard time trusting polls these days. I don’t think they have the validity they used to, and they have been used far too much to push political agendas rather than just being simple polls.

The same exact things were said by the Propaganda machine with The Hispanic Irishman and Cruz, then it got spun the opposite way once the votes didn’t fall as expected.

There is no A in bellwether, guys. A wether is a sheep who leads the flock; he wears a bell so the shepherd can keep track of him and thus the entire flock.

Ahem. A wether is not “a sheep who leads the flock”. A wether is an ex-ram, whether or not it’s a leader. One wether that displays alpha traits (for which it’s no longer anatomically suited) gets a bell on it, and that’s the bellwether. The other wethers and ewes follow it.