#NC09 Special Election Touted as “Bellwether” for Trump in 2020

#NC09 Special Election Touted as “Bellwether” for Trump in 2020 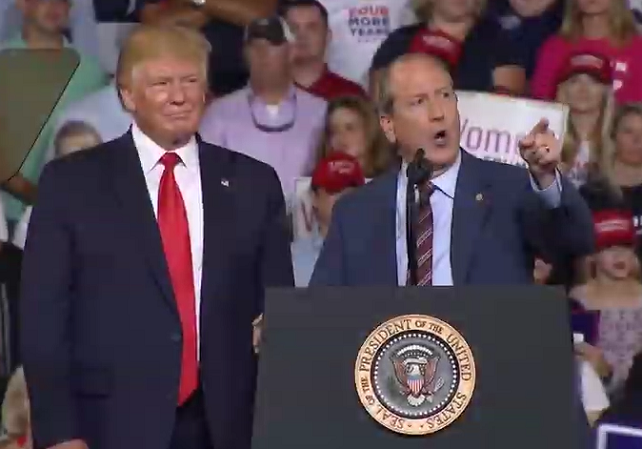 The upcoming Special Election in North Carolina’s 9th district is being touted as a “bellwether” for the 2020 presidential election.  Indeed, NBC News claims President Trump “faces more 2020 danger” if there’s an upset and the Democrat pulls off a win.  Trump won the district in 2016 by double digits.

Republican state Sen. Dan Bishop will face Democrat Dan McCready on September 10th.  There is clearly some concern among Republicans about this special election as both the president and VP Mike Pence will be traveling to the district in support of Bishop.

McCarthy has traveled to the state to help the Republican candidate, state Sen. Dan Bishop, and has pushed his rank-and-file lawmakers to lend a hand. And as he chatted up contributors, he warned that next month’s vote is critical: Following a devastating 2018 election that demolished the House GOP majority, a win in the nationally-watched race would give the party a badly-needed morale boost.

Republicans are funneling resources into the southern North Carolina district as they try to stave off an embarrassing loss in a GOP-heavy seat that President Donald Trump won in 2016 by more than 11 percentage points. With private polling showing a close race between Bishop and Democrat Dan McCready, Trump will travel to the district on Sept. 9, the night before the special election, for a rally in Fayetteville, N.C. And the White House is also planning to deploy Vice President Mike Pence and the president’s son, Donald Trump Jr., before the election.

. . . . Republicans hope that Trump’s involvement in the district — which is filled with the type of white and older working-class voters that powered his 2016 win — will put Bishop over the top.

Roll Call reports that McCready has an edge, but it’s not clear this is so.  Breitbart reports that the sample was heavily weighted with Democrats in a largely Republican district.

Bishop’s campaign has worked to nationalize the race and focus on his support for Trump, and it seems likely that a district that went for Trump by 11 points in 2016 will elect Bishop.

The election is serving as a testing ground for Trump’s 2020 message and strategy. Bishop has worked to nationalize the race, labeling McCready a “socialist” and, more recently, pushing out immigration ads echoing Trump’s rhetoric against Latino immigrants, including a spot in which he criticizes the Mecklenburg County sheriff for not cooperating with federal immigration enforcement officials.

. . . .  The Republican National Committee jumped into the district earlier this month, aiding Bishop’s campaign with get-out-the-vote strategies they plan to deploy in 2020 for Trump. The RNC has spent $1.5 million across the state to date, including spending for another special election on Sept. 10 in solidly Republican territory.

Collectively, the National Republican Campaign Committee and the Congressional Leadership Fund, a super PAC tied to McCarthy, have pumped roughly $4 million into the race. And the conservative Club for Growth has spent more than $500,000 backing Bishop.

Much of this flurry of national Republican financial activity surrounding Bishop’s campaign is based, at least in part, in the head start McCready had in the race.

McCready, a solar energy businessman and a moderate Democrat, has been running here since 2017 and has enjoyed an organizational and financial head start. At the end of June, he had $1.7 million in the bank to Bishop’s $344,000. Pro-Republican outside groups, including the National Republican Campaign Committee and the Congressional Leadership Fund, have sought to level the score by spending more than $4 million attacking McCready in the home stretch.

It’s easy and tempting to shrug off most special elections, but it’s also hard to see how losing this race would be good for Republicans (or for Trump).

. . . . The bottom line: Fresh off losing their majority and beset by a new wave of retirements, Republicans badly need a morale boost. A loss Sept. 10 would mean that they would need to gain 20 seats (rather than 19) to reclaim the House majority next year.

But it’s not just about the House: Trump’s re-election depends on North Carolina, and a Democratic upset would be a genuine sign of danger for the president heading into 2020.

Who cares what those corrupt jackasses ‘tout’?

These “special elections” are especially ripe for voter fraud.

None of them mean anything but it being a local election which means low turn out, and the leftists will pump plenty of people in to steal votes.

I do not trust our electoral system much. Obama “won” in part through the massive fraud machine he had working for him. It didn’t help having McLame running against him, as it was a real hold your nose vote against Obama, for Palin, not for McCain. He had too many places with far too heavily votes in his favor to be realistic. Yet nothing was done.

Bell weather vote? Not likely. More like seeing if the voter fraud will be more than can be turned aside by real votes.

A “do-over” in NC09, but not in the People’s Democratic Republic of California? The elections in Third World thugocracies are squeaky clean compared to California.

The GOPe brought this upon itself by letting Democrats dictate 100% of the terms. If McCready loses there will be another election…and another…and another.

After the 2018 midterms I don’t take anything as a “bellwether” for 2020. I got all excited in 2010 when the Obama people didn’t show only to get trounced in 2012 by an incumbant President. For whatever reason the out-of-power party shows up for these and the in power party doesn’t and then BAM after the incumbant President runs a full campaign the party in power has electoral power again.

Horse hockey. Every election since 2016 has been touted as a bellwether election potentially forecasting Trump’s imminent doom. It’s an offcycle election after a primary that had too many republicans….so no larger group could get behind the eventual primary winner.

Following Republican loss of House in 2018 midterms and Trump’s current losing polling vs. Biden (-9.5% on average), I’m concerned Trump is not electable in 2020. Many of his policies are more popular than he is.

Nothing against the 3 you mentioned. BUT, I can guarantee if Trump somehow gets thrown overboard, many in the base will stay home, and Trump’s replacement wiil get shellacked worse than DJT ever could.

If Trump supports his replacement, that should help with his base.

I cannot abide either Rick Scott or Nikki Haley and would vote for neither in a GOP primary. Ever.

The thing about bellwethers is that they’re, well, wethers. Nobody wants to be one, if you know what I mean.

nikki haley? really, the tea party candidate that immediately renounced the tea party policies after the tea party elected her. if you think I would vote for her your crazy, i’s an American not a republican.

I have a prediction; 100% chance that Dan will win the election. I’d put all my money on it too.

There’s real money in election polling for somebody as smart as you. :}