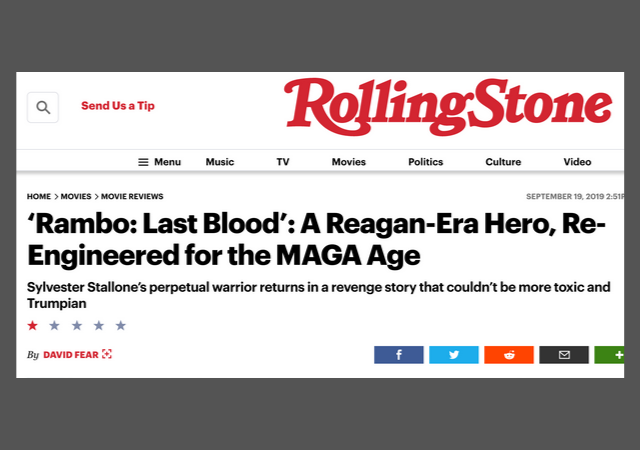 Going into Rambo V, I had assumed I was in for a rough time. Most of the reviews excoriated the film and left me worried I was about to waste my money on the ticket.
From a critical standpoint, I can definitely see where some of the criticism is coming from. It looks cheap, it doesn’t have much narrative flow, the characters are dull and it’s clearly aping off the style of Logan. The first hour is boring and it’s only somewhat redeemed by it’s final 20-minute Home Alone-esc murder sequence.

At the same time though, the theater goers watching the movie with me were totally into it. The reaction to it seems to be roughly the same as the fourth film from 2008, Rambo. That film was an ultra violent, scaled back 80’s style action film with all of the baggage that comes with it and it was quite polarizing. Cinephiles don’t like it but it has a consistent cult following who stand by it being a good film.

Rambo: Last Blood is probably going to develop the same reputation. I’m sure many film fans would love it if this film did for John Rambo what Rocky Balboa and Creed did for Stallone’s other screen persona but honestly this doesn’t feel inappropriate. John Rambo isn’t a character designed to learn. He’s a machine of war who expresses himself through violence to the bitter end.

While most of the criticism likely lines up with my own critiques of the film, the PC brigade running Rotten Tomatoes did their usual review bombing the film with negative reviews while the user rating immediately shot up high because every fan of the Rambo series got exactly what they wanted out of the film.

Much like Dave Chapelle’s Sticks and Stones, the movie seems to be hitting a nerve with progressive critics who consider the film retrograde and racist.

Bounding into Comic provided an excellent summary of mainstream reviews:

Peter Debruge at Variety describes the film as a “cruel and ugly showcase of xenophobic carnage.” He goes on to accuse the film of racism, “screenwriters Matthew Cirulnick and Stallone adopt the racist view of Mexicans as murderers, drug dealers and rapists, devoid of cultural context or exceptions, beyond the “independent journalist” (Paz Vega) keeping tabs on their whereabouts.”

The Guardian’s review by Peter Bradshaw makes it clear their review is all about politics in the first sentence.

“This massively enlarged prostate of a film can only make you wince with its badly acted geronto-ultraviolence, its Trumpian fantasies of Mexican rapists and hilariously insecure US border, and its crass enthusiasm for rape-revenge attacks undertaken by a still-got-it senior dude, 73 years young, on behalf of a sweet teenager.”

Rambo has long been a symbol of imperialistic rage, and “Last Blood” is no exception. Transplanting the action to Arizona provides the natural setting for a border drama that plays into Trump-era fear-mongering, right down to its ominous shot of a border wall, as Rambo heads south in search of justice.

Edward Douglas at ComicsBeat makes it clear his review is all about politics writing:

“Maybe I never got into the whole Rambo franchise, because when Stallone introduced the character back in the ‘80s, it contributed to all the “Rah! Rah! USA!” stuff that was going on under Reagan. Whether on purpose or not, Last Blood does something similar for the racist red hats wanting to “make America great again,” despite the presence of a few underused good Mexicans.”

I recommend readers read the full article and each summary. The sheer breadth of major film critics from reputable websites like IGN, Indie-wire, Variety and Rolling Stone excoriating this film on moral grounds is astonishing.

None of this criticism is dramatized in the movie proper. It’s not even implied subtext. The movie is just about one man taking revenge on the Cartel in brutal fashion. Even the movie’s allusions to the border wall are just window dressing.

Unless the writers of these magazines think that the Cartel is a vital or culturally authentic expression of Mexican culture or outright deny the existence of crime problems on the US-Mexico border, I can’t imagine what these writers are on about beyond Trump-Derangement-Syndrome.

Last Blood a sleazy, grindhouse crowd pleaser that relishes in its character’s ability to dish out unrepentant violence and it’s clear a lot of people love it flaws and all.

Lefties did the same to Death Wish with Bruce Willis (2018). That in and of itself is a sign certain that the movie was a fun watch. And it was.

btw, the 1974 original, and sequels, with Charles Bronson is also satisfying.

I like your headline, so I will skip the spoilers and see it.

So I’m guessing this isn’t going to appeal to the pajama boy set? Cool.. I’ll make sure I see it.

I will wait for it to come to HBO in 6 months.

Panned on Rottentomatoes will be as lucrative as Banned in Boston.

The critics always hated Rambo though. This is not a new phenomena. I don’t believe the favorable ratings for the first one. I feel like those reviews were revised fifteen or twenty years ago because that movie was too good and they were embarrassed. As you can see with Chappelle’s reviews, the critics are no longer embarrassed to toe the party line over acknowledging quality entertainment.

Excellent point. Recall that Ronald Reagan was a big fan of “First Blood,” and, that the Reagan-hating media elites (the precursors of the even more fanatical and unhinged Trump-haters of today) soon adopted and used “Rambo” as a pejorative descriptor to describe someone (usually a Republican politician) who allegedly was overly aggressive and jingoistic.

I’ll amend my comment to note that I think Reagan was a fan of the sequel film, “First Blood: Part II;” not the first film. But, his affinity for Rambo, as a character, was well-known.

I grew up on the cartoon modeled after First Blood: Part II, so it was always my favorite despite it being considered a lesser film than the first.

They hated “Red Dawn” too.

There are no “movie critics” anymore.
Nowadays we get woke box checkers who care more of the skin color and sexual preference of the cast than whether the cast is any good at you know – acting. .

The Left’s “woke” totalitarianism has ruined everything. Formerly apolitical cultural spheres, such as film, theater and sports, must now be scrutinized and obsessed-over, to discern whether they align with the Left’s orthodoxies, to the letter.

Sounds like it will be a refreshing change from the current content quota/ check box storyline that is now de rigeur (if not required) in the advertising and movie industries.

In other words, it sounds like in this movie we’ll NOT be subjected to:

1) At least every third couple being interracial;

2) Gratuitous gay characters / sub-story line taking up far more time in the presentation than the 2-ish percent that the “Alphabet People” constitute in the population at large;

3) Women in the drivers seat, with the man in the passenger seat;

4) All White males being either the bad guys or dummies.

I just might have to make one of my (very) rare trips to a movie theater, just to send a message to the usual suspects.

Now, being serious: I agree with your comments. And I’m Twoish. I’m as sick of the contrived nonsense as anyone.

Also, how myopic and utterly stupid are the critics’ construction of the film’s portrayal of Mexican cartel members as bad guys? As if this representation has no basis in fact?

I mean, are these dopes unaware that hundreds of thousands of Mexicans have been killed — often in horrific and sadistic ways — as a result of cartel violence, in Mexico? It’s not as though Stallone and his co-writer are contriving this material out of thin air — the cartels exist, and, the violence that they deploy against innocents is real.

The self-righteous, holier-than-thou Leftist morons once again prove that they are the dumbest, most self-aggrandizing idiots on the planet.

Lastly, I’ll simply point out that Leftists’ penchant/need to constantly politicize everything under the Sun, and, to impose their political “purity” tests on everyone and everything, is utterly poisonous and unhealthy, to society as a whole. It smacks of totalitarian intolerance and religious fanaticism.

The sheer breadth of major film critics from reputable websites like IGN, Indie-wire,

You want to try that one again?

They can stay home in their mothers’ basements and play video games. The rest of us will go see the movie.

I’m not familiar with this concept.

As wee peer through the twilight oculus… Ah, RollingStone, a measure of privacy. And a reminder, there were no children selected… planned, no abortion fields opened, in social justice campaigns.

lets not kid ourselves here.

Sylvester Stallone is about as left as you can get without standing up on a soap box and proclaiming his hate for anyone who isn’t Hollywood.
he has advocated for abolishing parts of the constitution like the 2nd amendment, while having a carry permit himself.

I will also add that his idiotic movies are so far removed from any sense of reality that it’s just gratuitous and fantastical violence.
I don’t care for the actor’s politics and when I have to think about his willingness to take a dump on my civil rights, it frames everything he does in that same context, for me.

so you folks enjoy that movie. I’ll spend that money on ammo and spend that time on the range with a ruger precision rifle and my son. we’ll both be the better for it.

Any target less than 600 yards is sandbagging especially if the 6.5.
As for optics… now that is an interesting line of conversation.

Movie critics are reviewing entertainment based on a political agenda.

Paying customers are reviewing entertainment based on how well they were entertained.

Dave, at least the Mexicans were being played by Mexicans. Shouldn’t he get a Woke Credit for that one?