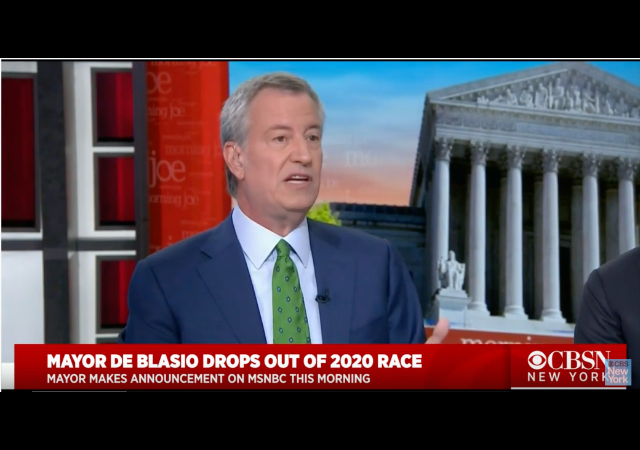 New York City Mayor Bill de Blasio finally pulled the plug on his 2020 presidential campaign because of “his struggles to qualify for the party’s primary debates.”

He struggled to qualify because he rarely polled over 0% if ever. The fact is no one wanted him to run.

De Blasio made the announcement on Morning Joe:

“I feel like I have contributed all I can to this primary election, and it’s clearly not my time, so I’m going to end my presidential campaign,” de Blasio said in an interview on MSNBC’s “Morning Joe.”

“We have a chance to get it right in 2020,” de Blasio added. “Whoever our nominee is, let’s make sure we’re talking to the hearts of working people.”

De Blasio said he would not be endorsing any of his fellow candidates “today” but that he would “think about” doing so in the future. He added that he would “of course” support “whoever the eventual nominee is.”

Oh no, really big political news, perhaps the biggest story in years! Part time Mayor of New York City, @BilldeBlasio, who was polling at a solid ZERO but had tremendous room for growth, has shocking dropped out of the Presidential race. NYC is devastated, he’s coming home!

I guess de Blasio thought he had a chance or that people actually cared about his campaign because he wrote an extensive swan song at NBC News. He explained why he dropped out and his plans to help New York City.

The letter and announcement prove that de Blasio just does not get it. No one likes him. I spoke to a few friends in NYC and the surrounding areas about de Blasio. They said people basically voted for him because they didn’t have another option.

I mean, the odds came out against him before he even announced his campaign in May. A Monmouth University poll taken before de Blasio’s announcement found the mayor “with a negative net favorability rating (-6 points).” He was the only Democrat to land in the negatives.

CNN posted an article on the day he announced titled “The math is against Bill de Blasio in 2020.” A poll around that time found 65% of New York state Democrats would be unhappy if de Blasio became the 2020 Democratic nominee.

The dislike for de Blasio has come to the forefront since he announced his campaign in May.

The relationship between de Blasio and the NYPD hit the ultimate low point in August. The union voted no confidence in de Blasio and the commissioner due to the firing of Daniel Pantaleo. He is the officer involved in the death of Eric Garner back in 2014.

NYPD officers traveled to Detroit, MI, for the second Democratic debate. They stood outside in an effort “to convince our mayor to come back to the city and do the job he ran for rather than quit and start

A source told The New York Daily News on August 4 that “de Blasio ordered the NYPD Executive Protection to move his daughter out of her apartment.” The source described the situation as “abuse of city resourced.”

New York City residents plastered MISSING posters of de Blasio as he toured the country on his campaign. To make it worse for him, the majority of those events only drew around 15 people.

Earlier this month, reports came out that de Blasio only logged seven hours of work in May, the month he announced his campaign. I haven’t seen the months since, but I bet they’re about the same as May.

So this means Bill can return home to Managua?

De Blasio was running for president?

notamemberofanyorganizedpolicital in reply to Brave Sir Robbin. | September 20, 2019 at 4:57 pm

Well he sure can’t be running for mayor of the big apple.

FNC is reporting there is extensive wailing and gnashing of teeth in NYC at the news that Warren Wilhelm is returning to the city to take up his duties as Mayor full time.

Sad news, indeed! NYC was safer in his absence….

Can Bill also end his disastrous Mayoral career? That would be a true public service.

Because I don’t watch Morning Joe and the clip attached wasn’t very long, who among you will tell me how devastated Joe and Mika were at the news! Did Mika go into her grimace face?? ??

I guess the contributions tapered off so there is no need to go on. He just pockets what’s left and is ahead of the game.

“Tremendous room for growth… “
Love it! No one trolls like the President.

So sad for NYC that he’s back

Colin Kaepernick has a better chance of getting an NFL contract than DeBlasio has of anyone asking for his endorsement.

Trump’s tweet alone is reason enough to vote for him.

Obama aside, have we seen a more selfish, oafish, incompetent freak in such a high office?

I guess he’ll have to go back to being Mayor.
I’m sure in the coming weeks we’ll see photos of him out and about NYC, doing Mayor stuff.
Because he was such a hands on Mayor before he decided to run for President…