Posters Looking for a “Missing” de Blasio Plastered Around NYC

Posters Looking for a “Missing” de Blasio Plastered Around NYC

“Last seen embarrassing himself in Iowa, New Hampshire and South Carolina. If seen please tell him to immediately return to New York and do the job he was elected to do.” 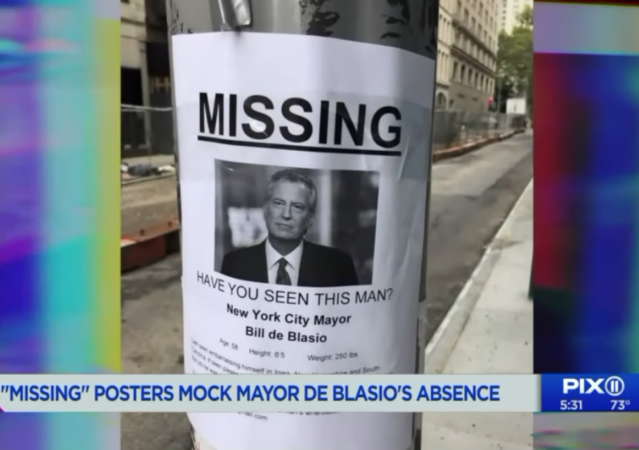 Have you seen this man?

Posters seeking information on New York City’s missing Mayor de Blasio, who has been busy campaigning for president, have popped up around midtown NYC.

“Last seen embarrassing himself in Iowa, New Hampshire and South Carolina. If seen please tell him to immediately return to New York and do the job he was elected to do,” read the posters.

The posters were created by Jason Selvig who told the New York Post “he launched the campaign in an effort to convince the mayor to step away from his 2020 White House bid — amid various polls showing him at zero percent.”

“I want to use this platform to formally ask Bill de Blasio to use his CNN town hall on Sunday night to withdraw from the presidential race and to apologize to New Yorkers on live television for the embarrassment he has caused to the city with his disastrous campaign,” Selvig said.

As of Saturday at 1:30 p.m., the “de Blasio for resident” account had yet to receive a single email in support of his presidential bid, according to Selvig.

This Selvig guy should be glad de Blasio is not around. If he was, he’d probably just be pissing away more of NY taxpayers’ billions, on his corrupt wife’s phony and unproductive (of any actual results) programs.

Since de Blasio is so completely incompetent and corrupt at doing the job of mayor, it’s probably best to just leave him lost.

Why on earth would NYC even want Bill de Blasio back when they fortuitously managed to get rid of the malingering blowhard a year and a half early? What….. there’s no vice-Mayor and/or plenty of other city authorities to whom city function(s) and responsibilities are delegated, and who can work on pretty much any and all issues and address them in NYC? Criminy.

I don’t think Furhur De Blasio is the only mayor that needs to take that message to heart.

Like the joke: Cop asks the husband why he didn’t report the wife’s credit cards stolen? He told him: The thief spends less than she did.

We know it’s a given all the Dem runners are collecting voter data to give their DNC.

If de Blasio becomes president, perhaps he can put wifey in charge of the deficit. After all, she made nearly a billion dollars disappear in New York City.

Now THAT’s funny, no matter who you are!

NYC should be happy the SOB is out of town.