No Safe Spaces Documentary Announces Release Date, Gets into Ratings Battle with MPAA

No Safe Spaces Documentary Announces Release Date, Gets into Ratings Battle with MPAA

The film features interviews from multiple academics and celebrities across the political spectrum including Ben Shapiro, Dr. Jordan Peterson, Alan Dershowitz, Cornel West, Van Jones, and Tim Allen all speaking on the issue of free speech. 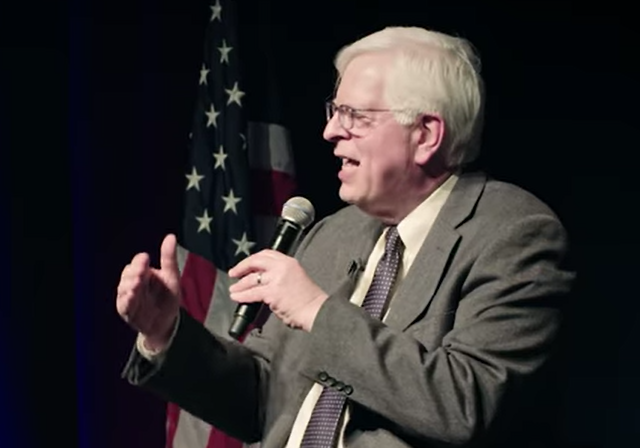 Dennis Prager and Adam Carolla’s long in production documentary No Safe Spaces will finally be coming to theaters this fall.

On October 25th, the film will be released although it’s not clear whether this is a limited or wide release. The announcement on Facebook mentioned “Details and cities to follow” which could mean the film will be touring in a limited release although we’ll know for sure when tickets go on sale.

The film started production in 2017 and is said to cover the widespread phenomena of conservative and moderate speakers being chased off of college campuses by far-left anti-free speech protesters. The film features interviews from multiple academics and celebrities across the political spectrum including Ben Shapiro, Dr. Jordan Peterson, Alan Dershowitz, Cornel West, Van Jones, and Tim Allen all speaking on the issue of free speech.

Unfortunately, the release is dealing with a minor setback. The MPAA has given the documentary a rating of PG-13 against the wishes of the filmmakers who were hoping for a PG rating.

As reported by the Hollywood Reporter:

The movie stars comedian-podcaster Adam Carolla and radio talk-show host Dennis Prager, the latter of whom sent a letter to the MPAA to protest the rating, which is largely based on a 30-second animated clip of “Firsty,” a walking, talking embodiment of free speech who gets shot up with bullet holes.

“Any kid who sees it will probably laugh,” Prager wrote in his letter to MPAA head Charles Rivkin. Prager also notes that Firsty isn’t killed, and he says that he seeks “with all of my work to make content that is suitable for all ages,” though he worries the more restrictive rating will discourage some parents from taking their children to see the movie.

“But when it comes to Firsty, we would ask that you reconsider and allow the scene to remain and still achieve a PG rating so that we can reach the widest possible audience. A PG-13 rating would not reinforce people’s faith in MPAA’s ratings,” Prager wrote in his letter to Rivkin, obtained by The Hollywood Reporter.

Insiders say the MPAA called the scene where Firsty is shot up “way too strong and violent” for a PG rating.

The decision is a minor setback for a film that Mr. Prager hopes to be family viewing. While the decision doesn’t appear as nakedly political as Unplanned’s R-rating by the MPAA earlier this year, this situation can hopefully be changed prior to the film’s release.

Hm, if he didn’t want to risk a PG13 rating, maybe he should have avoided cartoon bullets. Yeah those were in everything from Bugs Bunny on up, but the pretense of being kiddie-safe has been dialed up today. Of course it’s hypocritical, kids may see no fake guns, but they can ‘snuggle’ with real child sex groomers at the library.

I feel sorry for today’s kids …. I assume they can’t see Wile E. Coyote being clobbered with an anvil.

Roadrunner cartoons must be rated R.

Charles Rivkin: Another Leftist of Eastern European Jewish ancestry doing his part to subvert America with his Marxist values.

Dear God, what do they rate roadrunner cartoons, these days?

It’s actually just fine because it’s metaphorical. It’s all about a bird, which represents the oppressed people of color throughout the world, being hounded by a coyote, who represents White Men.

The poor idiot supremacist canine does everything wrong, even though he has unlimited funds to by ACME products. The proletariat always wins in the end.

Probably have to find them on a pay channel. I dont’ think they show “real” cartoons anymore. They’re all SJW sermonizing. Worse brainwashing than school.

Ben Shapiro is a con artist. This guy preaches about freedom of speech while banning users on his own website for calling him a fraud.

This is the guy who apparently has never heard of Spygate. His TDS is almost as bad as Don Lemon’s.

Ben’s a bit thin skinned. That’s because he’s a moral man but he preaches a bit too much and he’s a never Trumper and his brand of polticking is the one that failed us for so many years.

He can’t face that it’s time to take the gloves off as our opponents are going by any rules except the ones they’ve made up. And no one wants to play that game anymore, we want to win.

So much winning! And that’s the thing that really ticks the Never Trumpers off!

Do “Never Trumpers” acknowledge the good things Trump does? Shapiro has a regular segment on his podcast he calls “Good Trump, Bad Trump” where he highlights things Trump does that he agrees and disagrees with.

I guess I qualify as a “Never Trump” guy, having voted against him on grounds of character (via a write-in, not a vote for the Hildebeast) last time and my intention to vote against him again next year, also via write-in.

But I laughed HARD when he won, and there are things I agree with him on, which of course gets me called all kinds of names by “progressives” as they insist that they “think for themselves.”

Progressive fascists is a more appropriate term for these Marxists.

Do you live in a state that is reliably Dem or Republican, where your vote doesn’t affect the Electoral College vote?

Yeah, I live in WA State, which is run from Seattle. This state has 0% chance of going R. In ’16, the number of write-in votes set a record, but it was a drop in the bucket totals-wise. The only consolation is that I knew I’d have clean hands when I wrote in Vermin Supreme. LOL