Bloom, Gloria Allred’s daughter, told Weinstein she felt “equipped to help you against the Roses of the world, because I have represented so many of them.” 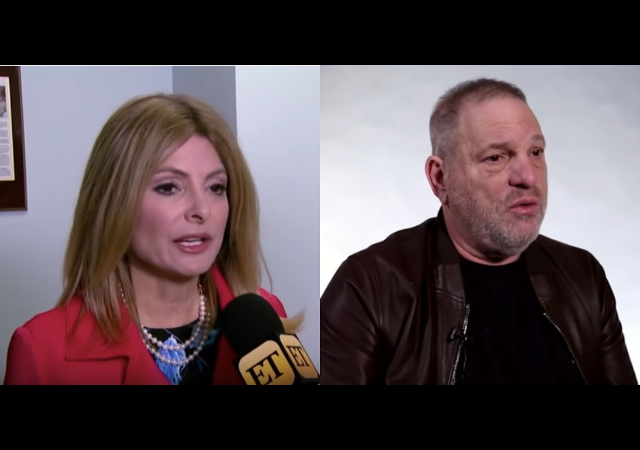 New York Times reporters Jodi Kantor and Megan Twohey dropped the bombshell on Harvey Weinstein two years ago with a scathing article filled with accusations from actresses. They described horrific alleged sexual misconduct by the once-powerful movie producer, which led to the #MeToo movement.

Kantor and Twohey detailed their investigation in a new book called She Said: Breaking the Sexual Harassment Story That Helped Ignite a Movement.

One shocking detail came to light in the book. Victim rights attorney Lisa Bloom, the daughter of Gloria Allred, sided with Weinstein. She offered to help him ruin the reputations of the women who accused him of sexual assault, sexual harassment, and rape.

Yes. The daughter of the most notorious victim rights attorney Gloria Allred offered to help Weinstein ruin these women.

She also offered her law services since it could help his defense. From The New York Times (emphasis mine):

Allred’s daughter, the lawyer Lisa Bloom, a prominent victims’ rights attorney, was working behind the scenes with Mr. Weinstein — at a rate of $895 an hour — to quash the journalists’ investigation and thwart his accusers. In a confidential memo to Mr. Weinstein that Ms. Bloom wrote in December 2016, which is reproduced in “She Said,” she offered to help him damage the reputation of one of his accusers, Rose McGowan, and portrayed her background as a victims’s rights advocate as an asset.

“I feel equipped to help you against the Roses of the world, because I have represented so many of them,” Ms. Bloom wrote, before laying out a multistep playbook for how to intimidate accusers or paint them as liars. One of Ms. Bloom’s suggested tactics for undermining Ms. McGowan: “We can place an article re her becoming increasingly unglued, so that when someone Googles her this is what pops up and she’s discredited.”

Bloom and Weinstein went to the Times the day before it published the expose on him. They had opposition research on his accusers, including supposed proof that Ashley Judd is “unreliable and mentally unstable.”

Bloom released a statement on Sunday. She expressed sadness and regret while apologizing profusely to the women in the 2017 Times article.

While painful, I learn so much more from my mistakes than my successes.

To those who missed my 2017 apology, and especially to the women: I am sorry.

Here are the changes I’ve made to ensure that I will not make that mistake again. pic.twitter.com/FSSl3qrFjQ

Allred “helped negotiate a settlement that muffled one of Mr. Weinstein’s victims in 2004, taking a 40 percent cut.” Her firm also helped “on settlements that silenced victims of Larry Nassar and Bill O’Reilly.”

It turns out Kantor and Twohey received a lot of help from Irwin Reiter, one of Weinstein’s longtime accountants. He tried many times to speak out about Weinstein’s behavior, but it never worked. He gave the two authors a “memo from an employee who described Weinstein’s routine harassment of junior female employees and actresses.”

But maybe Reiter’s protests did not entirely fall on deaf ears:

Two years before the allegations of sexual harassment and abuse against Harvey Weinstein became public, his own brother and business partner, Bob Weinstein, confronted him, pleading with him to get medical treatment for what he described as many years of “misbehavior.”

“You have brought shame to the family and your company through your misbehavior,” Bob Weinstein wrote. “Your reaction was once more to blame the victims, or to minimize the misbehavior in various ways. If you think nothing is wrong with your misbehavior so in this area then announce it to your wife and family.”

Bob also said he “mistakenly” viewed Weinstein’s disgusting behavior “as sex addiction” due to his past substance abuse. He admitted to journalists that the ordeal wore him out and he surrendered.

She Said also reveals one of Weinstein’s accusers who refused to speak to the press for the past 15 years:

“She Said” similarly discloses the identity of a Weinstein accuser who has put off inquiries from journalists for 15 years, Rowena Chiu, a former assistant at Miramax who received a settlement in 1998 after Mr. Weinstein allegedly assaulted her in a hotel room. In Ms. Chiu’s account, which she shares in detail for the first time, she describes being silenced by a restrictive nondisclosure agreement and lured back to a job at Miramax in an apparent effort by Mr. Weinstein to keep her close. She struggled with depression and attempted suicide. She stayed silent for nearly 20 years, even declining to tell her husband about the predation or the settlement. (Mr. Weinstein has disputed her story.)

The book comes out on Tuesday.

The reputations of Allred and Bloom are such that whenever they accuse somebody, I immediately believe them to be innocent.

The only surprising thing about this story is – is there anyone who is actually surpised by this? Bloom and Allred and their like are exactly the people I (and most others) always thought they were. They literally will do anything for a buck.

Business as usual. Leftists use people. They manufacture victims (Harvey is now a victim) and exploit them ($$). A sociopath is quite comfortable destroying other people (Harvey’s real victims) if the sociopath gains power or money. Ethics is for losers think they.

These people are consistent. And the “woke” admire them. Disgusting.

Well, she is on the record as doing the same to him:

“California lawyer Lisa Bloom’s efforts included offering to sell alleged victims’ stories to TV outlets in return for a commission for herself, arranging a donor to pay off one Trump accuser’s mortgage and attempting to secure a six-figure payment for another woman who ultimately declined to come forward after being offered as much as $750,000, the clients told The Hill.”

Lisa and her mother Gloria undoubtedly believe that they are capitalists and have cornered the market.

#MeToo #HerToo #SheProgressed Special and peculiar interests are not sexist. The Pro-Choice quasi-religion (“ethics”), not limited to selective-child and recycled-child, is affirmative evidence of toxic mental attributes present in both sexes.

Gee, when I took ethics, the phrase “represent clients zealously within the bounds of the law” did not include engaging in defamation.

The first day of my ethics class our professor (a prominent D.C. lawyer) walked in and said, “The most important thing you should learn in my class is that if someone must go to prison, make sure it’s your client and not you.”

The first day of my ethics class our professor (a prominent D.C. lawyer) walked in and said, “The most important thing you should learn in my class is that if someone must go to prison, make sure it’s your client and not you.” I always found that to be excellent advice.

This woman is the very definition of a shyster.

A loathsome mother and daughter duo.

The rotten apple doesn’t fall very far from the poisonous tree. Put another way, like mother, like daughter.

These two are money grubbing publicity seeking courtesans de graft. They’ll milk a situation for what it’s worth–and then depart. If you were able to take a survey of their former clients, used and disposed of like a snot filled Kleenex, you’d find a disappointing set of outcomes–for the client.

That’s particularly true of Allred. As for Bloom, she’ll take any position or do anything you want for $895 an hour. In that regard she’s probably a little more expensive than her mother.

Typical lawyer, ANYTHING for a buck!