Two of the most *likable* women 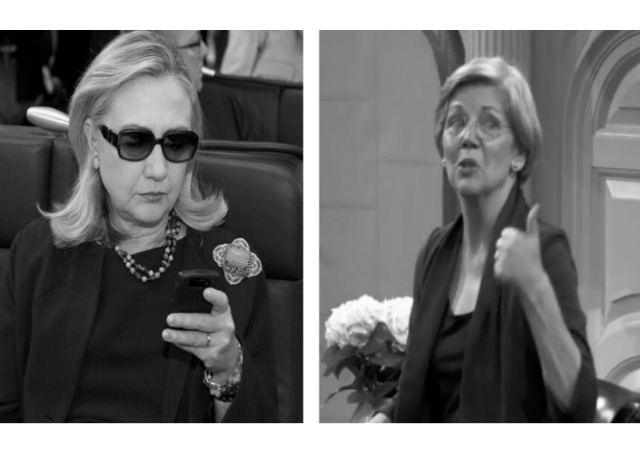 Two of the least likable, least trusted women in Democrat politics are reportedly “becoming closer,” even colluding behind the scenes.  Imagine a Hillary 3.0 run with Sen. Elizabeth Warren (D-MA) as the 2020 Hillary.  What can go wrong?

Elizabeth Warren’s team doesn’t want to talk about Hillary Clinton, but that doesn’t mean the 2020 presidential candidate isn’t talking with her party’s 2016 nominee.

The two women have kept a line of communication open since the Massachusetts senator decided to run for president — though only a conversation around the time of Warren’s launch has been previously reported — according to several people familiar with their discussions who spoke to NBC on the condition of anonymity because of the political sensitivity of private interactions.

It’s not clear from the report who is using whom, but with these two, it’s likely both?

Clinton is a fraught subject for the Democratic contenders — perhaps for none so much as Warren, who, in the shadow of Clinton’s defeat, is seeking to become the second woman to win the party’s nod and the first woman elected president.

. . . .  More immediately, Warren would no doubt like to win over support from Clinton voters, particularly women — and women of color — as she battles Sen. Bernie Sanders of Vermont, former Vice President Joe Biden and the rest of a field that trails the top-tier triumvirate.

But Warren has made little effort to publicly highlight ties to Clinton, who is perceived by many on the left as too centrist and who was defeated in an election Clinton and her allies believe was heavily colored by President Donald Trump waging a misogynistic campaign. To the extent that Democratic primary voters fear a repeat scenario in 2020 — and to the extent that she’s competing with Sanders for the votes of progressives — there may be good reason for Warren to keep her distance from Clinton publicly.

At the same time, people who know and like both women say there are more similarities between them than some of their partisans would like to admit. Each is a policy powerhouse with an uncommon command of details, and possess the ability to master new material quickly with a deep intellectual curiosity. Like Clinton, Warren focused the early part of her campaign on developing a raft of policy proposals and rolling them out.

More important, an explicit or implicit blessing from Clinton could help Warren if she finds herself battling for delegates and superdelegates at a contested Democratic convention next summer.

It is clear that comparisons between the two are not complimentary . . . at least among the right and center-right (i.e. voters the Democrat nominee will need to win in a general election).

In fact, they are so alike in terms of agenda and personality (or lack thereof) that the left works overtime to assure us that they are nothing alike.  Not at all, and you’re sexist if you think otherwise. Because of course.

Let them collude, so long as they stay out of our hair.

I wouldn’t go into mourning if I read a headline stating that both of these miserable and worthless crones had drowned in a vat of chardonnay.

I’d bet all the tea in Communist China that it isn’t Hillary who’s being used by Pocahontas. I wouldn’t trust Warren to know which side of a stamp to lick.

What is “democratic” about either of these 2 bitches?

Mark Sanford could not agree, more. There is NO chance in hell of him ever being elected to anything… but he mmight have a chance, at least with people who know nothing about him, against a paint suit or a feather.

Didn’t Sanford have a South American girl friend? Better that he might rekindle his romantic life and spare South Carolina the shame and embarrassment of his despicable predilections.

Give our best to Lamont.

Clinton/Warren 2020 – Two epic liars to run the highest office in the land. What could possibly go wrong?

A witch and a bitch …. but I’m not sure which is which!

“Liz, lemme show you how to win”

A small mod to that is “Witch is the Bitch?”.

“….. . . . More immediately, Warren would no doubt like to win over support from Clinton voters, particularly women — and women of color —….”

Oh, so those are different entities? What colors? Black, brown, yellow, red? All the rest are white?

I can’t see Hillary being the least bit interested in any project which isn’t geared toward making her President. I doubt that anything else matters to her at this point.

If I were Lizzie Warden I would be very careful about getting into bed with Hillary. I suspect Hillary might be angling for a VP spot. Would YOU want to be the only person standing between Hillary Clinton and the White House?

The Madam Boozer-Loser and Fauxcahontas. Two POS that deserve each other.

What advice does hillary have for Pocahontas? “After you lose, long walks in the wood followed by vodka binges until you blackout are what got me through. And hitting bill across the head with a lamp.”

“Each is a policy powerhouse with an uncommon command of details, and possess the ability to master new material quickly with a deep intellectual curiosity.”

The above NBC News sentence just broke the internet.

What a joke. The sentence continues:

“Like Clinton, Warren focused the early part of her campaign on developing a raft of policy proposals and rolling them out.”

Warren’s free shit of the week policy proposal roll out. It doesn’t take much intellectual curiosity to propose one tax payer funded giveaway after another.

Too true. But, what’s funny is how the slavish, water-carrying Mainstream Media propagandist-lackeys pen so many fawning puff pieces waxing rhapsodic about how Warren is allegedly the “intellectual powerhouse” in the race, a “super-wonk,” etc., when, in actuality, she is merely yet another in a long line of bloviating, egotistical, self-reverential and totalitarian, business-vilifying, free market-hating, neo-communist apparatchik-demagogues in the Dhimmi-crat Party.

And, yet, despite being an alleged “policy powerhouse,” NBC fails to note the salient fact that crone Clinton and her boss presided over the most naive, vanity-driven, incompetent and ridiculously ineffectual U.S. foreign policy posture in this country’s history.

One short of a coven.

Great! Just in time for Halloween! Order the custom broomsticks.

What’s the big deal? Joe Biden has been communing with Harold Stassen.

If I was married to either one of these termagants, I’d pray for a quick death. And, if my prayers weren’t answered, I’d gladly commit seppuku with a dull butter knife.

Screech I unites with Screech II. Two negatives make a positive? Or Pinky teams up with The Brain?

Pinky: “So what are we doing today Brain?”

Brain: “Same thing we do every day Pinky… TRY TO TAKE OVER THE WORLD!!!!’

Politicians with similar views talking to each other or working together is “collusion?”

It is interesting to hear they are in communication, but hold the drama please.

Is being against an entitled, criminal candidate who views over half of the country she wishes to govern as deplorable misogynistic?

Communist hags of a feather will stick together.

Wow, this is a gift, can you imagine a ticket more likely to lose HUGE in an election. The campaign ads continue to write themselves.

Just as soon as we find that unicorn …

It sort of scares me cause there are plenty of registered Dems who like one or both of these two POS.

The flip side of this is neither of them are electable, separately or together, by voters intelligent enough to abandon party line voting.