“Hurricane Dorian is the strongest storm to ever threaten the state of Florida on the east coast.” 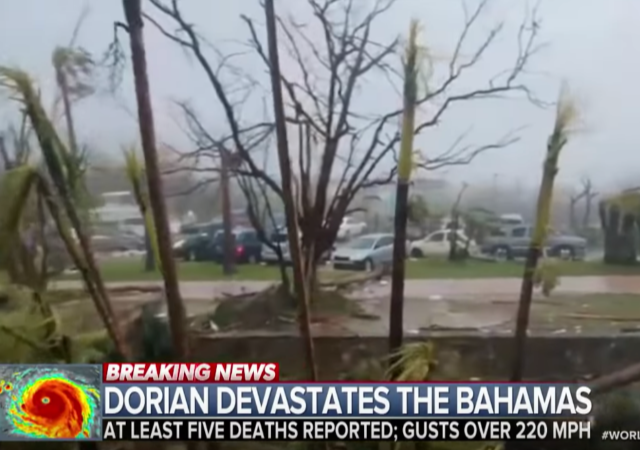 Hurricane Dorian, the second most powerful storm in recorded history to hit the region, has stalled over the Bahamas. As of Tuesday morning, the hurricane is still hovering around Grand Bahama Island. Eastern U.S. is bracing for impact.

Dorian brought gusts of 225mph and up to 30 inches of rainfall on Sunday, wrecked 13,000 homes, tore down power lines and left Grand Bahama International Airport in Freeport under five feet of water by Monday morning. Experts have also warned of a possible storm surge that could send destructive waves crashing into the coast.

Dorian is the second-strongest Atlantic storm on record, and the joint-strongest ever to make landfall, after it barreled into the Bahamas with wind speeds of 185mph on Sunday.

The storm weakened slightly today from a Category 5 to a Category 4 hurricane, the second-highest level, with sustained speeds of 155mph and gusts of 190mph by Monday afternoon. Through the afternoon, Dorian’s destructive eyewall continued to lash the Grand Bahama island.

Meteorologists are projecting Dorian to blast Grand Bahama through Monday evening before moving toward Florida on route to Georgia and the South Carolina coasts.

Officials have reported deaths and injuries while trying to assess the extent of the catastrophic destruction of the island.

At least five people have died and 21 have been injured as slow-moving Hurricane Dorian pummels the Bahamas, Prime Minister Hubert Minnis said Monday, grimly telling the world, “We are in the midst of a historic tragedy.”

Minnis said the deaths were on the hard-hit Abaco Islands, and helicopter crews were evacuating the injured. He also said some people in nearby Great Bahama island were in serious distress, and rescue crews will respond to calls for help as soon as weather conditions allow.

Crews hoping to get a better assessment of the “catastrophic damage” reported in regions like the Abacos were still waiting for conditions to clear up, Foreign Minister Darren Henfield told state broadcaster ZNS.

Americans on the East coast are being asked to evacuate, though it appears that Dorian is anticipated to be a category 2 hurricane when it is likely to hit the Carolinas.

“Hurricane Dorian is the strongest storm to ever threaten the state of Florida on the east coast,” said Jared Moskowitz, director of Florida’s Division of Emergency Management. “No matter what path this storm takes, our state will be impacted.”

…Storm surge is a major threat to the Georgia coastline as Dorian moves north — it could reach 4 to 7 feet by Tuesday night into Wednesday morning.

Those in the Savannah area are urged to prepare for heavy rains, flooding and strong winds.

As of 5AM EDT, Dorian is a Category 3 hurricane with sustained winds of 120mph. The Weather Channel reported “Dorian will have significant, damaging impact from Florida’s Atlantic coast to parts of Georgia, South Carolina, North Carolina and possible southeast Virginia this week.”

Meanwhile, US Air Force Hurricane Hunters went into Dorian and filmed a well-developed eye, which is an indication that the hurricane is extremely powerful. Such missions improve the prediction of storm trajectories by 25%. 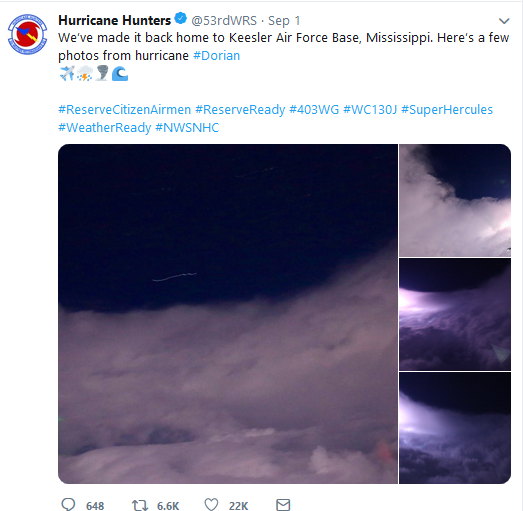 Hopefully, the aircrews saw someone’s “SEND BEER” message, and help is on its way. 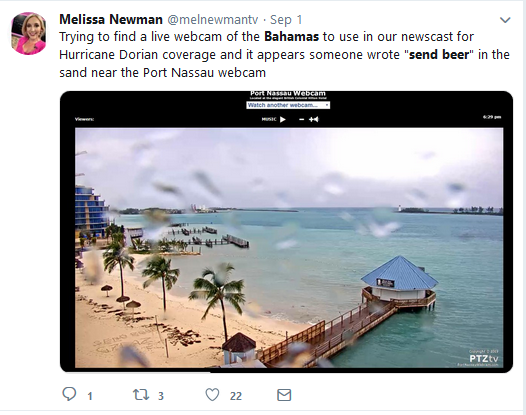 Prayers are being said for the safety of the Legal Insurrection fans that are in the threatened areas.

The island is located within Hurricane Alley, hurricanes are a normal and expected part of their climate. It’s a question of exactly when one makes a direct hit, but over a fairly short period (~10 years) one is expected.

The United States lucked out on this one, while not wishing this on anyone, all else considered, better that they were clobbered than us.

The fat lady hasn’t sung, yet.

Some of the news reports I have been reading make it sound like having a hurricane pause and churn is unusual. In my experience, it happens often enough to be unsurprising. The hazard with a pause over a deep part of the ocean is that the hurricane will gain strength. This pause is over some land and relatively shallow water. Perhaps it will quiet down, perhaps not.

Actually, a major hit on the Abacos is fairly rare. Not sure what you mean by “the island.” There are over 700 islands in the Bahamas. Regardless, some areas have been literally leveled. I’m sending my prayers to my friends there.

“Hurricane Dorian is the strongest storm to ever threaten the state of Florida on the east coast.”

Hell, every storm is now the greatest threat ever. All BS of course.

Up is down, left is right, far is near.

In terms of wind speed, it is the strongest…that’s objectively true.

It also is manifesting right around the highest high tides of the year (King tides).

No, it’s not. Since you do not know the highest wind speed of most hurricanes, you don’t have any idea how it measures up.

By the way, of all the tracks used for data, many are suspect, the data being derived from reports about the storm activity as it crossed islands. Until the satellite images we have poor data, so all sets of data prior to the 60’s is faulty.

Storm strength of hurricanes out in the ocean prior to hurricane aircraft are all unknown. For all we know every hurricane prior to the hurricane hunter aircraft had periods of cat5. Every time a prog tells you the intensity is increasing call them what they are, liars. All our data prior to the 60’s is extremely suspect, all being generated by ground reports without knowing precise storm centers, without knowing the validity of instrument calibration, etc.

What makes a big difference is the advancements in our land/dwelling developments and emergency management, which has evolved significantly since that time period.

Yeah, it does. The port of Houston was created as an alternative to Galveston because of a hurricane. That storm wiped out buildings that had stood for 100 years. Houston has had some direct hits, but it remains some miles inland, and therefore a bit more protected. Granted, building codes have saved us a lot, but when a hurricane attended by tornadoes comes through, there will be destruction.

It is scientifically intolerable to pretend that every first-time reading from new equipment documents an “unprecedented” event. We do not know the intensity of past storms.

Of course it makes a difference. When people try to sell snake oil you need to know the difference.

An hour ago my weather channel switched from storm coverage to real estate ads.

found on The_Donald. Accurate, you make the call. It’s fun though.

The tools looked like fun and tin foil (makes a lovely hat) is waterproof.

How so? Looks like a bunch of deranged nuts to me.

I hate all this hype. Looking at the forecasts, the eye of Dorian will come no closer to Florida than 75 miles and the maximum winds on the coast will never exceed 30 Kts. All these “We’re all gonna’ die!” articles are just click bait.

It may be hype, but if you life in the path or cone, you tend to take things a bit more seriously and at least prepare as much as is humanly possible. We dodged one this time around. Next time? Who knows? Prayers for the people in the Bahamas.

You’re assuming that the tracks hold and the path is accurate.

Dorian was initially projected to be a Cat 1 storm that struck southern Florida on Friday. The projected strike was then on Sunday as a Cat 3 on the Space Coast.

The path was then a Cat 4 rolling up the east coast, half on half off land staying a Cat 4 (gaining / maintaining energy from the ocean as it traveled along the peninsula.)

As early as yesterday, hurricane force winds were still projected on the Space Coast and the barrier islands as the storm moved through the area last night and early today.

None of that happened.

If you think that the tracks are accurate all the time and can predict what will happen, look back at the tracks from last year’s hurricane Irma.

Initially projected to strike the Treasure Coast, Irma in fact moved south of Florida an into the Gulf of Mexico. Projected strikes included Texas, Louisiana, Alabama. Florida was deemed to be in the clear until Irma suddenly decided to make a right hand turn coming ashore in the Naples area – the exact area that many people from the east coast had evacuated to. The storm then rolled came up the peninsula, through Orlando and then eventually exited the state of Florida as a tropical storm and into Georgia and Alabama.

The fact of the matter is that for all the scientists and all the computer models, no one knows for certain the path of the storm until it is over.

These hurricane events are mercilessly hyped, by the media. They have been for years. Now the NHC is over estimating the threat level of these storms, largely to protect themselves from charges of incompetence

Dorian was a very dangerous storm. No question about it. But, in modern times it is a very survivable event. People always look at these things in terms of dollars and cents, after the fact. A month after the storm, a body count of even 200 seems to pale in comparison to damage estimates of billions of dollars. With the exception of third world places, such as Puerto Rico, and idiots who do not have insurance, these “damages” are already paid for, through insurance premiums, or end up costing people a few hundred dollars over a few years for infrastructure repairs. IN the 25 years since Andrew, I have paid nearly $50,000 in windstorm insurance premiums. I have gone through several hurricanes before and after and never had a hurricane related claim. So, if my house had to be rebuilt, the insurance company would not lose a single nickle on my claim. I have already paid for it. And, the same is true for most established insured property.

This is all disaster theater. Know the limitation of your structure. Know the dangers of your location. Have suitable protection in place. Hurricanes are very survivable.

“These hurricane events are mercilessly hyped, by the media.”

Of course. Scaremongering is profitable.

By now, our corrupt MSM has provided more coverage of a hurricane that “might destroy Mar-a-Lago, pinky swear, crossing fingers” than the tsunami that killed 250,000 people in 2004.

Mark my words. Nothing much will happen in the US. Sure, there will be some destruction, but nothing the MSM would dedicate more than a few hours as Global Warming agitprop on page 6.

This insane coverage by our corrupt media, which right-wing outlets seem to be quite happy to parrot, is nothing but a distraction from FISA abuse and conspiracy to commit treason by Obama and his goons.

Funny how Epstein disappeared from the headlines, huh?