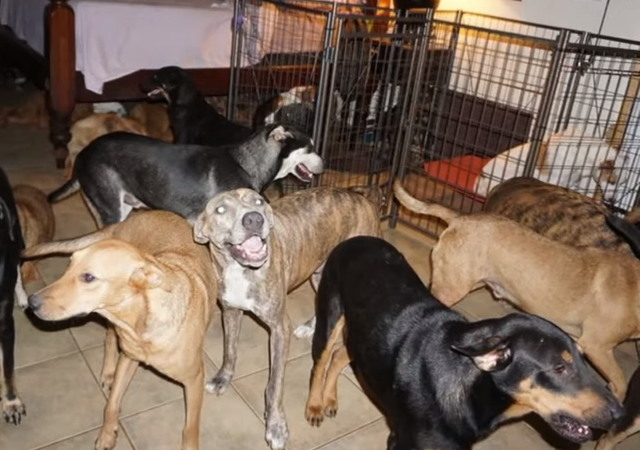 A woman named Chella Phillips of the Bahamas is being praised for her efforts to save dogs during Hurricane Dorian. She took almost a hundred canines into her home during the storm, and now she is being rewarded with donations.

A woman in the Bahamas who has made it her mission to rescue and shelter dogs in her home has taken in nearly 100 strays as Hurricane Dorian lashed the Caribbean islands.

As the storm, then a Category 5, parked itself for a two-day-long stay over the Bahamas beginning on Sunday, Chella Phillips was hunkered down with 97 dogs she had rounded up from the streets and into the safety of her Nassau home, she wrote on Facebook.

She wrote that 79 of the dogs were in her bedroom, and she was cleaning a lot of nature’s callings, but the dogs were “respecting my bed and nobody has dared to jump in.”

“The music is playing in all directions of the house and the AC is blowing for them,” Phillips posted with pictures of the pack of pooches.

She said the dogs were getting along and welcoming “the newcomers with tail wags,” and appealed for people to volunteer to adopt the rescues once the storm passed.

This piece by Morgan Gstalter of The Hill was published Tuesday morning:

A fundraiser to help a woman in the Bahamas who sheltered nearly 100 stray dogs from Hurricane Dorian has reached more than $65,000 as of Tuesday morning.

Chella Phillips wrote on Sunday in a Facebook post that went viral that there were 97 dogs inside her Nassau house, which was barricaded against the Category 5 storm that tore over the islands.

“It has been insane since last night, poop and piss non stop but at least they are respecting my bed and nobody has dared to jump in,” Phillips wrote. “We have barricaded the refuge and nobody is outside.”

Phillips, a dog enthusiast, operates The Voiceless Dogs of Nassau, Bahamas Facebook page to bring awareness to the thousands of dogs roaming the streets.

Excellent work by this lady, and thanks to all the donors also for helping her out with the expenses. Job well done!

At last a story we can all agree about! I have three mastifs, two from rescue shelters and thought I was doing my part. This lady pulled in 97 dogs, I gotta up my game.

Well Hell, I didn’t think I would be down voted on a positive story about rescuing abandoned dogs in a Hurricane. Forgot about the crazy cat lady. Won’t make that mistake again.

When I think of that slime boa Chrissy ford getting nearly 700,000, that we know of
I say let’s get this Wonder Woman and her hoard of howling buddies 700,001!

It’s very kind of her and the donors, but what a shame. We have children that need help desperately. . .

We always have children that need help, it’s the lefts mantra

“What about the children”

There will always be someone or something in need. Happily you get to choose who you help or who you’re able to help and that you are willing to help.

Too many are selfish but excuse themselves because so many need help. As if they had a choice to be wear they are. And lots of people will say that without so much as a moment to discover the truth. Just because there are some who fake being needy does not cause the truly needy to stop needing help. Be wise in your giving.

The reason why this is a nuclear strength dumb idea is right there in the story:

there were 97 dogs inside her Nassau house […] “It has been insane since last night, poop and piss non stop […]”

A hundred feral stray dogs in a barricaded house with a single person trying to look after them. What could go wrong?

She said the dogs were getting along and welcoming “the newcomers with tail wags,”

Right up until one of them decides he’s the alpha and not Phillips.

I only have a weeks’ worth of dog food left and I am now worried that the distribution trucks won’t be delivering for a while, so my mind is racing on how to figure this immediate problem out.

This will end well.

Well, she now has enough money that she can pay a helicopter to bring in dog food. So that’s good.

Just needs to find a way to get in touch with one. Or a boater. She may need water dropped in, too.

It’s not a scam, she didn’t write the headlines, she posted pictures on her FB page which promotes her rescue operation which she has been doing on a shoestring for some years.
She didn’t lie about anything, the media worded it initially as she was driving around or just opening her doors. Doesn’t matter because she has been doing this all along with very little money
Definitely a job many people won’t do
I volunteer at Austinpetsalive. a large dog and cat rescue in Texas and I can tell you it’s hard work and we have 1600 volunteers and savy fundraising but the cost is out in the stratosphere to care for these animal which more often than not are sick and abused when we get them. We are able to save 98% and rehome them, an incredible stat that’s done with hard work 24/7 355 days a year and not for the faint of heart. I think your a sap and she is an angel.

Wow, that’s a lot of fleas.

Many moons ago we had a family cat which decided to give birth to a litter in the cellar. OK, that’s nice, so we fed them down there and let them grow a bit. The fleas got so thick in the cellar that I could see them jumping from the floor onto my legs. Damn, those little bastards can jump.