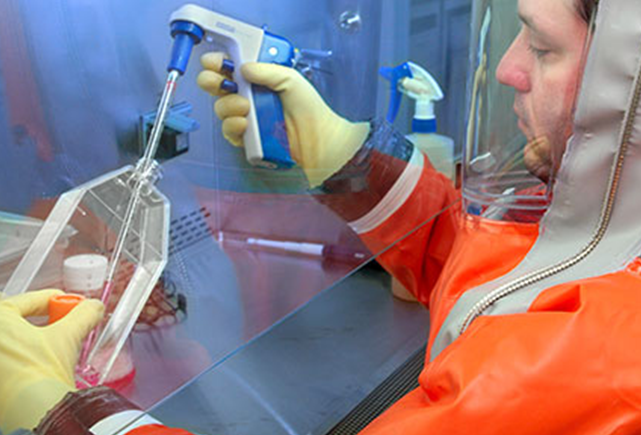 One has to wonder about the state of the Russian military and related research institutions.

First, one of its submarine sinks in the Arctic. The incident claims the lives of elite naval personnel and the nation launches a recovery mission worthy of “The Hunt for Red October.”

Then, there is an explosion at one of its premier military bases. The detonation is followed by a spike in radiation and residents in the surrounding area clamoring for iodine.

Now, an explosion ripped through a virus research center in Russia. The facility is one of two places in the world that store the deadly smallpox virus.

The blast at the State Research Center of Virology and Biotechnology, or “Vector,” left one employee injured and the building, located in Koltsovo, near the Siberian city of Novosibirsk, survived without structural damage, according to a statement from the facility.

The good news is that the pathogen-containment areas are not reported to have been affected by the incident.

“No work with biological materials was carried out in the building,” the statement said. “One worker suffered injuries.”

A spokesperson for Vector told ABC News: “There is no danger to life. There is no biological catastrophe. We are working in regular mode.”

…Founded in 1974, Vector is one of the world’s largest research centers. In Soviet times, researchers at the lab studied potential plagues including anthrax and tularaemia to learn more about creating biological weapons. Vector now develops tools for diagnosing and treating infectious diseases, specializing work on vaccines for swine flu, HIV and Ebola.

The Russians are not noted for being forthcoming when it comes to post-incident reports. Recent updates to the military base explosion seem to indicate that a plume of radiation may have been released when specialists tried to salvage a sunken missile from the White Sea floor.

Documents, photographs, satellite imagery, and other open-source materials reviewed by RFE/RL point strongly to an accident — most likely underwater, or just near the surface — as the cause of the August 8 blast in Nyonoksa, where Soviet and Russian military planners have conducted missile tests for decades.

…Satellite images and websites that track global shipping traffic have also identified the presence of a Rosatom ship called the Serebryanka that was in the Dvinsk Bay in the days leading up to the August 8 explosion. The ship is known for its role in transporting nuclear waste for the atomic energy company.

The ship was located 4 kilometers from Nyonoksa on the day of the blast and was tracked leaving the region and returning to its home port of Murmansk on August 9.

There is little new information available about the Losharik, the sunken submarine. The Strategy Page, which covers military affairs and has military-political analysts such as Jim Dunnigan and Austin Bay, indicate that lithium batteries were the root cause of that disaster.

The July 1st Losharik accident was caused by the lithium batteries overheating, causing a fire and then exploding. This killed fourteen of the 19 men abroad the submerged sub. The four surviving crew and one civilian specialist managed to surface the sub, shut down the nuclear reactor and get off onto the modified SSBN that serves as its mothership. Before the surviving crew left they were ordered to flood all compartments, to ensure that there was not another fire or explosion. The Defense Ministry says it will get the Losharik back in service but they are still studying the damage and getting estimates of how long repairs would take and how much it would cost. The cost may be more than Russian can afford right now, no matter how important Losharik is to Russian undersea operations.

There are still questions about the batteries the Losharik used. The sub was originally designed to use Ukrainian made silver-zinc batteries but since 2014 Ukrainian military imports have been less “available” and Losharik switched to Russian made lithium batteries, which behave differently than silver-zinc ones. Lithium batteries will catch fire and explode if they are short-circuited. How that happened on Losharik is still unknown, much less how to avoid it.

It will be interesting to see if there is another significant incident involving extremely hazardous biological or radioactive materials occurring in Russia in the near future.

Obviously this would not have happened if the US joined the rest of the civilized world and banned the possession of the scary AR-15 automatic assault rifles.

Who knew that the Ukraine made any worthwhile product any more?

No problem. They’re shipping the remnants to obama’s house.

Is there a record of this lab producing anything other than biological weapons?

Siberian Times will probably have local video of this latest “event” posted soon.

Socialism at it’s finest. Putting incompetent people in charge, permit them to make decisions that affect the lives of the people, and then lie about it. The media will then parrot the “Party talking points” in a repetitious manner until everyone is convinced that all is swell. Even as others die around them.

And then there is Russia.

We can all pray that this is all there is to the story.

Didn’t WORLD WAR Z start out something like this?

Does the author imply something more nefarious that just a long string of ‘accidents’.

Remember the nuclear submarine Kursk that sunk in 2000 or 2001 with hundreds on board? Grounded their sub fleet for a one time. Chernobyl anyone? The Russians/Soviets have a terrible track record.

Their record may have something to do with very high consumption of vodka.

Also, damage to their gene pool as a result of Chernobyl may be a factor.

i’m curious, did elon musk visit russia recently? did the batteries on the sub come from tesla?